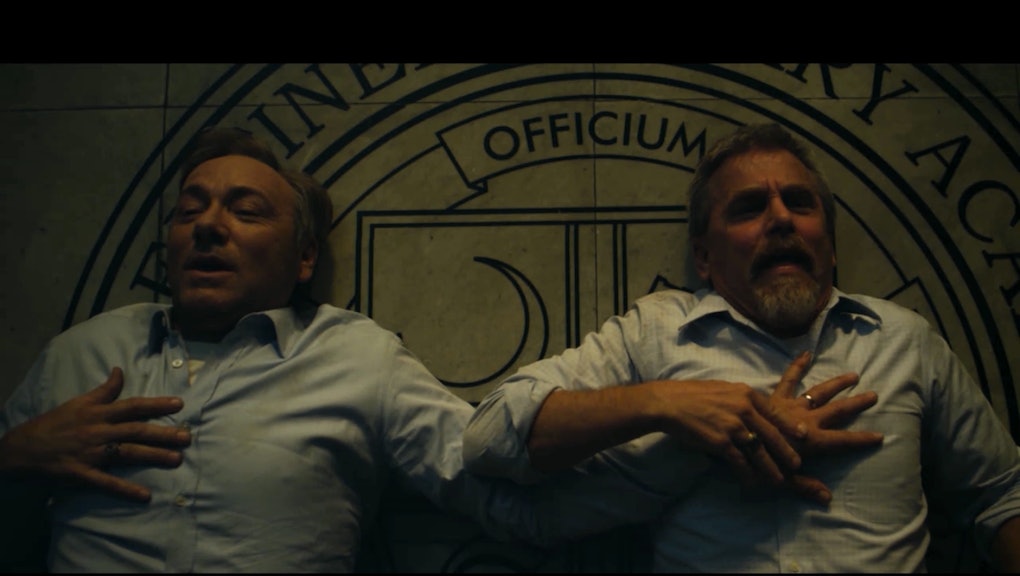 Another character goes from sleeping primarily with men to falling deeply in love with the nice Christian woman she met on the bus (all while listening to sad music that I can only hope was Ani). And, perhaps most revolutionary, is the fact that no one on the show makes a big deal about any of it.

It has become trendy to include a token queer person on TV these days. Tossing a (typically white, upper-middle class male) gay character into a show is basically putting a bird on it. A glittery, sassy bird. But these characters are rarely defined beyond their queerness — just look at Kurt Hummel on Glee or Elijah on Girls. They come out (as if it's a one-time thing) or can't come out, are bullied, are lonely and so on. So often their stories are no more than a "struggle narrative" that resorts to stereotypes in lieu of actual character development.

Well, I'm sick of the struggle narrative. As a queer-identified trans guy, I struggle enough on a daily basis, between dealing with gendered bathrooms and confused security guards questioning my ID (and don't even get me started about flying) that I don't need to see more of it on television. And my "struggle," whether it's hormone injections or fighting with my health insurance provider about surgery options, does not define me.

'House of Cards,' more than any other show currently on the air, is providing its audience with interesting, complicated queer people without making a fuss about it.

This isn't to say that narratives of oppression in TV and movies aren't important, because they certainly are; queer people, particularly queer people of color, face violence and institutionalized discrimination every day. But that violence can't be the only story told.

With so little else depicted on screen, this struggle can appear to be the defining element of an LGBTQ person's life. When I came out as trans, for example, part of what scared me was watching Brandon Teena, the only transgender man I'd ever seen in movies, get brutally raped and murdered in Boys Don't Cry. If we really care about representation and progress, queer characters should be given the same range of narratives as, well, straight ones.

Entertainment has obviously come a long way since the gay killers straight out of Hitchcock's Rope, but even the women of the wildly popular Orange Is the New Black constantly remind us of their lesbian status (plus, it's telling that the only setting a mainstream, queer-filled show occupies is a prison — although the show gets a little more leeway for giving us the amazing Laverne Cox).

The only queer characters allowed in complex story-lines beyond their queerness that I can think of are Omar Little and Kima Greggs from The Wire, but the critically-acclaimed HBO drama is more urban ethnography than prime-time television.

House of Cards, more than any other show currently on the air, is providing its audience with interesting, complicated queer people without making a fuss about it. Sure, Frank Underwood is a murderer with a pragmatism that verges on amorality, and I doubt we'll see him pinning a rainbow flag to his lapel anytime soon, but his bisexuality is treated with as much pomp and circumstance as are his brown eyes. Rachel Posner's lesbian relationship may be doomed from the start, but not because she needs to "go back to men" or any other post-sweeps week cliché. In short, House of Cards doesn't treat queerness like a spectacle.

The struggle narrative may be important, but queer characters and audiences deserve more. Those lonely Midwestern kids (who may be bullied, unable to come out, dealing with unsupportive friends and family — or worse) should get to watch versions of themselves on screen that are as complex and authentic as they are, not hollow stereotypes.

Or, as Frank might say to shows that insist on featuring the same tired tropes, "I just hate this small ball crap."