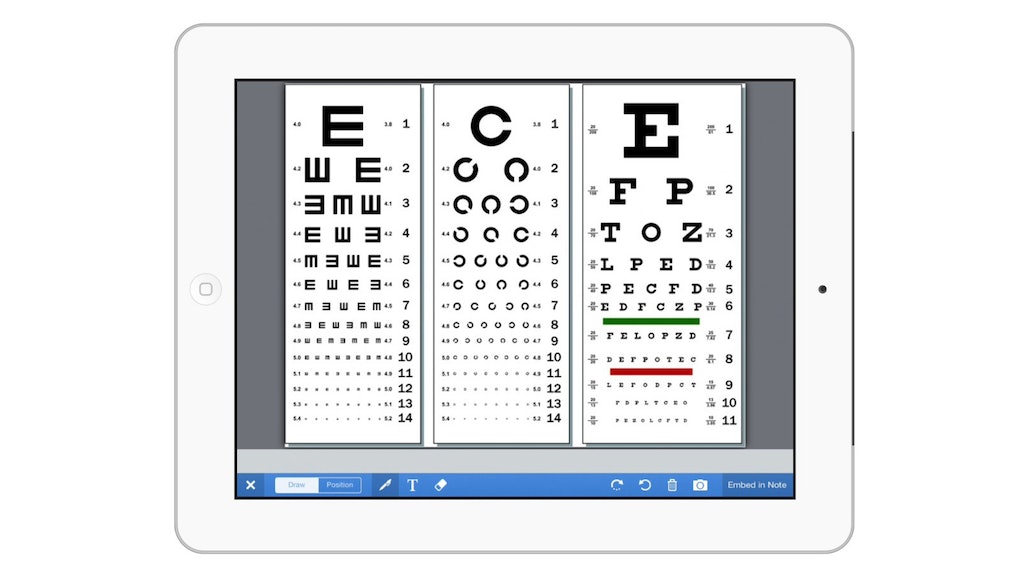 A visionary app: A commonly misunderstood brag is to mention that you have 20/20 vision. While that’s great because it means that you have healthy eyesight, it’s actually possible to have up to 20/7.5 vision. And yes, there’s an app for that.

Researchers at the University of California, Riverside have created a two-month training program that is designed to boost the average person’s eyesight significantly. The program consists of 25-minute visual “workouts” that are done on an iPad every day, and tasks users with tapping a series of on-screen targets as quickly as they appear. As the game goes on it gets harder by introducing a series of decoys and progressively dimming the screen. This app, called UltimEyes, pushes the players’ vision to the limit.

Image: Screenshots from the UltimEyes app on the iPad

Spring training: A baseball pitcher can throw a fastball over 100 miles per hour. This means the ball travels from release to plate in a mere blink of an eye. While physical attributes such as speed and arm strength are valued assets in the sport, one underrated but crucial quality is vision.

Researchers thought baseball would therefore be the best test of the program’s abilities. In a study published in Current Biology, researchers added the vision improvement app to their UCR’s baseball training regime. The result? The team recorded higher-than-average improvement in batting averages and strikeouts, an advantage which is estimated to have led to 5 more wins in the 2013 season. Thanks to UltimEyes, many players improved their vision from 20/20 to 20/10, with a few even reaching 20/7.5.

These results are consistent with studies from Major League Baseball. Several players from the World Series-winning Boston Red Sox have recorded 20/8 vision.

Image: Kevin Youkilis has 20/11 vision and Dustin Pedroia has 20/10 vision

Why does it work? How can you have better than 20/20 vision? What 20/20 vision means is that if you stand 20 feet away, you’re able to resolve features as well as an “average” person standing the same distance. But this doesn’t imply perfect vision. People with 20/10 vision for example, will be able to see what “average” people can see from 10 feet while 20 feet away.

According to the National Health and Nutrition Examination Survey, less than half the U.S. population have 20/20 vision. Around a third of people are near-sighted and one-third have a form of astigmatism. These actually bring the average down, so when you consider only the third that have healthy eyes, most studies observe an average visual acuity closer to 20/16. Unsurprisingly, on average most baseball players fall around this number and the highest athletes are closed to what we believe is the human limit for perception at around 20/8. In comparison birds like the eagle, which need to spot the movement of tiny prey whilst in flight have much better vision than humans at 20/5 and better.

So how does the app help to improve vision? Perhaps counterintuitively, it has nothing to do with strengthening the eye muscles. The program helps to improve vision by rewiring the brain. “Within the last decade or so we’ve started to learn that brain fitness is a bit akin to physical fitness,” says  Aaron Seitz, one of the project’s neuroscientists. “If we exercise our brain in the proper ways, pretty much everything that the brain does should be able to be improved.”

This process known as neuroplasticity can’t fix the eye from physical impairments like astigmatism. But what it does do is train your brain to process vision better with what you do have. This works because in the game the patterns that are presented to you are very similar to those which the brain’s visual cortex would break down an image to for processing. The theory is that direct exposure to this process will  improve your brain’s ability to create clear vision at farther distances.

Although these results are encouraging, there’s a lot about neuroplasticity that we don’t know yet. Researchers are unable to explain why the app is more effective on some than others, or for how long after training will the improvement last. Still, this study has neuroscientists excited about the potential of neuroplasticity to unlock physical potential. Researchers hope that in future similar methods could be used to improve hearing, for example to enhance language comprehension in people with traumatic brain injuries,  or enhancing memory.