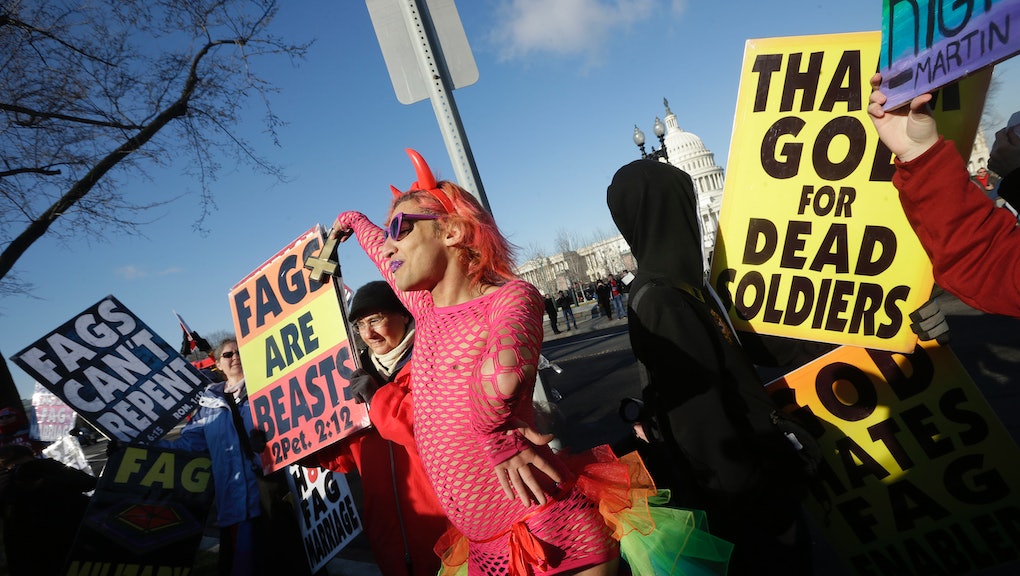 Homophobia Is So Toxic, It Can Actually Kill You

A controversial new study has found that being homophobic is really bad for your health — it may reduce your life expectancy by as much as two-and-a-half years.

Columbia University researchers Mark L. Hatzenbuehler, Anna Bellatore and Peter Muennig were curious about the impact of anti-gay prejudice on the health of prejudiced heterosexuals. Specifically, would that prejudice lead to an increased mortality risk? To measure this, the researchers compared attitudes of over 20,000 people interviewed by the General Social Survey from 1988-2008 with the National Death Index. Prejudice was measured by questions like: "Do you think that sexual relations between two adults of the same sex is always wrong, almost always wrong, wrong only sometimes or not wrong at all?"

Image Credit: Anti-Gay Prejudice and All-Cause Mortality Among Heterosexuals in the United States

So were homophobes more likely to have passed away by the end of the study? Indeed — much more likely. Even when controlling for confounding variables like income, education level, age at the time of the interview and self-rated health, heterosexuals with anti-gay prejudice died about 25% faster than heterosexuals with lower anti-gay beliefs.

As queer health blogger Bill and Tuna pointed out, "[This is] promising work, but when you see over 80% of the apparent effect (an excess hazard ratio of 187% dropping to 25%) after being "explained" by control factors, what's left has to be treated very skeptically."

The results parallel several recent studies' findings on racial prejudice. There's a higher mortality risk for prejudiced whites as well as blacks who have suffered from prejudice. Researchers believe the deaths may be stress-related, since prejudiced whites experience increases in the stress hormone cortisol when interacting with blacks.

If this all isn't reason enough to chill out about who's sleeping with whom, Hatzenbuehler also found that living in a homophobic community shortens LGB individuals' life spans by 12 years.

Thank goodness anti-gay prejudice has been rapidly declining for years. All that hate is really a killer.