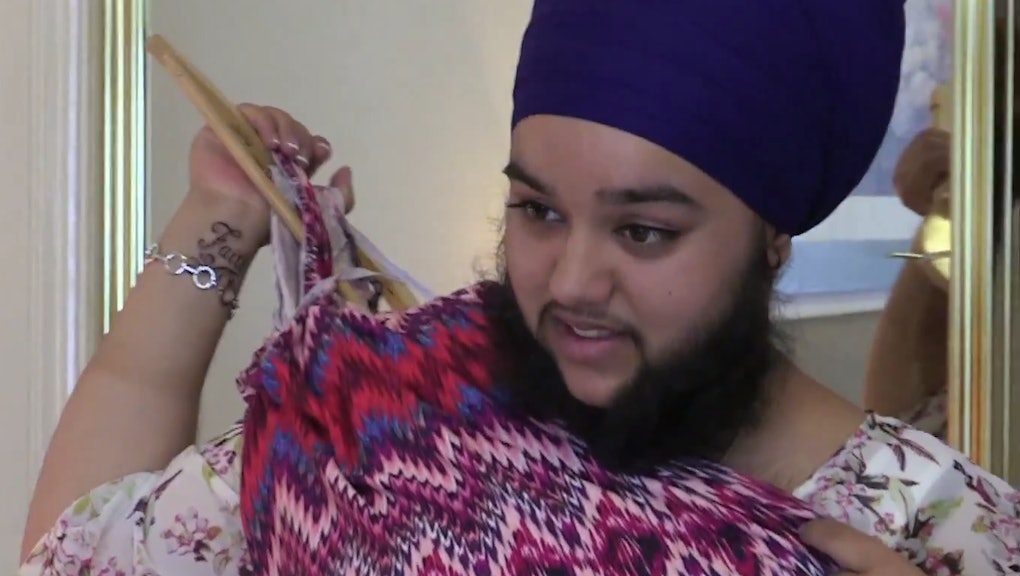 Woman Gets Bullied for Her Beard, So She Shows the World What Real Beauty Looks Like

While her classmates were worrying about getting their period and filling out training bras, 11-year-old Harnaam Kaur was growing a beard.

The now 23-year-old teaching assistant from the U.K. suffers from polycystic ovary sydrome, a condition that can cause excessive hair growth. Middle school hallways aren't the most accepting of places, so when her beard first appeared as a preteen Kaur was understandably distressed.

"The names that people would call me were things like 'beardo' instead of weirdo, 'sheman,' 'shemale'," she said in a video for Barcroft TV. She began waxing twice a week in order to better fit in with the other girls at her school, but the constant scrutiny wore her down. At one point in her teen years she even considered suicide.

But when Kaur turned 16, she was baptized as a Sikh. Following the tenets of her religion, she decided to let her hair grow freely. After briefly caving to pressure from her extended family and shaving the hair off one year later, Kaur vowed never to do so again. "When I'd done it, all I could do was cry because I didn't feel like myself," she said. "My brother ... hugged me and said I had looked so beautiful with my beard, he didn't understand why I had done it. It was from that point that I thought I'm never going to remove it ever again."

Kaur with her brother and a friend. Image Credit: Barcroft TV via YouTube

Kaur's incredible confidence flies in the face of the modern beauty standards with which girls are constantly confronted. Women are taught from a young age that our body hair is something offensive to be removed; our bodies are waxed, plucked, shaved, bleached and air brushed in an effort to reach the outrageous ideal of neck-down alopecia (h/t Tim Minchin).

But Kaur has refused to let societal dictates of femininity determine how good she feels about herself. In fact, she has a girly streak that she feels in no way conflicts with her facial hair. Kaur said, "I feel more feminine, more sexy and I think I look it too ... I've learned to love myself for who I am nothing can shake me now."

Given the pressures women are under to conform to accepted ideas of beauty, that is pretty damn impressive. And though she says she still has to deal with stares and even receives death threats ("I've had people telling me they're going to burn me, they're going to throw a brick at me," she comments in Barcroft TV's clip), she's also received genuine messages of praise from men and women across the globe.

Kaur is courageously showing the world that it's possible to love yourself just the way you are, and she hopes her story will inspire a similar confidence in other women. "This is me," she said. "This is who I am. It's my inner beauty, it's my outer beauty. It's my oneness, it's my wholeness. I'm different, and I've learned to accept it — fully."