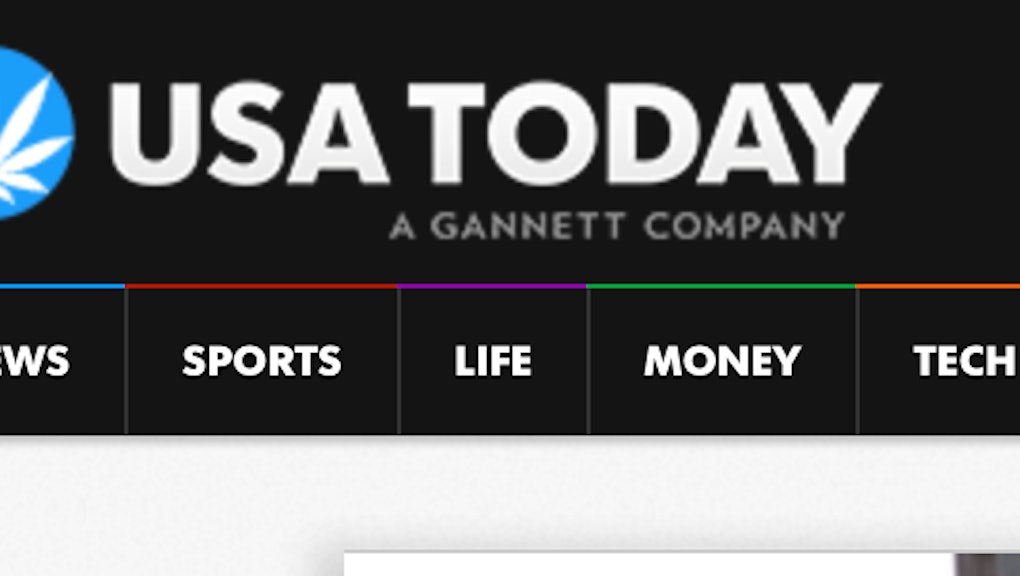 Anyone Else Notice This Yesterday? A Major U.S. News Site Proudly Supporting Marijuana

On Tuesday, USA Today's logo was changed to a marijuana leaf in what appeared to be an act of advocacy for marijuana reform.

The logo ran on the same day as USA Today ran a feature story on medical marijuana laws in Colorado — which was on the use of certain strains of marijuana extracts high in cannabidiol (a chemical found in marijuana that has medical uses) and low in tetrahydrocannabinol (THC, which causes users to get high) in the treatment of children with various disorders, including epilepsy.

So is USA Today backing marijuana legalization? Well, you could compare their logo switching to another big web operation, the Google Doodle. USA Today regularly updates its banner to reflect the flavor of the day.

The logo was redesigned in late 2012 to be "as dynamic as the news itself," and rather than being a static image becoming a "live infographic that can change with the news." It also is changed consistently throughout the print edition, turning a logo that was previously instantly recognizable but not particularly pretty into a modular part of their design:

So it's probably mainly an attempt to theme the site in support of a major story the magazine would like to promote rather than a call-to-arms. But as far as advocacy goes, it's still pretty telling that a major U.S. news site is totally comfortable with flying the pot leaf at the top of its homepage. Can you imagine the controversy that could have generated just a decade or two ago? With full-on recreational legalization of marijuana in Washington state and Colorado and reform coming to other states in the near future, it seems like the forces for ending the war on pot aren't just winning. Marijuana is becoming normalized.