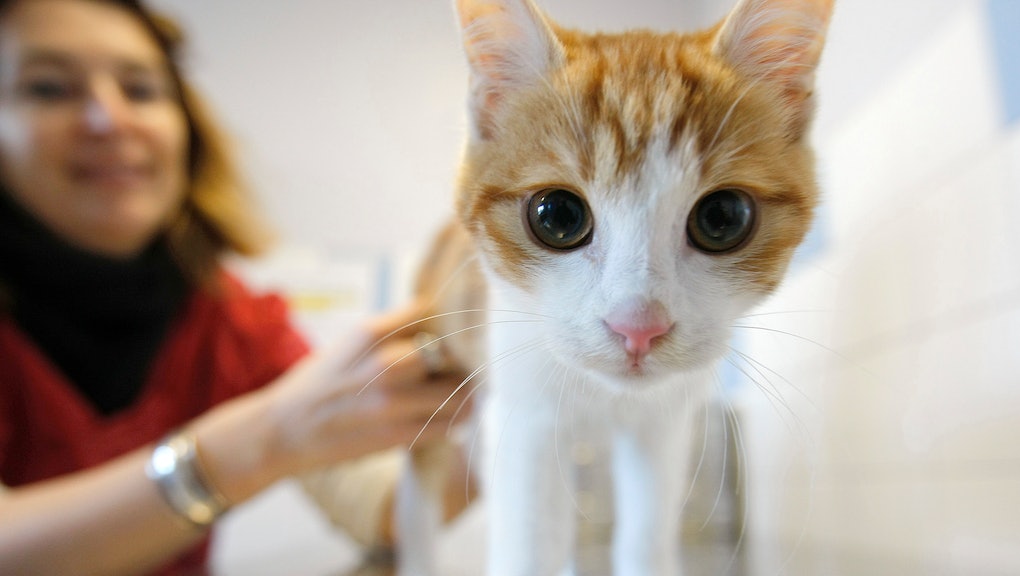 Your Cat Can See Things That Are Invisible to Humans. Your Dog Probably Can, Too.

This just in: No matter how long you've spent tripping out in your freshman dorm eating Doritos, your pet cats and dogs see way crazier things than you. For a while now, we've known that some animals have different sight advantages and disadvantages compared to humans. For example, cats have a wider field of view — about 200 degrees to humans' 180 — and good night vision, but they can't see as many colors, or as sharply.

But a new paper published in the Proceedings of the Royal Society B found that cats, dogs and certain other animals can detect ultraviolet (UV) light, which is usually invisible to humans. "It has been known for nearly a hundred years that many invertebrates, such as bees, see UV," co-author Ronald Douglas, a professor of biology at City University London specializing in the visual system, told Discovery News.

It's also been assumed that most mammals lack the visual pigment necessary to sense UV light, and instead have lenses that prevent it from reaching the retina. But this new study reveals that cats, dogs, rodents, hedgehogs, bats, ferrets and okapis all have the necessary pigment to detect substantial UV levels. "Examples are patterns on flowers that indicate where nectar is, urine trails that lead to prey, and reindeer could see polar bears as snow reflects UV, but white fur does not," Douglas said.

That means cats, dogs and reindeer can pick out a small bunny hopping through a blizzard, where we'd see nothing more than a white haze. Furthermore, cats are sensitive to very bright pigments like psychedelic stripes on flowers and flashy patterned feathers. This, according to Douglas, might also explain why cats become easily obsessed with seemingly simple objects like sheets of paper, fabrics, cosmetics and shampoos, which sometimes possess man-made optical brighteners. Of course, this also means humans miss out on some less interesting things, like streaks of urine everywhere.

The study's other co-author Glen Jeffery, a professor of neuroscience at University College London, also explained that we tend to assume UV light is harmful to our eyes. "I work a lot in the Arctic where UV levels can be very high, particularly in spring and early summer when there is still a lot of snow and ice," Jeffery said. "These surfaces reflect 90% of the UV, so the animals are exposed from above and below. If you do not have snow goggles on, your eyes hurt within 15 minutes." However, studies have found that reindeer have no problems dealing with intense UV exposure, and are therefore able to survive and thrive in a seemingly harsh environment.

The ability to see all this extra stuff seems like a sweet deal, right? Well, UV-detecting lenses may give these animals more detailed vision and protect them from prolonged UV exposure, but they also create blurrier images. "Now, if there is one thing humans are good at, it's seeing detail," Douglas said. "Perhaps that's why they have a lens that removes the UV. If they didn't, the world would appear more blurred."