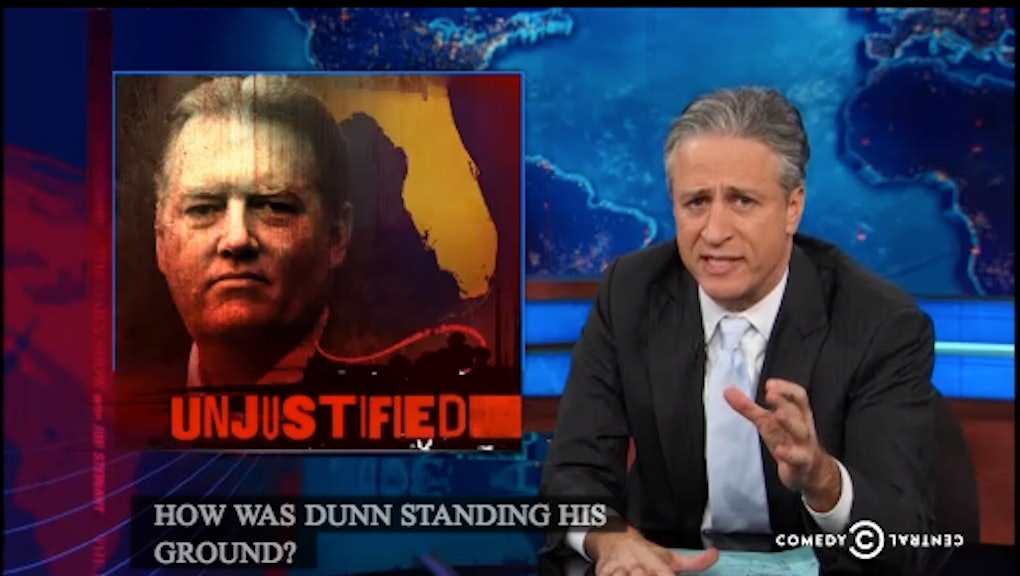 The news: It was only a matter of time before The Daily Show weighed in on the Michael Dunn verdict. In last night’s episode, correspondent Jessica Williams called it “the cherry on top of the shit sundae that is Black History Month,” among other things. More in the video:

The irony of Dunn being convicted for trying to kill Jordan Davis’ three friends, but not for actually killing Davis, was not lost on Stewart: “So the message in Florida is pretty clear,” he said. “If you fire a gun, you’d better f*cking hit somebody. ‘Cause if there’s one thing Floridians won’t tolerate, it’s survivors.”

Williams explained the Davis shooting through the concept of “fear goggles,” or “the lens through which chronically terrified white people look at black kids.” She closed with some advice for black youth: “Kids, stay in school,” she said. “By which I mean if you’re at school, stay in the building. If you’re at home, stay at home. Don’t go wandering into the street where you might scare a white person.”

The background: On Saturday, a Jacksonville jury convicted 47-year-old Michael Dunn on three counts of attempted murder. In Nov. 2012, Dunn fired 10 gunshots into a car full of unarmed black kids, killing 17-year-old Jordan Davis. But the jury failed to reach a decision regarding Davis’ death, resulting in a mistrial on the first-degree murder charge.

The incident has been conflated with Florida’s controversial “Stand Your Ground” law, which empowers citizens to use deadly force if they feel their lives are being threatened. Dunn’s defense did not actually invoke SYG, but the law’s “self-defense” rhetoric is thought to have influenced the trial’s outcome. It was also used to successfully acquit George Zimmerman of murder in 2013, in the racially-charge Trayvon Martin case that many feel bears similarities to the Davis shooting.

Dunn faces over 60 years in jail for the second-degree murder charges. Many view the outcome as a miscarriage of justice, and have used numerous avenues to vent their frustration. Unsurprisingly, The Daily Show strikes at the core of the issue with its trademark acid-laced humor. It’s what we’ve come to expect from them.