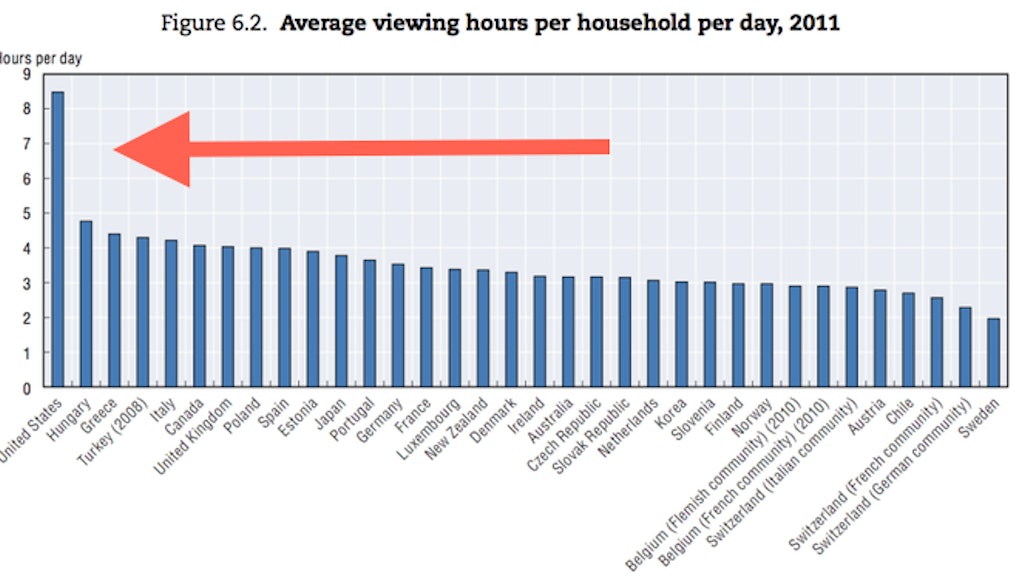 The news: According to a recent study, television is more than just a pastime for Americans. It’s a way of life.

The Organization for Economic Cooperation and Development (OECD) has 34 member countries, including all of North America, Australia, much of Europe, Chile, Japan, Korea, Israel, and Turkey. Using data sourced from the Federal Communications Commission (FCC), the study determined that members of the average American household collectively watched more than eight hours of TV per day in 2011. That’s almost twice as many as Hungary, the OECD’s second most avid consumer.

How is this possible? It’s difficult to say. These figures don’t reflect household size — OECD data from the mid-2000s indicates that the U.S. was near the median in that respect. However, TV watching does increase with age, and according to the United Nations, the U.S. does have the second-largest over-80 population in the world.

Another item to consider is how people consume TV content these days. The study acknowledges that a “convergence” of viewing methods, from online and mobile to DVR, combined with inconsistencies in how data is collected from one country to the next, complicates the numbers. Still, the OECD remains confident that at least “the U.S. data… [is] accurate,” according to Quartz’s John McDuling.

Unsurprisingly, Millennials are the biggest consumers of online video, resulting in lower TV viewership in the 18-34 demographic. According to Mashable, research conducted by The New York Times and presented at the International News Media Association’s Audience Summit indicates that 34% of Millennials in the U.S. consume most of their TV content online:

Reasons given for this include more immediate access, customization options, and shareability:

Tell us something we don’t know. These numbers are important — especially for media companies — because online TV consumption is such a new process. It’s unclear whether increased traditional TV consumption coincides with the aging process, or actually constitutes a generational shift. Logic suggest that how we watch TV now mirrors how we’ll watch in the future, but only time will tell.

Meanwhile, it remains unlikely that any other country will outstrip Americans’ thirst for TV.