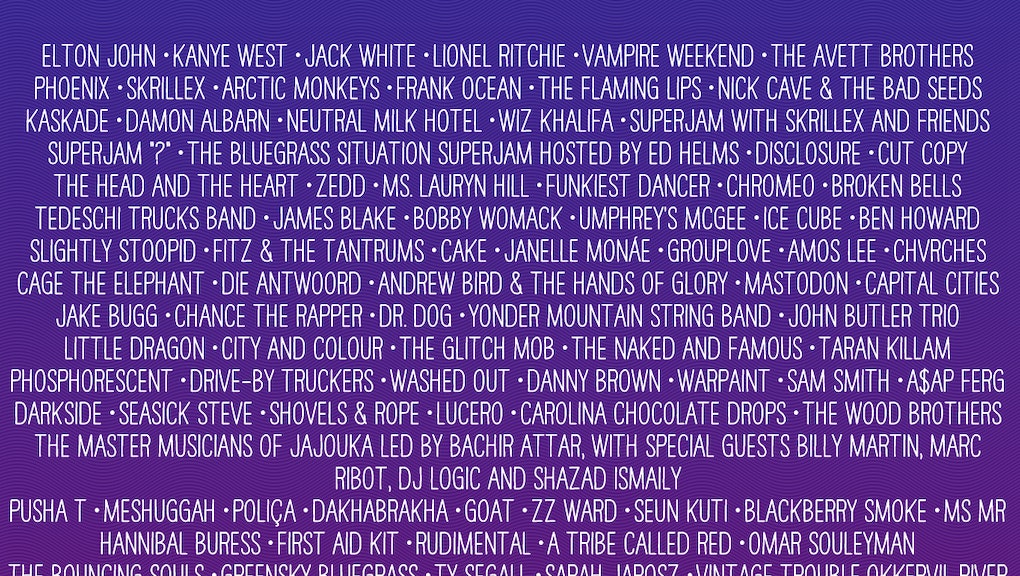 The 2014 Bonnaroo Line-up Has Been Announced, and It's the Best Festival This Year

There's a quiet 700 acre farm deep in Manchester, TN. For most of the year, not much happens in Manchester — it's about as predictable as the menu at the local Coffee Cafe. But for four days every year since 2002, Manchester has been overrun by 80,000 filthy, happy and freaky music lovers listening to the very best of contemporary music. And it's about to happen again.

On Wednesday night, Bonnaroo announced the acts for 2014. They're amazing:

It's hard to imagine a more stacked line-up. Now that the legions of Bonnaroovians know pretty well what they'll be hearing at Centeroo as they become slowly more dehydatred, less cogent and more odorous, it's easy to start anticipating the fest ahead.

Though the roo seems like the only festival in the country not to be featuring an Outkast performance, the big-name acts are pretty incredible: Elton John, Kanye West, Jack White, Lionel Ritchie, Vampire Weekend, The Avett Brothers, Phoenix, Frank Ocean, The Head and the Heart, James Blake, Broken Bells, Janelle Monae, Little Dragon, Drive-By Truckers, Washed Out, Danny Brown, Warpaint, Phosphorescent and Ms. Lauryn Hill. And they'll share the festival's many stages with a host of smaller but equally awesome acts like White Denim or Lake Street Dive.

It's a great year for folk, especially. Last year, Mumford & Sons had to cancel on their headlining spot forcing everyone to get their heart-on-the-sleeve folk fix from The Lumineers set. But this year the festival has an incredible folk line-up — beginning with The Avett Brothers and working its way down through acts like Jake Bugg, Phosphorescent, Shovels & Rope and The Head and the Heart.

Time to start saving up for some I Heart Spicy Pie slices. It's going to be a good year.