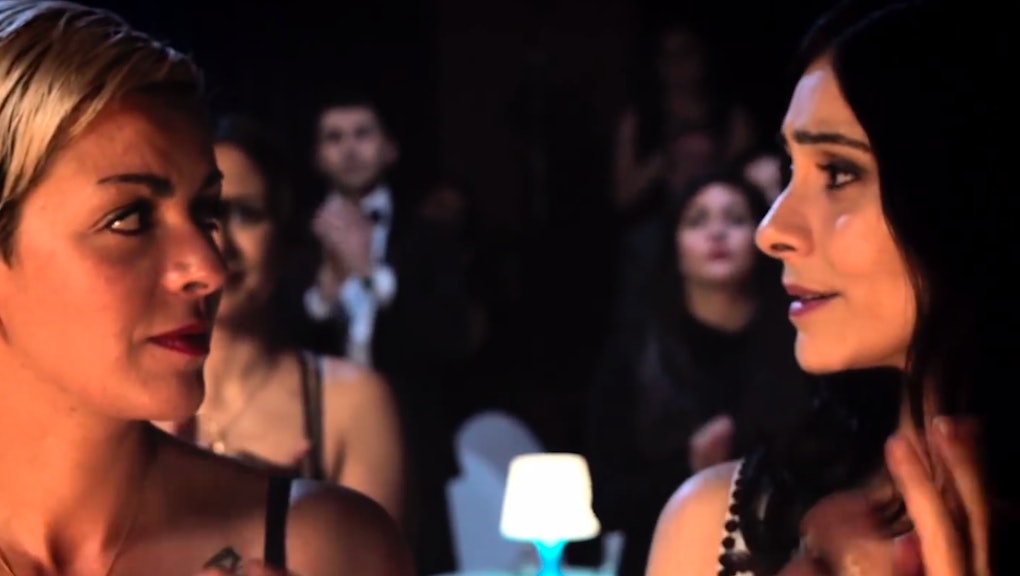 Iran's reigning queen of pop, Googoosh, just made history in the global LGBT rights movement. The artist released a music video that strongly denounces homophobia and sticks up for the freedom of LGBT individuals.

Such an act may not make headlines in other countries, but this is a huge deal for Iran, a deeply conservative theocracy where LGBT individuals don't just face discrimination, they face imprisonment or even death if found guilty of violating anti–LGBT laws.

Googoosh released the music video on Valentine's Day, which features a lesbian couple, for her song "Behesht (Heaven)." Watch it here:

That Googoosh made a video portraying a lesbian relationship in a positive, sympathetic light is remarkable on its own, but the song's lyrics make this an even more powerful statement of solidarity. Googoosh sings, "Don't tell me to stop loving, you can't do that and I can't either ... I know (they say) these feelings should not be, but they are."

Unsurprisingly, the video has been banned in Iran, but many Iranians have reportedly viewed it through uncensored, illegal satellite channels. Navid Akhavan, the video's director, told the Guardian, "The comments I have read online and the messages I have received from people within the Iranian LGBT community have brought tears to my eyes."

Googoosh, 63, is the most prominent Iranian celebrity thus far to publicly support LGBT rights. She has enjoyed a successful career that began long before the 1979 revolution, and many Iranians adore her for choosing to stay in the country afterward (many other entertainers fled after the establishment of Islamic law).

Despite her overwhelming popularity, Googoosh put herself in danger for taking this stand. Conservatives in Iran have harshly denounced her, using the Internet to not only criticize her support of the LGBT community, but to question her allegiance to Iran.

One video might not change anti–LGBT attitudes in Iran overnight, but it's a start. The LGBT community in Iran and around the world has gained an influential ally.