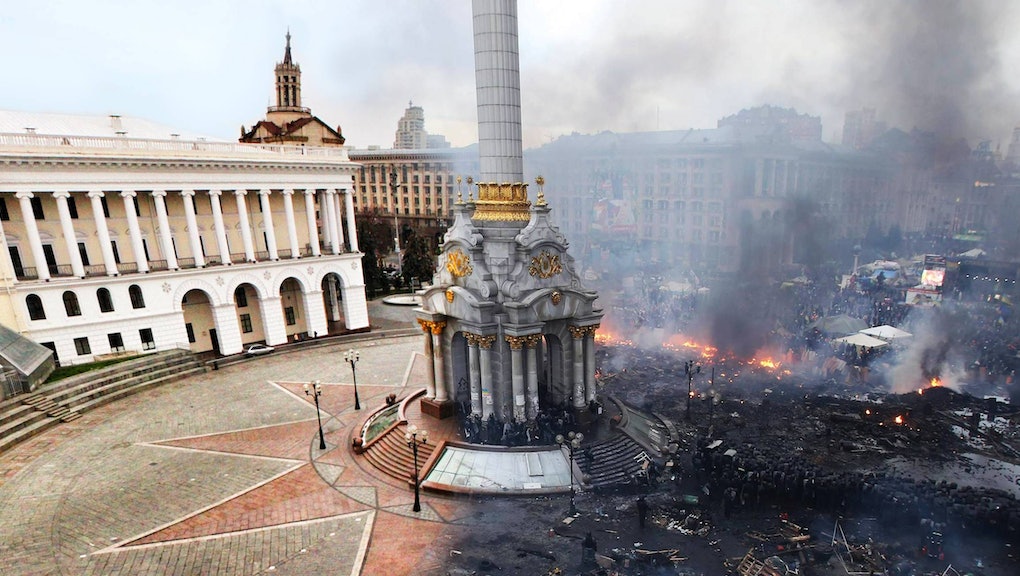 Kiev is not a very nice place to be right now, as this stunning photo merge of Kiev's Independence Square before and after recent protests shows us.

Protests against beleaguered Russian-allied President Viktor Yanukovych have turned incredibly deadly, with doctors working with the protesters claiming as many as 70 dead. Some 550+ have been injured, many seriously.

Protesters and police alike have repeatedly broken various cease-fires and truces, with some on the side of the opposition fearing that the president is merely stalling while the government begins to deploy troops to the capital.

According to many news sources, government forces have been cleared to use live ammunition. Much of the area around Independence Square is on fire, while right-wing vigilantes are hijacking the chaos for their own violent purposes.

But it seems unlikely that the government is going to back down.

Unfortunately, Russia has much more at stake than the protesters' allies in the West. "For Russia, retaining its influence over a former Soviet republic with 46 million people is nearly essential for the country to maintain its geopolitical influence," says NBC News' Andrew Rafferty.

And as The Week's Peter Weber writes, "it is exercising that influence in the Ukraine through a democratically elected president, Yanukovich, and what amounts to legal bribery ... which apparently extends to encouraging or coercing Yanukovich to use violence to end the months-long protest."