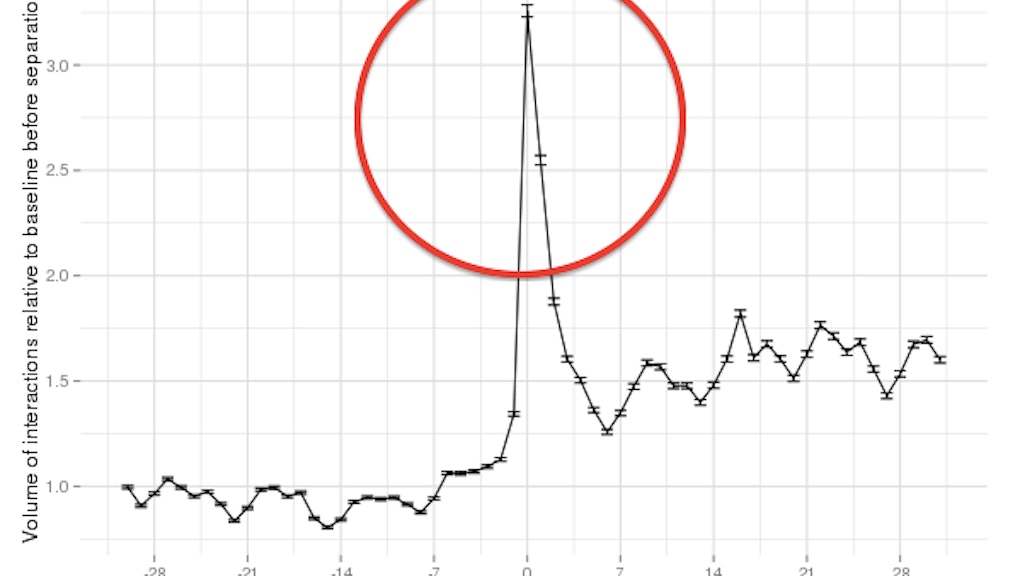 This Is What Happens Before and After a Facebook Breakup

The social networking site recently revealed how it predicts when you’re going to start a relationship. Now it’s released a chart tracking your Facebook activity before and after a breakup. The results are telling:

Need a hug much? The graph shows a staggering 225% spike in activity as the breakup occurs, followed by a week-long stabilizing period that ends with higher levels of activity compared to your "relationship" self. The Facebook Data Science series attributes this to "people receiving support [from] their friends in times where they need it, whether it comes in the form of private messages, timeline posts or comments."

Facebook’s Adrien Friggieri explains the methodology: "[We] studied a group of people who were on the receiving end of a separation," he writes. This meant those who had been "Facebook-official" for at least four weeks before switching their status to "Single." Results was measured based on the number of messages participants sent and received, the number of times others posted on their timeline and how often others commented on content they posted. Data was gathered from one month preceding and one month immediately after the breakup.

The silver lining: It’s nice to see people getting the post-heartbreak support they need.

The Facebook Data Science series offers these studies as part of a Valentine’s Day "week of celebrating love and looking at how couples blossom." How crushing, yet appropriate, that they chose to end it with a breakup.

And I never even saw it coming.