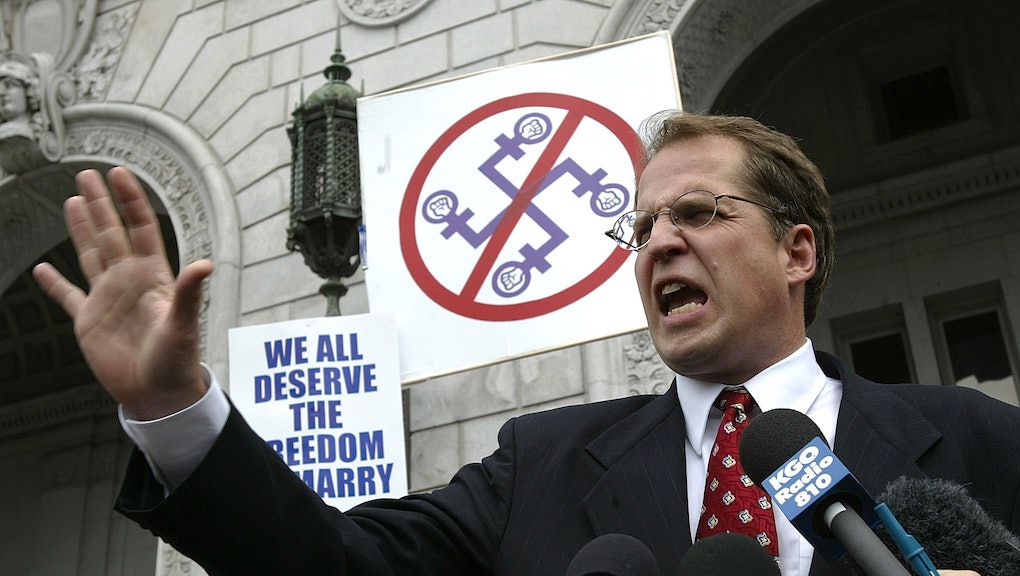 Are you ready for this? On Thursday, the Arizona State Legislature passed a bill that allows businesses to refuse service based on the owners' "sincerely held" religious beliefs. This means if you're Catholic and don't believe in same-sex marriage, you're legally allowed to turn away gays and lesbians. The proposal already made it through the House and Senate, and is now sitting on the desk of Republican Gov. Jan Brewer.

The year is 2014 — approximately six decades after the Civil Rights Era. But by the sound of it, this bill is the modern-day Jim Crow. And what's happening in Arizona is actually the result of a coordinated several-state push, backed by major local and national organizations.

Here's the quick backstory. Last year, the New Mexico Supreme Court allowed a gay couple to sue two photographers for refusing to photograph their union. While the shutterbugs argued they were protecting their religious rights, the court ruled they were violating New Mexico's Human Rights Act by discriminating against the couple.

"The Huguenins [photographers] today can no more turn away customers on the basis of their sexual orientation — photographing a same-sex marriage ceremony — than they could refuse to photograph African-Americans or Muslims," wrote Justice Richard Bosson in the court's unanimous decision. The photographers are now "compelled by law to compromise the very religious beliefs that inspire their lives," he added.

Who are these powerful right-wing organizations? Many are tax-exempt nonprofits, supported in part by all our tax dollars.

In Arizona, the Center for Arizona Policy, a social conservative group that promotes anti-abortion and conservative Christian legislation, is backing the proposal. On the national front, prominent organizations like the Knights of Columbus, the Family Research Council and Heritage Action for America are behind the efforts.

Let's take a deeper look. The Center for Arizona Policy is a tax-exempt, 501(c)(3) organization that is "committed to promoting and defending life, marriage, and family, and religious liberty." It's a $1.6 million-a-year operation with anonymous donors. The Family Research Council (FRC) is the heavy hitter at the national level. Also a tax-exempt 501(c)(3), it's a $14 million-a-year organization. The FRC's primary "exempt purpose is to reaffirm and promote nationally, and particularly in Washington D.C., the traditional family unit and Judeo-Christian value system."

According to the IRS, to be a 501(c)(3), the organization must be "organized and operated exclusively" to serve one of several exempt purposes, which includes the "advancement of religion."

While moderate conservatives have already retracted the anti-gay proposition in Idaho and Kansas, they face significant backlash from lobbyists including the Heritage Action, who've been "threatening incumbents with primary challenges if they don't support its agenda," according to US News & World Report.

What trumps what? Anti-discrimination laws or the First Amendment right to religious freedom? New Mexico sided with the former, but clearly, not every state agrees.  Brewer vetoed a similar proposal last year, but she's made no statement on her intentions this time around.

Stay tuned because if this bill becomes law, we soon may be privy to time travel, 60 years into the discriminatory past.