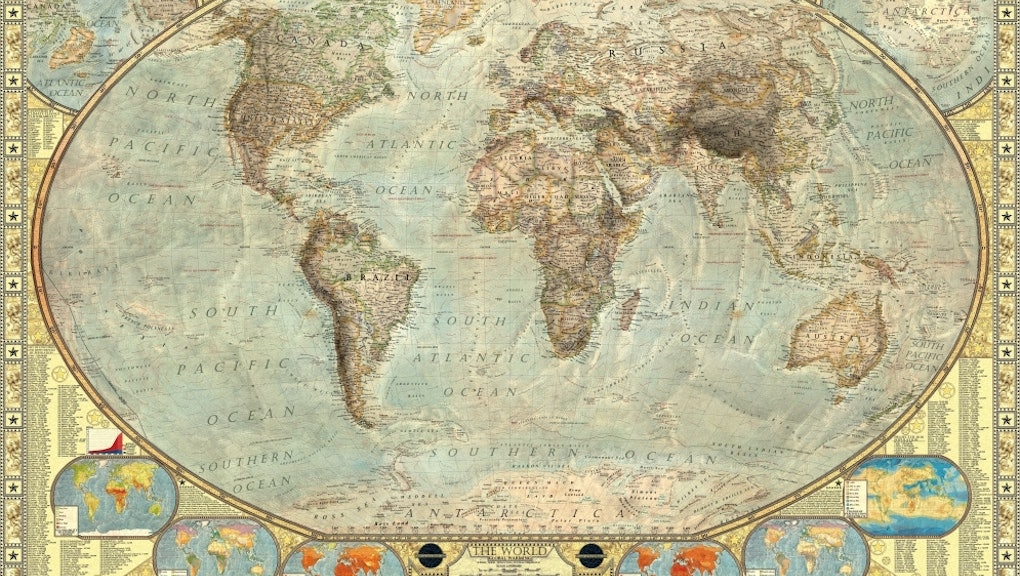 What the World Would Look Like if the Polar Ice Caps Melted — An Eye-Opening, Viral Map

One of our greatest challenges when combatting climate change — perhaps the most important issue of our time — is that it is hard to picture how catastrophic its effects will be. Unlike natural disasters such as hurricanes or earthquakes, climate change is a long-term process: There aren't any dramatic viral pictures to spread that would spur people into immediate action.

That's why predictive visual works like Martin Vargic's are so important. Vargic is an amateur graphic designer from Slovakia building a reputation for crafting beautifully detailed maps. Earlier this week, his extremely clever fictional map of the Internet went viral. The map below has a similar aesthetic: It is inspired by historical maps and traditional cartography, but focuses on the realities of the contemporary world. "The World - Climate Change" is a sobering depiction of a planet where the polar ice caps have melted, leading to a sea-level rise of 260 feet.

There are more than 5 million cubic miles of ice on Earth, and the last time the planet was free of ice was 34 million years ago. If we continue burning all our greenhouse gases, adding 5 trillion tons of carbon to the atmosphere, the average surface temperature could rise from 58 to 80 degrees Fahrenheit, putting our ice caps in danger.

While similar representations have been created before, many in the form of Google Earth's interactive maps, Vargic's feels particularly striking because of its old world design and intricate detail. While the interactives feel like a simulation — drag a slider and you can reverse the effects — there's a dreaded sense of inevitability in Vargic's map. You can't click a button and make the land come back. The antique styling makes it clear thatunless we take drastic action against climate change, this fate will be etched into our history.

Vargic hopes that the drama of his map will be a motivating force: "There is still a way to prevent all this from happening," Vargic wrote on DeviantArt. "If we limit our greenhouse gas emissions to bare minimum, we can still save our environment and our civilization from the worst."

Here is how our world will change if Earth's polar ice caps melt:

1. New York, Miami, New Orleans and other cities on the Atlantic, plus Florida and the Gulf Coast, would all be gone.

Over one-third of all Americans, an estimated 120 million, live on the East Coast. This area would be flooded by rising sea levels. The entire Florida penisula would be under water, and the Mississippi Delta would become an inlet. On the West Coast, San Fransisco would be in peril, and the Central Valley would be transformed into a giant bay.

2. The Amazon Rainforest would become the Amazon Sea.

Currently under great threat due to deforestation, the final nail in the coffin for the Amazon would be its conversion into a giant inlet for the Atlantic. La Plata Basin, where Buenos Aires is situated, would suffer a similar fate.

3. In Europe, Holland, Denmark, the Baltic, and most of Belgium and England would disappear.

In this catastrophic scenario, the low-lying capital cities of Northern Europe, including London, Amsterdam, Copenhagen, Stockholm and Helsinki, would disappear. In the south and east of the continent, the Mediterranean, Black, and Caspian Seas would grow.

While Africa would lose a smaller overall proportion of its land compared to other continents, the rising temperatures would be disastrous, making large parts of the continent uninhabitable.

5. One billion people in Asia would lose their land.

Asia would be the continent with the greatest number of people affected. Currently, 600 million Chinese inhabit land that would be flooded, as does all of Bangladesh's 160 million person population. Huge cities like Kolkata, Mumbai and Ho Chi Minh City would be in severe danger.

Australia is the driest inhabited continent on Earth, with 70% of its land classified as "arid" or "semi-arid." A dramatic sea level rise would create an inland sea, but at the cost of the fertile coastal land where most Australians live.

7. We'd finally be able to see the land mass that's been hiding beneath the Antarctic ice (or at least what's left of it).

The East Antarctic Ice Sheet contains four-fifths of all the ice on Earth, and would cause a significant change in sea level if it melted. The West Antarctic Ice Sheet is more vulnerable because it sits on top of bedrock that is below sea level. Since 1992, it has averaged a loss of 65 million tons of ice per year.