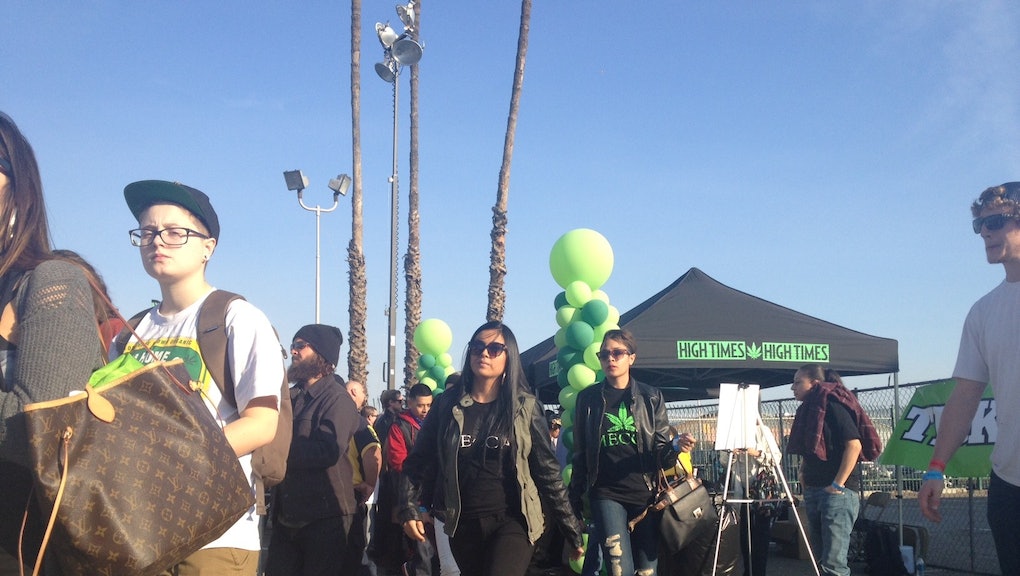 From China to Cannabis Cup: The Complete History of Marijuana, in 11 Photos

Marijuana legalization is a sexy topic these days and for good reason. The government wants to keep it out of our Swisher Sweets, even though most of us know it's less dangerous than other items on the market ... like alcohol.

What often gets forgotten in this debate is the long history of marijuana culture that paints a starkly different portrait of the drug than regulators want us to believe.

Read: Interactive map shows which states are cashing in on legalizing marijuana.

The hemp plant on which "marijuana" grows has been growing naturally since the dawn of time. And when you look back on how it's been used and the culture around it, legalizing marijuana today is a no-brainer.

For example, many of the first references to marijuana come from ancient China around 2900 B.C., when Emperor Fu Xi (or Fu Hsi) referenced "ma" — the Chinese word for cannabis — as a "popular medicine that possessed both ying and yang." These discoveries continued through Chinese history, causing marijuana to be referenced by other emperors and medicinal records as a plant with "healing" properties.

But these references aren't just restricted to China. Healing oils derived from cannabis were referenced in the Old Testament. (This is where the Rastafarian belief in smoking copious amounts of ganja originates.)

The ancient Egyptian, Indian, Arab, Greek and Roman cultures had medical records from 1200 B.C. through 1500 A.D. citing cannabis as a medicine to heal everything from glaucoma to STIs.

Fast forward to the settling of the new world when Jamestown settlers cultivated the plant in Virginia. It was an agricultural phenomenon that passed down to the Founding Fathers like George Washington and Thomas Jefferson.

And yet, sometime in the early 1900s, state governments began to outlaw cannabis. Even the League of Nations began to regulate it, calling for it to be used for scientific and medical purposes only. By 1936, the term "marijuana" had been popularized and demonized in the media. Films like Reefer Madness and the newly-created Federal Bureau of Narcotics began to take action.

The Marihuana Tax Act was established in 1937, and Samuel Caldwell in Colorado became the first American to be arrested and convicted for the illegal sale of marijuana. And while "grass" remained a big part of the counterculture revolution throughout the 1960s, by 1970 it became official with the Controlled Substances Act that marijuana had no acceptable medical use and was considered as dangerous as heroin.

This brings us to our current day. With California's Compassionate Use Act of 1996, states began to reform the laws pertaining to marijuana for medical purposes. Colorado followed suit in 2000 and since then, over 20 U.S. states and the District of Columbia have legalized the plant for medicinal uses. The movement is certainly growing faster than a marijuana plant itself.

Earlier this month, the High Times Medical Cannabis Cup, the marijuana industry's premier showcase of plants, cultivation methods and products for consumption, confirmed the marijuana culture is alive and as innovative as ever.

Nearly 10,000 people attended the event at the National Orange Show Events Center in San Bernardino, Calif. to see the full range of what the marijuana industry, becoming increasingly legal, has to offer. For growers, there were presentations by botanists striving to develop better seeds and strains. For consumers of marijuana, there were samples of edibles like cookies and brownies, as well as products for consumption like pipes, bongs and vaporizers.

There were even pieces of weed jubilantly thrown into the air at one point. And of course, there were also plenty of samples of "dabs" — highly condensed, THC-rich wax that could be consumed on site from giant bongs lit with blowtorches.

It was also hard not to notice the amount of tattoos, sunglasses and black T-shirts on the festival's attendees. As the culture continues to come out into the open, it still spent decades behind closed doors in the dark smoky rooms of the criminal market. It may take them some time to not look so rough around the edges.

Nonetheless, as the marijuana movement slowly but surely turns the tides on the legality of cannabis state by state, governments and people should be aware of the history behind this plant. Like any drug, marijuana can be used or abused and can cause good or harm. But since it's been part of human culture for nearly 5,000 years, it's definitely here to stay.