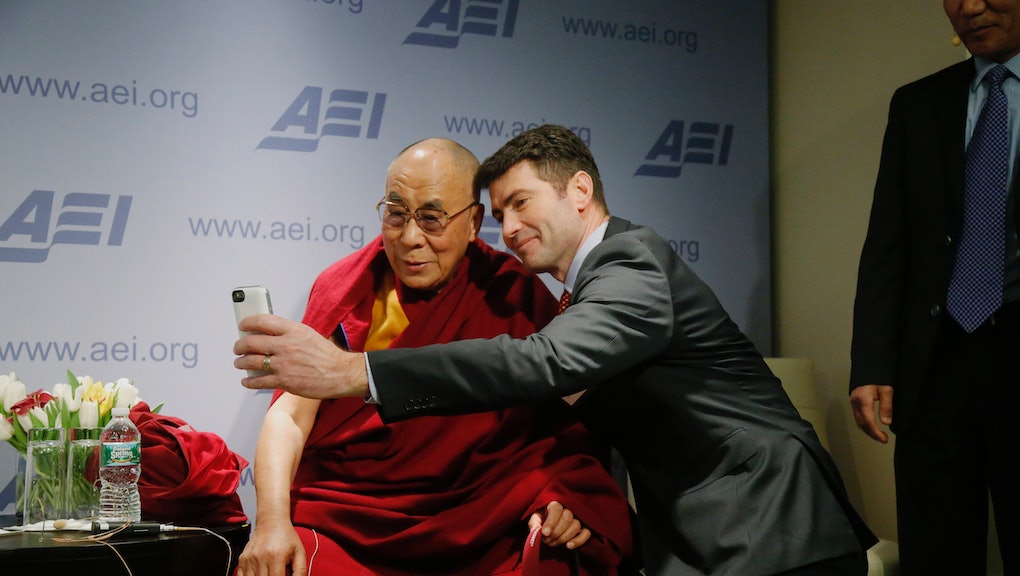 The Dalai Lama, Nobel Prize Winner and self-identified Marxist, appeared at the free market think-tank American Enterprise Institute Thursday. His Holiness was one of several unusual participants in a discussion on the role of markets in creating economic prosperity and happiness. He was joined by yoga practicing hedge fund manager Dan Loeb, Columbia University economics professor Glenn Hubbard and social psychologist Jonathon Haidt.

While the Dalai Lama is typically associated with leftist movements, many on the right have long admired his devotion to religious freedom and inspiration of anti-government protests. Now and then, he's made a few statements exalting the importance of individualism and capitalism that show his beliefs, and those of many free marketers, aren't so different after all.

1. "Change doesn't start in the government — it starts in the individual."

"Happy world? From where does it start? From government? No. From United Nations? No. From individual...So change or constructive work must start from the individual."

2. "A centralized economy, no matter how much effort, fails."

In discussing China's transition to a market economy in the 1980's, the Dalai Lama said, "A centralized economy, no matter how much effort, fails." He continued, "I think Deng Xiaoping was a very, very realistic leader. He accepted the reality and had courage to change the economic system."

In his visit to Scotland in 2012, the Dalai Lama said that he was happy to meet with officials but, "I think governments can't do much." Instead, he said, "Scotland belongs to Scottish people, not these (political) parties."

"China has to go along with world trends. That's democracy, liberty, individual freedom. China sooner or later has to go that way. It cannot go backward," His Holiness told the Houses of Parliament in London in 2012.

5. "I developed more respect for capitalism."

"After listening [to the lectures yesterday and today], I developed more respect for capitalism." He said that he no longer views capitalism as a system in which, "you only take the money, then exploitation."

Maybe our differences aren't so big after all.