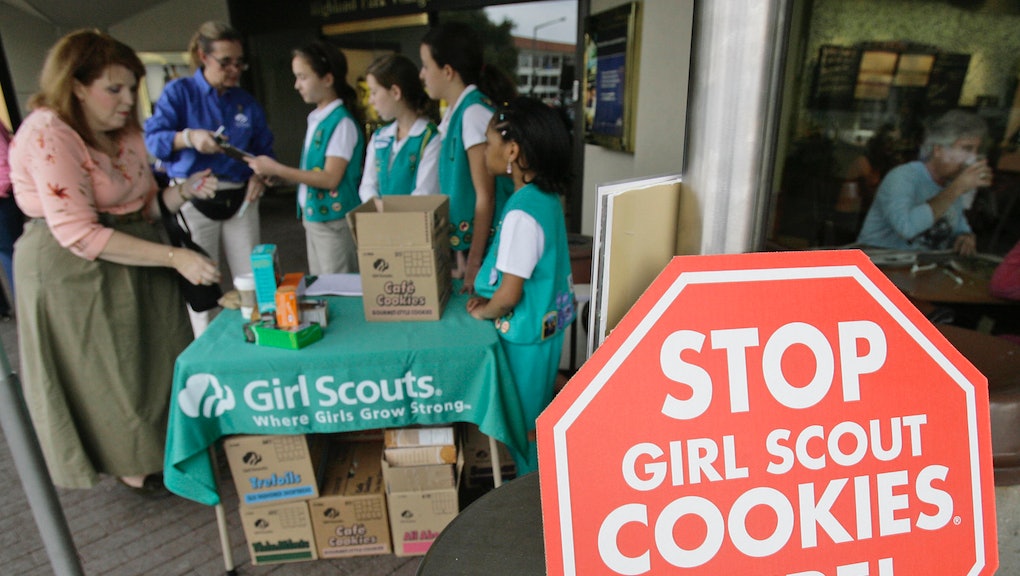 Anti-Abortion Advocates Want You to Reject Girl Scout Cookies, But the Girl Scouts Have a Plan

Pro-life groups are adding another organization to their boycott list: the Girl Scouts of the USA (GSUSA).

Yes, you read that right. This year, a group of anti-abortion activists are attempting to launch a national boycott of the Girls Scouts and their delicious annual cookie fundraiser because, they claim, scouting leadership is too friendly to pro-abortion leaders and causes.

The boycott — called Cookiecott 2014 — is being pushed primarily by Pro-Life Waco, which is joined in its anti-cookie quest by Catholic Family and Human Rights Institute, and the pro-life site Lifenews.com.

The brouhaha apparently started when GSUSA, which has a strong social media presence, retweeted a Huffington Post link to a live discussion on their site about who should be on the list of 2013 Women of the Year. What might seem like a harmless support of gender equality was apparently interpreted as a gesture of support for abortion.

Why? Wendy Davis was one of the women mentioned as a candidate for Women of the Year. Davis has worked hard to grant women the right of choice by voting numerous times against anti-abortion bills, and most famously, for holding an 11-hour long filibuster to block a measure that included more restrictive abortion regulations for Texas.

A non-political organization, the Girl Scouts have been vocal pro-women advocates for years. That is precisely what they were trying to do with the HuffPost link, according to the Girl Scouts spokeswoman Kelly Parisis, who accused Pro-Life Waco and the other boycott organizers of attempting to further a political agenda "on the backs of our girls."

The Girl Scouts maintain that all proceeds of the cookie sales remain within the community where the cookies are sold. Moreover, some Girl Scouts have attempted to turn the tables on the spoil-sport boycotters, like scouts in Louisiana who are sending out special fliers this year to boost sales.

Ultimately, and as they have done in the past, the nonprofit hopes to use the attention to send a positive message. Plus, all that publicity might actually turn out to be good for business.

"More people talking about Girl Scout cookies make them more top of mind and remind people to buy," said Jonah Berger, an associate professor of marketing at the Wharton School. "In the end everyone wins."