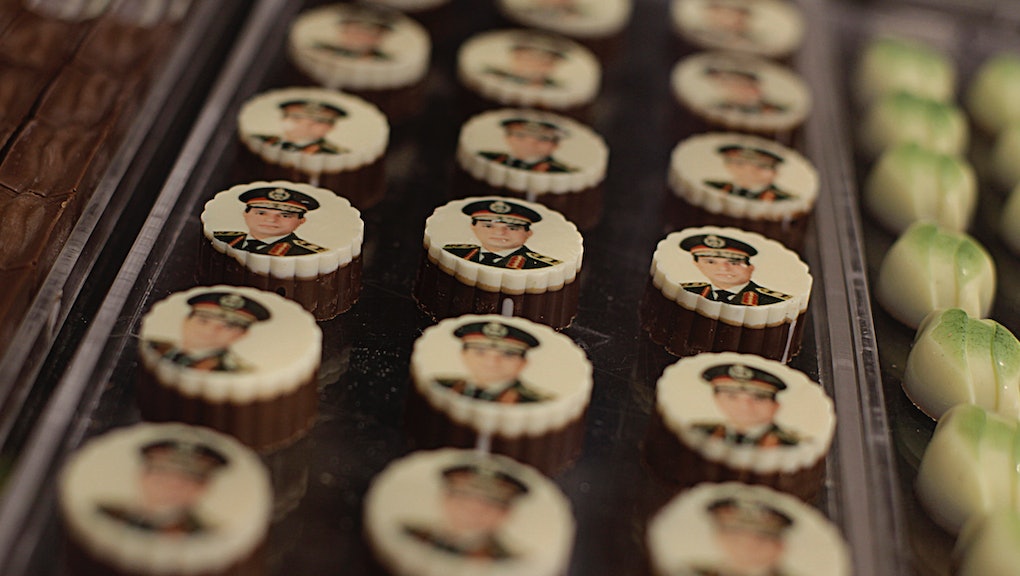 How much do you love Field Marshal Abdel Fattah El-Sisi? Don't answer that — take it instead as a pitch for a gameshow on Egyptian TV, or a vow soon to be officially incorporated into the Egyptian marriage ceremony, or maybe as a hieroglyph waiting to be unearthed inside a Giza pyramid. Almost anything seems plausible right now regarding the popularity of El-Sisi, who was made commander in chief of Egypt's armed forces in August 2012, and who has since led the ouster of then-President Mohamed Morsi.

Even the anecdotes of how "everywhere" he is are everywhere. You've probably read about how his face appears on chocolates for sale in a posh café in central Cairo; on the posters adorning every lamp post on the 6th of October Bridge, one of the Nile's busiest thoroughfares; on the photoshopped Egyptian money for sale as souvenirs Downtown. It's quite normal to see a poster of him in the local barbershop, veterinarian, or corner shop. "Teslam El-Ayady," a pop song expressing love for the army of which he is supreme commander, blares nightly from passing scooters.

There is clearly no direct coercion in this mass expression of love for El-Sisi and his army. His gentle speaking manner, his popularity with the ladies, and performance of reticence toward the question of a presidential run, all strike a flirtatious note, as though he is the shy suitor of an ardently loving country. If he were to run for president today — and there is a wildly popular Facebook group dedicated to this wish — there is little doubt that he would win.

The day I finalize this article happens to be six months to the day of the army-led massacre of Brotherhood counter-protesters at Rabaa in Cairo. And no matter how many women swoon, the army has returned to its practice of state-approved sexual assault (virginity tests) of female protesters, which El-Sisi has defended on the record. Military trials for civilians, which activists have sought to eradicate as a key revolutionary demand, have greatly increased since Morsi's ouster.

Given that he was almost unknown to the public 18 months ago, El-Sisi's rise has been meteoric. In 2012, as the youngest member of Egypt's Supreme Council of Armed Forces, El-Sisi was promoted to commander in chief of the army by then-president Morsi. At the time, this move was largely viewed as a strategic way for Morsi to drive a political wedge into Egypt's sprawling and deeply powerful military institution. El-Sisi was seen as a good figure to bridge the government and the military — young, softly-spoken and not obviously entrenched in the pre-2011 Mubarak regime. At this point Morsi can hardly have dreamed that El-Sisi would not only depose him, but would even be poised to take his place less than a year later.

Image Credit: Mia Jankowicz. El-Sisi is fiercely popular in the Khan El-Khalili market streets where he grew up, in Cairo.

The protests on June 30, 2013 against Morsi attested to a leadership that had been exclusionary and democratically dubious. But on a more immediate political level, it had been plain inept: Almost nothing had changed in the desperate economic reality of Egyptians. The Muslim Brotherhood seemed more concerned with banning pornography than with vital policy reform. It was during a desperate gas and electricity shortage that things came to a head in the summer heat. The famous figure of 30 million people in the streets is almost certainly a fabrication, but you can be sure that the political popularity of the brotherhood was well-worn out by this time. Whether El-Sisi responded to popular will (i.e., a continuation of the revolution); or whether the people's will was used in an army power grab (i.e., a coup), is the question that has dogged commentators ever since.

While El-Sisi's face is everywhere, it is nonetheless extremely difficult to judge the full depth of this love on the basis of pop culture "Sisimania." As everywhere, Egypt's pop culture has a propensity for faddishness. In this tough economy, small-scale entrepreneurs will pick up on anything popular and plaster it all over cheap trinkets. Six months ago, I bought a little pack of fake Egyptian pounds with Spongebob Squarepants photocopied onto them, yet nobody's calling for his leadership (wait, that's an amazing idea). Furthermore, prior to 2011, it was common practice to curry favour with a politician by having his poster adorn your place of work. So these gestures of popular approval, while being meaningful, are not in themselves culturally groundbreaking. It remains that while the political entity of the Muslim Brotherhood is crushed for now, around 20-30% of the Egyptian population identify as brotherhood, even if not all were ever politically active.

If there is significant objection to El-Sisi and what he represents, whether brotherhood or otherwise, there is barely any space to express it. Neoliberal and secular power bases and the media have centralized on the idea of El-Sisi. Important changes to protest law has made the work of activists almost impossible, resulting in numerous politically-motivated arrests.

Lina Attalah, editor in chief of the independent news organization Mada Masr said, "Right now, there's no political space. We [Mada Masr] couldn't even bring ourselves to analyse the writing process of the Constitution — which is normally the perfect material for analysis — because there's no politics in there … Instead it's a very infantile process of wiping out things that the Brotherhood had written a few months ago." Such an atmosphere, hardly discouraged by the current government, leaves little space for other political operators and potential presidential candidates.

The Muslim Brotherhood has been outlawed, brutalized and defined as a terrorist organization. Meanwhile, any viable civilian and secular leaders, like Nasserist leftist Hamdeen Sabbahi, or Nobel prize-winner Mohamed El Baradei don't really stand a chance. Liberal business man Naguib Sawiris has put his approval behind an El-Sisi run.

So while there's no doubt that El-Sisi is popular, the question is now this: What sort of political reality does it signify? Under his magic presence, the government has passed laws such as the recent clampdown on protest (strongly questioned by human rights organizations) that were never possible under previous governments. How does El-Sisi's presence create such widespread approval?

The army is one of the few relatively meritocratic institutions in a country where advancement has long been reserved for those with connections. Furthermore, beginning with President Gamal Abdel Nasser, the army's relationship to "stability" is now deep-seeded in people's minds, and El-Sisi has consciously nurtured an association with him in numerous gestures, such as giving a heartfelt speech at Nasser's burial site. Nasser remains historically popular due to his political vision and his distinct economic and industrial programmes. However, the actuality of what El-Sisi promises seems largely talismanic. Mahmoud Darwish, a taxi driver and accountant who has lived in Cairo all his life, shrugged when I asked his opinion on El-Sisi. "The people love him, he is everywhere — on the TV, in the streets, everywhere. But nobody actually knows him. And what does Darwish want? "Me? I don't know. El-Sisi is a strong man. I just want stability."

Image Credit: AP. Egyptians waving a large photo of El-Sisi during a rally on January 25, 2014.

But the army has not seen significant combat since the 1970s. In actuality, it resonates less on a truly military level and more as a paternal body to which one can always turn in times of trouble. As El-Sisi said in a recent speech, "The will of the Egyptian people is free. They can choose whoever they want to rule them — and we [the army] are the guardians of this will." Seen in this light, the option of military intervention in exceptionally disastrous times is profoundly reassuring to a worried public. In this perception, the army is the father you can always run to, to fix the 'broken' democracy, their intervention as an exceptional guiding hand rather than as an institution that can ignore democracy and preserve their privileges in the process.

For the Egyptian army took a major shift in the mid-1970s: With no particular military role, they moved into business and industry. Essentially, they make a great deal of Egypt's products, from pasta to ceramic tiles, using factories, labour and land provided gratis or at preferential rates by the state. This shifting of roles over the years, as well as the general neoliberalizing of the economy under Mubarak's corrupt processes, has contributed strongly to the weakening of the political state and naturalized the presence of a military body in the country's leadership (while making numerous fortunes for those who reach the top). And now, after the disappointments of post-2011 political processes, the Supreme Council of Armed Forces (SCAF) has been able to cement its image as sole protector and provider for the country. And the popular voice is calling for such a protector more than ever before. El-Sisi, like this modern army, has never seen combat. Nonetheless, using unprecedented charisma and an emotional hold on the people, he is the embodiment of its interests and power.

With thanks to Jasmina Metwaly and Lina Attalah.