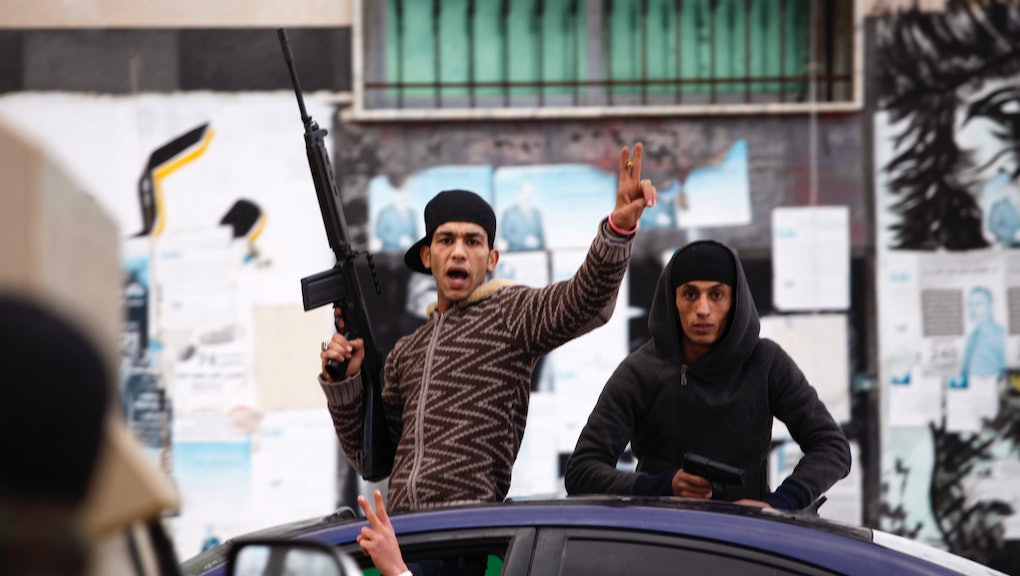 After Decades With Almost No Guns, Almost Every Libyan Household Has One

In a country where civilian gun ownership was rare for decades, a sudden inundation of small arms means plenty of people will likely get shot.

Ahmed, with an imposing physique, was able to use his strength to avoid what could have easily become a catastrophe — a catastrophe all too common in today's Libya.

(Bashir asked that I not use the brothers' surname to prevent a potential intercity conflict, as the name betrays the family's Libyan hometown, which is not Tripoli.)

This past week Libyans celebrated the third anniversary of their uprising against Muammar Qaddafi, their country's leader for over four decades. With looming political questions like the creation of a constitution and the reigning in of militias, Libya faces another challenge: the prevalence of firearms within population. There are several hundred thousand small arms in Libyan homes.

It is widely believed that every Libyan home has a weapon. Photo credit: Christopher Reeve

During Libya's eight-month long conflict, state weapons stockpiles were raided. Countries like France and Qatar sent arms to support the insurgency. Fighters on both sides of the conflict found themselves with everything from pistols to MANPADS, missiles that rest on one's shoulder and can take down a commercial jetliner. While many of these weapons crossed borders to neighboring states, many remain in Libya.

With the government still unable to guarantee security to Libyans, Libyan families are known to have at least one gun. Crimes like robberies, kidnappings and carjackings have become part of daily life. The looming threat of widespread political violence, Bashir says, is another incentive to keep a gun.

Ahmed keeps an AK-47 and a G3 in his home for safety. "I have these guns, but would give them away if we had a good government to provide security," he says. "I don't want something that can kill a person."

This, of course, is the challenge: ensuring guns kept for safety do not maim or kill people.

The effort to meet this challenge in Libya has been spearheaded by an organization called Handicap International (HI). HI, supports persons with disabilities in challenging settings. It began its work in Libya with a focus on clearing mines and raising awareness about explosive remnants of war. Over time, HI's Libya staff found that guns were the greatest threat to civilian well-being.

A 2012 HI report states that in October and November 2011, at the end of the civil war, 400 people were killed in Tripoli as a result of gun accidents. HI's shift to a focus on guns is supported by further data. In the first half of 2012, over 1,100 Libyans were treated for gun-related injuries in Tripoli, as opposed to 213 injuries from mines and other explosives in all of Libya.

From children finding guns and accidentally firing them, to arguments getting out of hand, to bullets falling after celebratory gunfire, Libyans were simply unprepared for the inundation of small arms that they suddenly faced.

The Libyan government put together a few events to encourage people to give up their weapons. But considering the lack of security, most Libyans are in no great rush to turn in their arms. The government recently passed a gun license law to be enforced starting in March.

HI focuses on risk awareness. The organization has worked with Libya's Ministry of Education and 30 local organizations like the Boy Scouts to educate Libyans about the threat of small arms.

Reaching out to young Libyans has been key. And the most effective way of doing this, says Cat Smith, HI's head of mission for Libya, is through Libyan schools. "The key to success is through teachers."

HI trains master teachers who train other teachers who teach their students who then take safety messages home to their families. The rest of the campaign is supplementary: TV and radio spots, billboards, flyers, and t-shirts that announce, "I am Libyan. I am against weapons."

Children getting their hands on guns make for a particularly dangerous scenario.

Frederic Maio, Desk Officer for HI's Libya program, explains the lure of guns for children: "Young members of the militias are seen as heroes. They are looked up to as role models. They all smoke cigarettes and have Kalashnikovs [AK-47s] around their necks."

One of HI's television spots, no longer airing, shows an unsupervised child finding a gun on a nightstand. Seconds later, a gunshot rings out.

The spot then shows how the tragedy could have been prevented; the child's father unloads the weapon, removes the magazine, and stores the gun.

According to data collected the second half of 2012 from Tripoli's two major hospitals, nearly 30% of Libyans seeking treatment for gun-related injuries were victims of crime, a category HI's awareness campaign can't address.

On the bright side, the Tripoli data show a 39% decrease in the number of gun violence victims between the first and second halves of 2012. It is difficult to determine factors that have contributed to the decrease. HI's Tripoli data doesn't go beyond 2012 because the organization, due to lack of funding, shut its operations in Libya's capital in April 2013. The group continues to work in Misrata and Sirte. Thus far, over 110,000 Libyans, mostly children, have learned about the dangers of guns through the work of HI and its local partners.

In Libya, the sound of gunfire has become part of the country's audio landscape. Smith says that Libyans repeatedly express their willingness to give up their guns. But as long as Libyans feel insecure, without an official security agency to guarantee protection, they won't be doing that anytime soon.