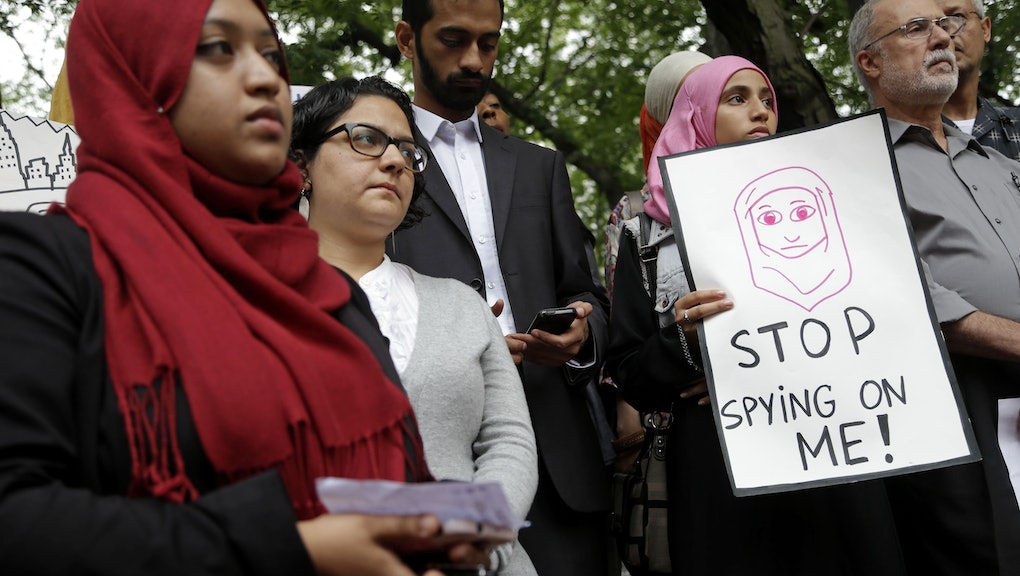 In a disturbing ruling Thursday, a federal judge said that it is constitutionally sound to treat Muslim mosques, businesses and student associations as terrorist organizations. This means police departments are free to secretly monitor their communications, store members and employees' personal information in police files and infiltrate get-togethers with undercover informants.

The case was spurred by revelations that for years, the NYPD was doing exactly this to dozens of Muslim organizations across the Northeast, including mosques in New Jersey as well as student groups and faculty members at at least 17 university campuses. In an attempt to catch potential terrorists post-9/11, the department monitored student groups' discussion forums as part of a "daily routine." It designated entire mosques as potential terrorist cells in the absence of any evidence of criminal wrongdoing. It sent officers to investigate religious meetings, and even sent an undercover agent on a university whitewater rafting trip to track how often the students prayed.

In a particularly ridiculous scenario, several officers rented out an apartment by the Rutgers University-New Brunswick campus to conduct terrorist-monitoring operations. They called it their "safe house." It was busted when their landlord stumbled in and mistook it for an actual terrorist cell.

Once the Associated Press revealed what the NYPD was doing, the department doubled down, claiming their efforts were part of justified terrorist prevention measures. After all, as NYPD spokesman Paul Brown argued, 12 people who have been charged or convicted of terrorism in the U.S. or abroad were at one point linked to a Muslim student association.

But the NYPD has never criminally charged an Islamic organization with operating as a terrorist enterprise. There is no indication that any of the targeted students have been charged with criminal activity.

"While this surveillance program may have had adverse effects upon the Muslim community after the Associated Press published its articles," the judge wrote. "The motive for the program was not solely to discriminate against Muslims, but rather to find Muslim terrorists hiding among ordinary, law-abiding Muslims."

The Center for Constitutional Rights said that this practice is comparable to interning Japanese-Americans during World War II, which was also initially ruled constitutionally sound.

The plaintiffs plan to appeal. Hopefully, with enough momentum, this type of practice can get the same ruling as stop-and-frisk.