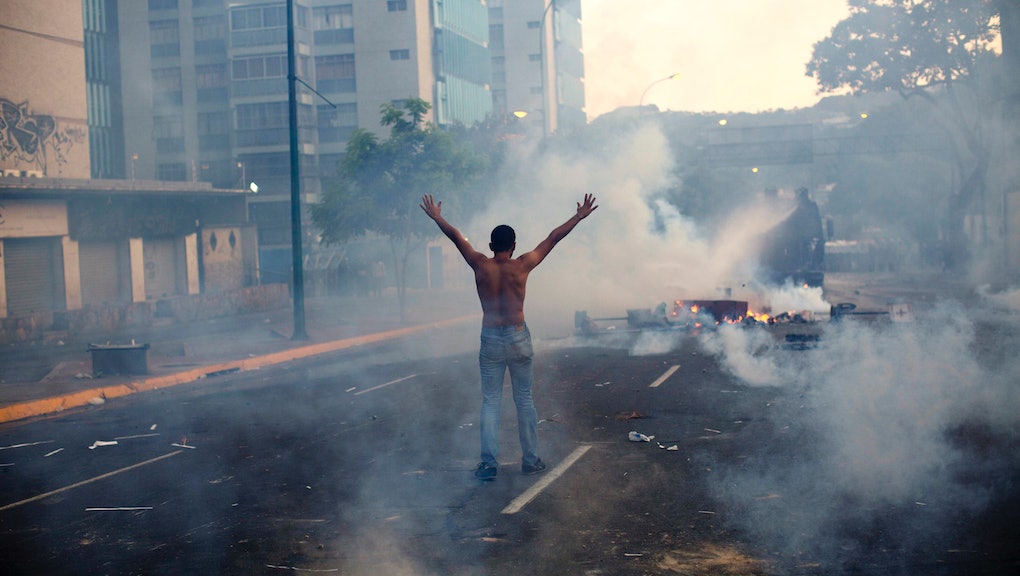 The Protest the International Media Isn't Talking About

Nationwide student protests against Venezuelan President Nicolas Maduro (successor to late President Hugo Chavez) began earlier this month and picked up steam on Feb. 12, when security forces killed three protesters. Now, the situation is in crisis. Opposition leader Leopoldo Lopez has been detained on murder and terrorism charges for organizing protest (since downgraded to arson and conspiracy), while Maduro has moved to eject U.S. diplomats in a blatant attempt to distract from brewing dissent.

[Maduro] has been running the country into the ground. Since taking over for the deceased Hugo Chávez in April 2013, Maduro has led Venezuela to a 56% inflation rate and a 50% increase in the budget deficit, prompting China to cut back on its $20 billion loan, and Moody's and Standard & Poor to downgrade Venezuelan bonds to "junk" status. Additionally, the once-strong dollar has dropped from an 8 to 1 exchange rate relative to the U.S. dollar at Chávez's death, to a disastrous 87 to 1. In response, Maduro has taken to blaming U.S.-backed "fascists" and the "parasitic bourgeoisie." He has also called for more state intervention. This has only made things harder for the private sector, which has since made it nearly impossible for Venezuelans to get food and other basic material necessities.

As Andreina Nash notes in the video below, Venezuela is in a sorry state. There are over 25,000 murders a year, and 90% of them go unpunished.

Images filtering out of the country show a brewing disaster.

Meanwhile, the government has decided to deploy the military against protesters. Motorcycle-riding gangs known as colectivos have been reported riding at high speeds throughout neighborhoods, shooting randomly.

Throughout last night [of Feb. 19], panicked people told their stories of state-sponsored paramilitaries on motorcycles roaming middle class neighborhoods, shooting at people and storming into apartment buildings, shooting at anyone who seemed like he might be protesting.

As he notes, the New York Times World section had nothing on Venezuela, while the BBC, the Guardian, and and CNN barely covered the protests at all. Al Jazeera English didn't have any frontpage mentions of the crisis, while even Fox News missed out on a chance to criticize Maduro's government.

Toro says, "the level of disengagement on display is deeply shocking ... Venezuela's domestic media blackout is joined by a parallel international blackout, one born not of censorship but of disinterest and inertia."

"Let me put this clearly. Y'all need to step it up."