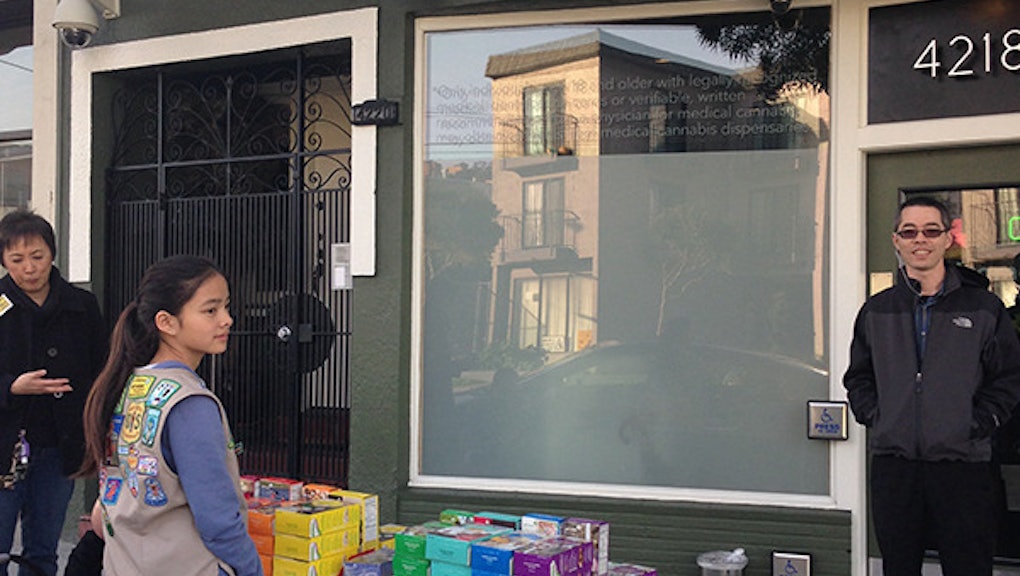 Staff member Holli Bert told Mashable that yes, munchies have a lot to do with it:

"It's no secret that cannabis is a powerful appetite stimulant, so we knew this would be a very beneficial endeavor for the girls. It's all about location, and what better place to sell Girl Scout cookies than outside a medical cannabis collective?"

Lei's mother, Carol, says that the opportunity helped her both have a discussion with her kids and raise money. By selling cookies outside the dispensary, "You put it in terms that they may understand," Carol said. "I'm not condoning it, I'm not saying go out in the streets and take marijuana [...] It also adds a little bit of cool factor. I can be a cool parent for a little bit."

Other girls in Lei's Troupe 3168 haven't sold outside similar clinics, but the Girl Scouts of Northern California are pretty chill about it. Director of Marketing and Communications Dana Allen said, "Girls are selling cookies, and they and their parents pick out places where they can make good sales. The mom decided this was a place she was comfortable with her daughter being at ... We're not telling people where they can and can't go if it's a legitimate business."

The Girl Scouts of Colorado just aren't as tolerant, though: