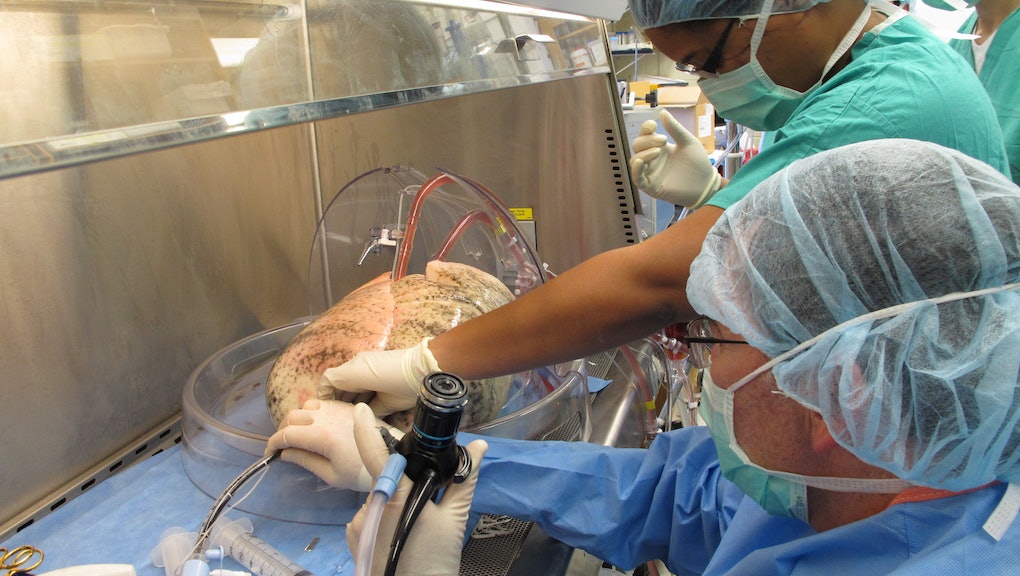 A Human Lung Was Just Grown in a Lab. Regenerative Medicine Will Never Be the Same.

Scientists have grown human lungs in a laboratory setting for the first time, in a major breakthrough for medical technology. While custom-grown organs won't be available to patients for decades, it's still, well, a lung. Grown in a lab.

Watch this medical miracle/horror below:

"It's so darn cool," University of Texas researcher Joan Nichols told CNN. "It's been science fiction and we're moving into science fact."

"Whole-organ engineering is going to work as a solution to the organ donor shortage," added Deputy Director Dr. Stephen Badylak of the University of Pittsburgh's McGowan Institute for Regenerative Medicine.

Assembled in Galveston, Texas, researchers started with lungs from two separate children who had been killed in traumatic accidents. While the lungs were too far gone to be used for a transplant, they were nonetheless valuable for experimentation. Scientists removed almost everything from one lung except a scaffolding of collagen and elastin. Then they took cells from the other lung and immersed it in a nutritive liquid "resembling Kool-Aid." After four weeks, a lung was born.

The experiment was replicated successfully using lungs from two other children. The lab-created lungs look much like the real thing, except "pinker, softer, and less dense." About 1,600 Americans are currently awaiting lung transplants. But the new laboratory-grown ones won't even enter human trials for at least a decade.

In November, a Spanish team was able to grow human skin. And in 2012, doctors grew a new ear on a woman's arm. The pace of such developments is expected to increase rapidly in the coming decades.

While this advance is incredibly important, and a massive step forward for both medicine and human regenerative potential, it's also a little creepy. Just look at it sitting there, presumably pulsing ... breathing ... waiting.