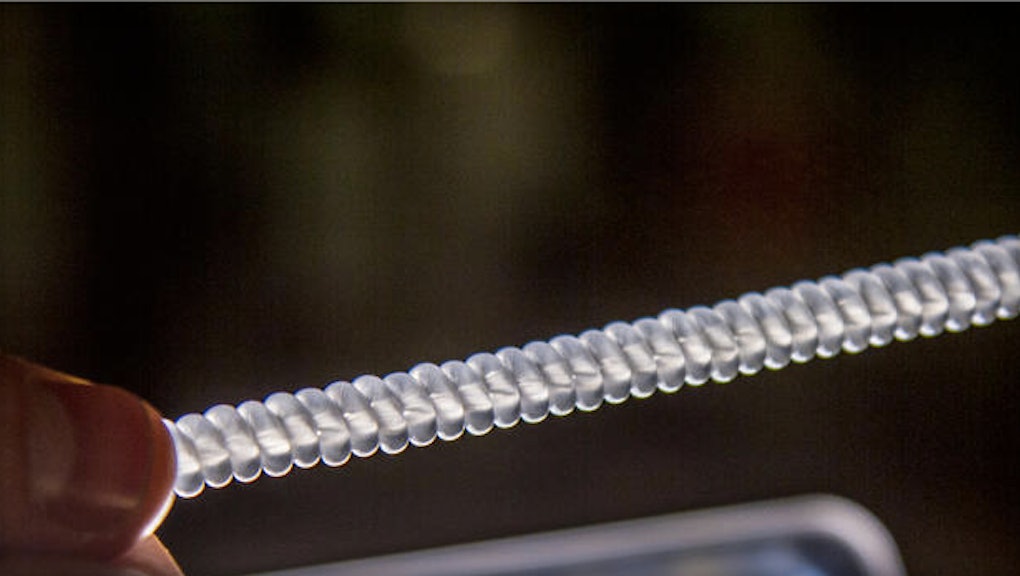 Check this out — a team of materials scientists at the University of Texas at Dallas have just discovered a way to create powerful artificial muscles using nothing but low-cost everyday fibers, such as fishing lines.

According to Popular Mechanics, the fishing-line-derived muscles can lift 100x more than traditional, meat-bound muscles, and form "a sinewy band that's flexible, dynamic, and can be reused millions of times." It's all done by twisting the materials into springy, high-energy coils.

While natural muscles contract just 20%, the new artificial ones contract up to 50% of their normal length. With further development, they could be used for any task that requires "superhuman strength," or wearable exoskeletons for patients paralyzed below the waist.

See the basics below:

"These muscles are something Popular Mechanics readers could easily make in their living rooms," said materials scientist Ray Baughman. "The coiling process is actually quite trivial. We're getting high school students to do it — you just have to pay attention to how much tension and weight you apply to the thread you're twisting. I'm not sure why no one else has ever discovered this before."

Once fishing line is repeatedly twisted to the point where it can no longer twist, it forms very high-tension coils; the researchers then took those coils and temperature-treated them so that they were locked in place. Heating the coil makes it expand and try to untwist, but all this ends up doing is causing the thing to compress. Baughman compares it to a "Chinese finger-trap."

Since their design is so incredibly simple, the new synthetic muscles are a huge breakthrough. The muscles are more energy-dense than commercial electric motors or even jet engines, according to nano-engineer Junqiao Wu. But even more astonishing is that they're exponentially cheaper than high-tech solutions like "shape-memory alloy or carbon nanotube yarn."