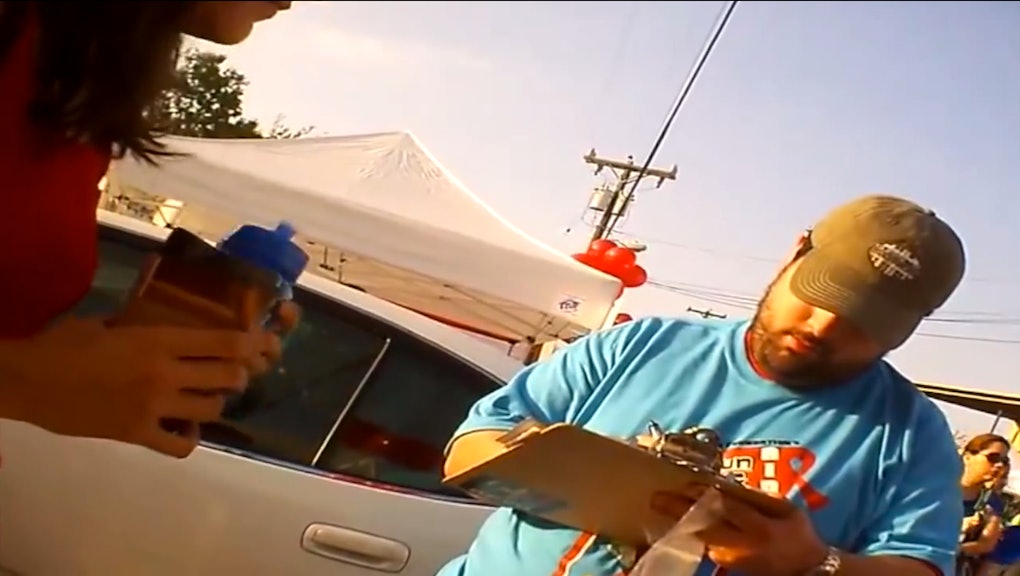 Democrats Want to Get Wendy Davis Elected So Badly, They're Breaking the Law to Do It

Right now, there's a battle going on to turn the Lone Star state blue. Democrats are doing everything they can, including breaking election law, to get it done. If the GOP doesn't wise up, it risks losing it.

Ridiculous, you say? Not in the mecca of Christian conservatism! Not in Cruz country! Since when has that ever stopped the Democratic Party from aggressively poaching enemy territory? I kid you not, I've heard it from the mouth of former White House Senior Advisor and Obama campaign manager David Plouffe himself at the University of Chicago: The Democrats want Texas and they want its 38 Electoral College votes bad — and they're convinced that they have a realistic chance of winning it. If they can add the Lone Star state to its win column on a regular basis ... game over for the GOP.

In fact, their efforts are already underway. Like any battleground state, the Democrats first looked at the demographic makeup of Texas. Today, Latinos make up 38% of Texas' population, while non-Hispanic whites make up 44.5%. The white electorate's dominance, however, will not last — because the Latino population's birth rates are higher, the Latino population is also still growing through immigration, and is younger (with a large population not yet at voting age). If legal Latino immigration rates stay consistent with 2000-2010 levels, Texas could be a majority Latino state by 2036.

Both parties know that Latinos are not a monolithic group, and that they are not all Democrats. But nationally, they lean Democratic (67% in 2008, 71% in 2012), and in Texas, Democrats hold only a little less sway (63% in 2008). That's because Republicans in Texas — including Governors Rick Perry and George W. Bush — have maintained strong and consistent presences within the Latino communities and have actively reached out to them more than Republicans in any other state. Indeed, when Bush was running for president, his campaign dispatched bilingual organizers in every battleground state to expand the Texas-Latino model outward.

But the Democrats see a lot of opportunities among the Latino community nationwide to boost its voter turnout way up from its 48% rate in 2012 (by contrast, the black voter turnout rate was 66% and white voter turnout rate was 64% in 2012). As illustrated many times before, Latino voting sentiments go way beyond immigration policy. According to Pew Research, 75% of Latinos say they prefer a big government which provides more services to a small one providing fewer services. By contrast, just 41% of the public-at-large voice support for more government.

Despite Obamacare's high unpopularity across the country (including among a majority of millennials — a key demographic needed for its implementation to be a success), a healthy majority of Latinos still support the health care law (61% according to Pew), predominantly because Latinos think that they can now access health insurance more easily because of it (Latinos have the highest uninsured rates of any racial or ethnic group within the U.S., according to the Office of Minority Health).

Latinos aren't the only demographic Democrats want to aggressively register more voters to win Texas with, they also want to go after women — particularly single women and especially single mothers. More than 40% of child births now occur among single mothers annually, according to the federal Centers for Disease Control and Prevention. Single women broke Democrat by a 2 to 1 margin in 2012.

And it is women in particular that Democrats are hoping to attract with their first martyr in the effort to turn Texas blue, gubernatorial candidate Wendy Davis. She's the perfect story they were looking for: a single working mother "fighting for women's rights" with her filibuster against abortion restrictions — even though it was later revealed that there were considerable embellishments made in her story.

Bird is at the cutting edge of the technological strategies that helped Democrats so effectively defeat Republicans in 2008 and 2012. The Wall Street Journal described his approach as "one part data and one part emotional connection. He keeps close track of which states are making their targets each day, but also preaches the value of relationships — between the campaign and its volunteers, and between volunteers and voters."

Not only that, his data-proven successes make it highly likely that left-leaning donors will give him the budget he wants as well. Politico reports that "two sources said the contemplated budget would run into the tens of millions of dollars over several years." And those donors, of course, won't just hail from Texas: Funds will come "from outside Texas as well," Bird said. "I think what you'll see is people in New York and California and other places realizing that this is a local fight with national implications as well."

But it seems that Bird and his Battleground Texas outfit have been caught exploiting legally protected information to turn voters out in an apparent violation of state law. James O'Keefe has released a new undercover video showing Battleground Texas volunteers admitting the group uses phone numbers from voter registration forms in later efforts to boost voter turnout. Texas Election Code prohibits the use of, or even the copying of, phone numbers provided by individuals registering to vote.

In any case, Republicans better be on the lookout. In terms of Electoral College battleground territory, they're on the defense and Democrats are going for the kill in the last major state the GOP has left. There's no reason why Republicans can't be employing these same analytical tactics and data-mining to be combing through red districts in battleground states and regaining some ground. But the ideologues of the right need to get over the myth that ideology and informing the public alone will achieve the electoral results they want. The Democrats figured out a long time ago that you have to take each state on a case-by-case basis, tailor the message (and the messengers) to attract the specific demographics and communities of that state and work on out-hustling the other side's ground game when it comes to voter registration.

The longer it takes the GOP to wise up to these new GOTV strategies, the quicker they could lose the last major electoral stronghold they have left.