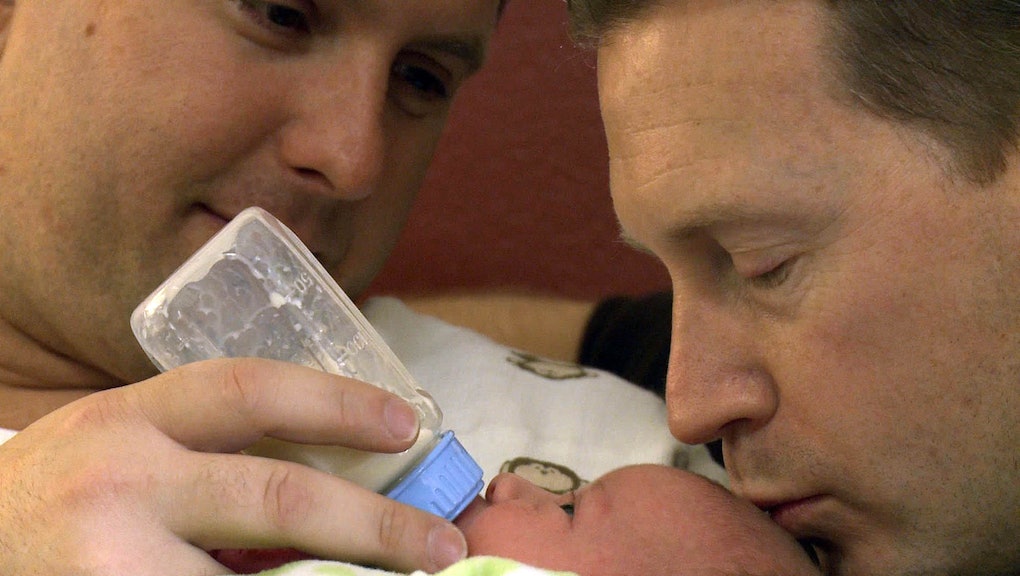 The news: On Tuesday, a federal court in Detroit will begin hearing testimony in a court case on Michigan's constitutional ban on same-sex marriage in which experts will be presenting studies and evidence that claim having parents of the same sex is bad for children. The trial will be the first of its kind in years, offering an unusual public examination of sociology, politics and the social science of family structure and child progress.

The trial involves a challenge of Michigan's ban on same-sex marriage by a lesbian couple who wants to marry and legally adopt each other's children.

Scholars testifying in the case are hoping to discuss the findings of their studies — most of which are highly controversial and hotly disputed — to argue that the children of same-sex couples are worse off than those raised by heterosexual married couples.

One of the most prominent of these scholars is Dr. Mark Regnerus, a sociologist at the University of Texas, who published a 2012 study that quickly became touted and cited by conservatives as groundbreaking science but condemned by leading social scientists as misleading and irrelevant. In most similar cases, a judge will simply read such evidence in a written brief, but Judge Bernard A. Friedman of Federal District Court in Detroit decided a trial was necessary to determine the legitimacy of the evidence. Several other sociologists are expected to testify against same-sex marriage with similarly contested studies.

"The overwhelming evidence so far is that there’s not much difference between children raised by heterosexual or same-sex parents," said Andrew J. Cherlin, a prominent sociologist of family issues at Johns Hopkins University. Numerous longtime scholars in the field have called Regnerus and co.'s studies fatally flawed and argue that when other factors like income and stability are held equal, children of same-sex couples fare just as well as those of heterosexual couples.

The background: Opponents of same-sex marriage have been trying for years to supply actual evidence for why it would be harmful to society, and after years of nonsense, they think they've come up with something substantial. In late 2010, the Heritage Foundation, a Washington-based conservative think tank, held meetings and discussed the need for new studies and research to back up claims that same-sex marriage is actually bad for the family. Following this, Regnerus was given $785,000 to conduct his study. Several other studies were also commissioned from the same meetings.

Although Social Science Research, the journal that published Regnerus' paper, is respected in its field, it's become drenched in controversy, as many experts have criticized the paper's very methodology and findings and in turn questioned the journal's editorial decisions.

Numerous other studies have found no correlation between a child's well-being and whether the parents were in a homosexual or heterosexual relationship. In fact, the majority of such research has found that children of single mothers, adopted children, children of divorce and children in poverty all have worse outcomes on average than children in stable middle-class marriages, and since only about half of the children in the U.S. live with married, biological parents, it seems much more likely that something other than a same-sex marriage could be causing the perceived problems some children face.

The takeaway: Science and research is a powerful tool, but from cases like this, it can clearly be used incorrectly and result in some serious damage. Though Regnerus' study seems quite weak and a number of experts are ready to testify against him and his findings, the very fact that the federal court will be hearing his testimony almost seems like an affront to science. Of course, scientific advancement only comes when ideas are debated and discussed, but Regnerus' study has already been heavily dissected and the results are clear: he's wrong. Entering it into evidence in this case only unfairly legitimizes his work on an issue that's already rife with non-science and false information.