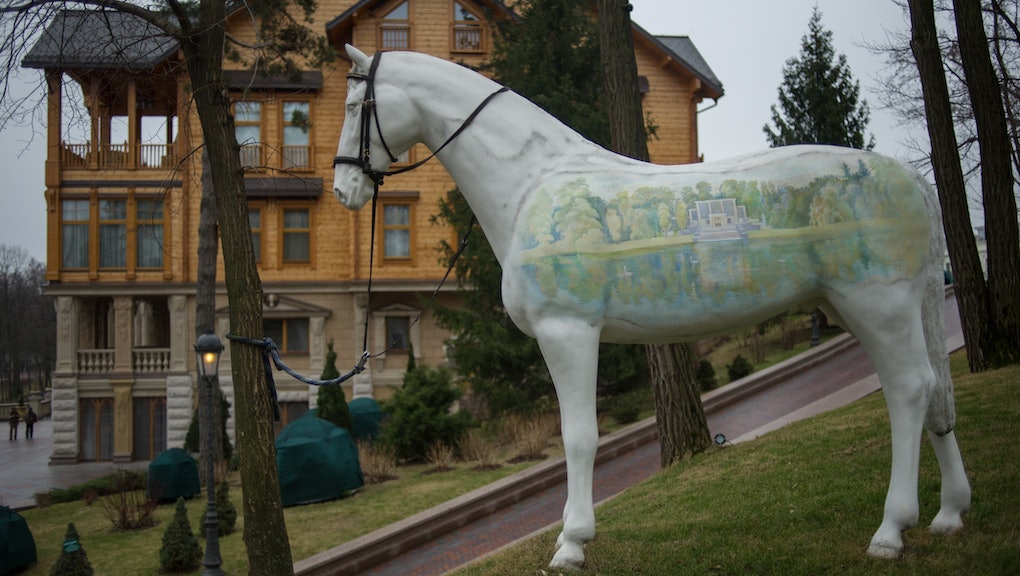 As protests continued to light up the streets of Kiev, one group of Ukrainians made their way an hour's drive from Kiev to Mezhyhirya to see President Viktor Yanukovich's luxury estate after the country's leader fled into hiding on Saturday and the estate's security detail deserted.

Though Ukrainians knew about their eccentric president, it's hard to imagine they were ready to see what turned out to be a 345 acre estate with a golf course, helipad, garage filled with classic sports cars worth millions, exotic gardens filled with Australian and African ostriches, rare breeds of pigs, and a private restaurant in the shape of a pirate ship named "Galleon." Pretty weird, right?

Protesters arriving at the compound made their way around the estate as though it was a trip to Disney World, marvelling at the ornate and lavish details found at every turn. But unlike your standard presidential palace siege, there was no sacking. No destroying or stealing. No defacing or defecating. Instead, the street fighters said, they wanted to keep as much as possible intact as evidence of Yanukovich's overly lavish and opulent lifestyle.

After some time, the initial group of protesters who entered the compound went to the front gates where crowds of Ukrainians patiently waited a chance to walk around the enormous estate and see it for themselves. Everyone was instructed to remain outside of the main buildings, however, as protest leaders surveyed and documented the scene.

Protest leaders said they wanted to preserve the estate to allow prosecutors and experts to assess the contents, seeing exactly how lavishly Yanukovich lived while the average citizen lived on a salary of less than $500 a month.