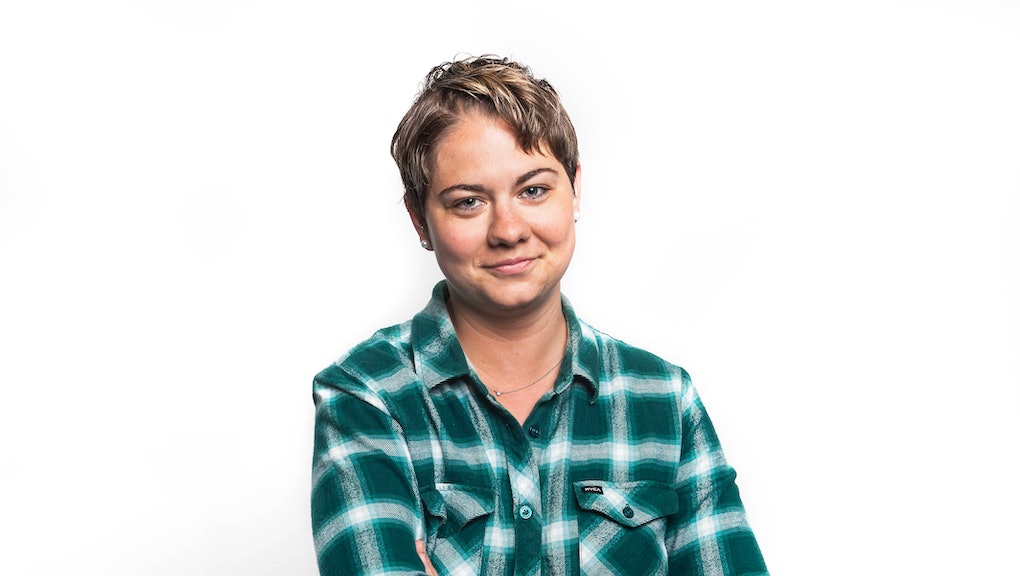 I'm Coming Out to My Parents in This Post. Thanks, Ellen Page.

Hello, my name is Meredith Autumn Bennett-Smith, and for the first time in my life I’ve decided to tell everyone I know that I’m gay. With the entire Internet as my witness, this is me, coming out.

Many Americans watched actress Ellen Page's moving speech at the Human Rights Campaign's Time to Thrive conference in Las Vegas on Feb. 14. In eight alternately inspiring and adorably awkward minutes, the 27-year-old Oscar-nominated actress told an audience of LGBT advocates that she was "tired of hiding" and "tired of lying" about the fact that she was gay.

Many people, gay and straight, praised Page for her raw, sometimes painful honesty. But after that initial round of cyber applause came a second, slightly less laudatory reaction. In the media and on Facebook and Twitter, some people people wondered whether Page's coming out was news.

"This is 2014," these (mostly straight) friends exclaimed. "We have a president who endorses gay marriage, we've got Anderson Cooper and Rachel Maddow and (the original) Ellen, for God's sake!" Over at TIME magazine, the gay community's contrarian du jour Brandon Ambrosino wrote an op-ed titled, "Ellen Page: Is Coming Out Really Still 'Brave'?"

Coincidentally, I'm only a few months younger than Ellen Page. Like Page, I live in a relative bastion of liberal sentiment. I have many intelligent, progressive friends and work in a traditionally supportive industry. Also like Page, it took me until I was in my mid-20s to officially come out: 26 years, three months and seven days, to be exact.

Watching Page stand at that HRC podium, I was moved as much by her words as by her nerves. The young woman's voice quivered and nearly chokes; her mannerisms were disjointed and shaky. Call me a coward if you want, but don’t tell me her speech "doesn’t matter" anymore.

Page's speech mattered to me. It may very well matter to your neighbor's son or your coworker's daughter. Just like attraction, fear is a universal emotion unconstrained by human distinctions like socioeconomic status, race, gender or hometown.

In homes around America and around the world, LGBT people still suffer emotionally and physically because of the most intrinsic of human feelings — who they love.

That we may no longer need to recognize coming out stories proves just how far society still has to go in terms of raising true awareness. No, not all queers are gorgeous like Portia de Rossi or hilarious and well-tailored like Neil Patrick Harris. (And that's a good thing.) In reality the queer community is vast and tremendously diverse, in many cases far removed from the hypersexualized fantasyland of The L Word or the cheerful suburban bubble of Modern Family. Lest we forget, America is full of those for whom coming out is still a terrifying prospect: Just ask our tens of thousands of homeless LGBT youth.

In order for us to move forward towards equality, we must first recognize this fact and elevate these marginalized voices to join a nationwide conversation. As Identities editor at PolicyMic, I want to provide a platform for this kind meaningful, informed discourse by offering all experiences a chance at the podium.

Do I wish that this type of story was no longer a "big deal?" Of course. But it can be easy for the media and other allies — however well-meaning — to forget that it is still a story, and for good reason. Coming out is not a one-time, cathartic moment heralded by happy unicorns and singing rainbows. For many, having to "come out" is a phenomenon necessitated over and over again — to say nothing of the different, albeit equally gut-wrenching experiences of our non-cisgendered brothers and sisters. It's still a straight, straight world, and everyone else is just living in it.

I've been coming clean to my friends and co-workers slowly but surely for the past few years. But I've never had "the" conversation with my parents and three younger siblings, nor have I come out to most of my friends back home in California. I have become, to use Page's words, an expert at "lying by omission."

It's an experience so many people in the queer community know by heart: the evasive posturing, the pronoun contortions, not to mention the guilt. When I was in college, the guilt stemmed from a worry that I was feeling something dirty or weird — definitely abnormal. Later, when I began to come to terms (and embrace) who I was, I began to feel guilty that I wasn't gay enough, wasn't courageous enough, to come out to the people I loved most in the world.

We will never know what made Ellen Page wait so long to come out. Who knows if she was worried about her career, or, like me, the decision hinged on anxieties that hit much closer to home.  But whether it's the fear of disappointing loved ones, of facing negative repercussions in work or living situations, of being confronted with violence, imprisonment or even death, the fact remains that even in 2014, reasons to remain in the closet aren't hard to find. We must talk about why that is.

While the decision to publish this column was terrifying for me, I didn't write it in an attempt to appear brave. Nor am I looking for accolades or congratulations. Harvey Milk believed that every coming out story had the potential to make a difference. While I personally maintain that deciding when to come out is an intensely personal decision, as a journalist I have to agree with Milk's broader point. Our individual narratives provide a powerful lens through which to examine broader cultural ones — a fundamental reason why PolicyMic is so special.

Last week, Ellen Page added her voice to a growing chorus, and today I am proud to add mine. But more importantly, today I pledge to help ensure that the Identities section is a space for people to tell their own unique stories, in their own way, in their own time. Even as we celebrate the tremendous strides made in the fight for equality recently, we must remember and acknowledge the voices within our community that continue to struggle to be heard.