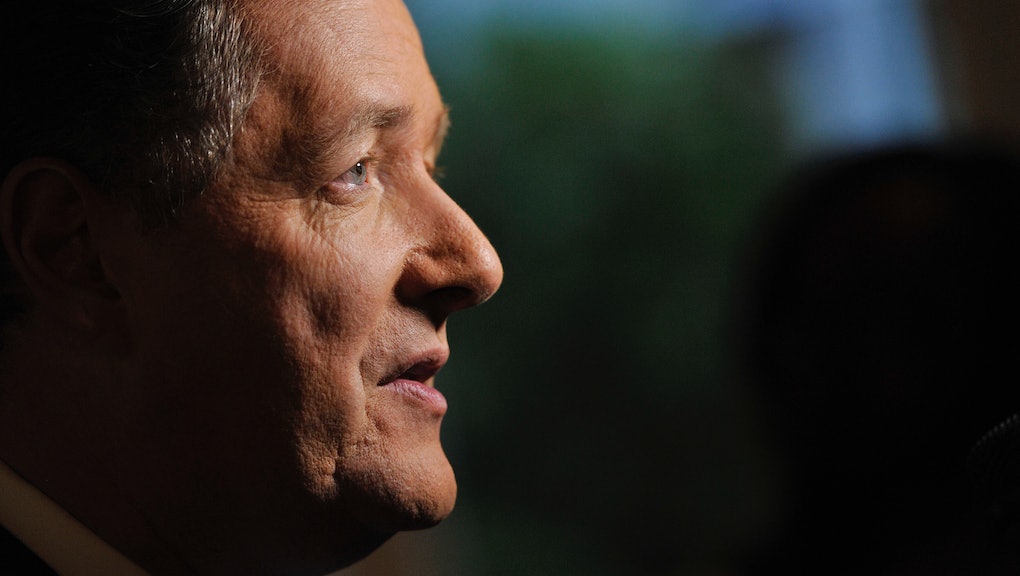 These 3 Videos Perfectly Show the Downfall of Piers Morgan Live

On Sunday, CNN announced they would be pulling the plug on Piers Morgan Live, one of the network's prime time news/opinion shows after the program failed to gain any substantial ratings after three years.

Perhaps Morgan should have seen this coming. After taking over for Larry King in a time slot that's statistically very popular with many viewers, Morgan floundered and could never really compete with the likes of Rachel Maddow at MSNBC or more recently Megyn Kelly on Fox News. In an interview published Sunday in the New York Times, Morgan said, "It's been a painful period and lately we have taken a bath in the ratings."

But why was Morgan so unsuccessful with a format and style that King excelled in? It wasn't what Morgan was saying, it was how he said it.

Exhibit A: Morgan's clash with controversial conservative radio host and conspiracy theorist Alex Jones. Morgan invited the outspoken radio host onto his show after Jones led a petition to deport Morgan back to the U.K., partially because of his aggressive anti-gun views, never minding the fact that in doing so he would be giving a prime time slot to someone who thinks 9/11 was an inside job.

You can also watch Part 2 here, but keep in mind that things just keep escalating. Almost regardless of what you think of Alex Jones and his ideas, the way both sides conducted themselves during this debate was just cringe-worthy. Morgan repeatedly spoke down to Jones as though he was a lost, petulant child even though Jones continued to cite arguably reasonable statistics, and the two basically found themselves in a screaming match. What's strange is that something like this should usually make for good TV, but it was just another example of the British Morgan talking down to the American Jones.

Exhibit B: The recent and now infamous interview with Janet Mock, the American trans woman rights activist and author.

There wasn't a lot of conflict between them during the interview, but Mock was less than pleased with it was conducted and the trans gender community was quick to express their distaste with Morgan's show. After a social media backlash and fiery war of tweets, Morgan brought Mock back on to his show for a follow-up interview, which is where the real problems started.

Instead of actually addressing Mock's concerns, Morgan used the segment to try to de-vilify himself from what he described as a chaotic 24 hours. Immediately after that, CNN held a round-table discussion to breakdown what had happened in Morgan/Mock Pt. II, likely hoping to clear some things up and put the network and Morgan back in a positive light. Unfortunately, it wasn't very helpful either.

The whole situation probably could have been remedied with a simple apology for what could  have been a misunderstanding, but Morgan took things in a radically different direction. In fact, this was a moment where Morgan could have likely gained a lot of support by admitting is mistake and apologizing, but instead he just continued his tantrum and understandably put a lot of people off.

Exhibit C: Perhaps the best example of Morgan's problem comes in the form of a previous interview with Republican Tea Party candidate from Delaware Christine O'Donnell.

While you could certainly argue that O'Donnell was being kind of weird the whole time and refused to understand what the point of an interview like this was, Morgan was annoying enough that he basically forced her to walk off the show halfway through the interview. It was clear where Morgan was going with his line of questioning and O'Donnell was just not interested — understandably so, she was quite a few views that can be difficult to defend on national television.

But there's one line in particular that perfectly sums up not only this interview, but perhaps Morgan's entire tenure as the host of his own CNN prime time show.

If only you understood Piers, then maybe you wouldn't have been cancelled.