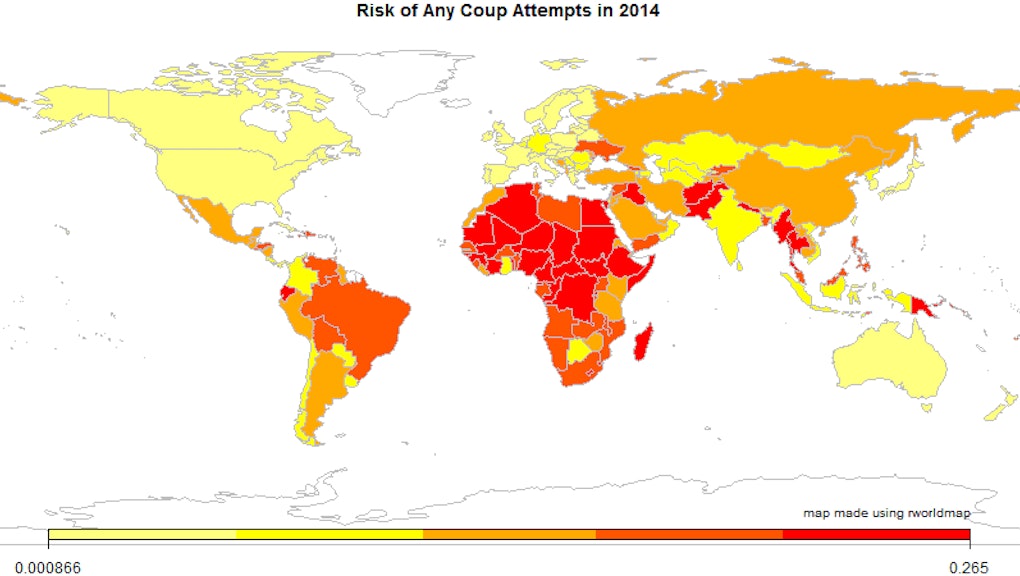 This Map Shows Where The Next Military Coup Will Likely Happen

Which countries are at the highest risk of a coup d'état this upcoming year? While in any individual country a coup seems highly unlikely at any given time, this map from dartthrowingchimp shows the relative risks each country faces from a revolution instigated by its own armed forces.

The above heat map sorts the world by fifths into various levels of risk. The map's creator, Jay Ulfelder, says that at around 80% of the countries which undergo coup attempts this year are likely to fall into the uppermost category (red). Meanwhile, this chart plots the unweighted average of two different forecast models to determine the "single-best" forecast of the risk of a coup.

Wouldn't want to be in Guinea.

So here's the process Ulfelder used: First, he amalgamated the number of previous coups using two data sets representing countries with any successful or any failed coups. He then incorporated over a dozen variables (ranging from the age of the country and political stability to economic growth and regime type) to determine the overall risk in 2014 of a coup in each country. The result was this worrying map. An improved version highlights just those countries in the highest-risk two fifths, singling out Asia and Africa as the least stable places for governance.

As the Washington Post's Max Fisher notes, the risks are quite heavily concentrated in West and Central Africa, as well as the Sahel region (the east-west strip below the Sahara). It's also particularly high in Thailand (10.9% risk), where indeed unrest is brewing, as well as Egypt (9%), Pakistan, and Afghanistan. Haiti and Ecuador are the outliers in the Western Hemisphere, which seems comparatively quite stable.

And as Fisher notes, the map quite accurately shows the relative comfort advanced Western countries have in that they don't have to worry often about the military kicking down the door and arresting the president. For all the conspiracy theories and more mainstream rumblings of discontent across the U.S., South and Central America, and Western Europe in recent years, it's clear civilian control of the armed forces is for the near future largely incontestable.