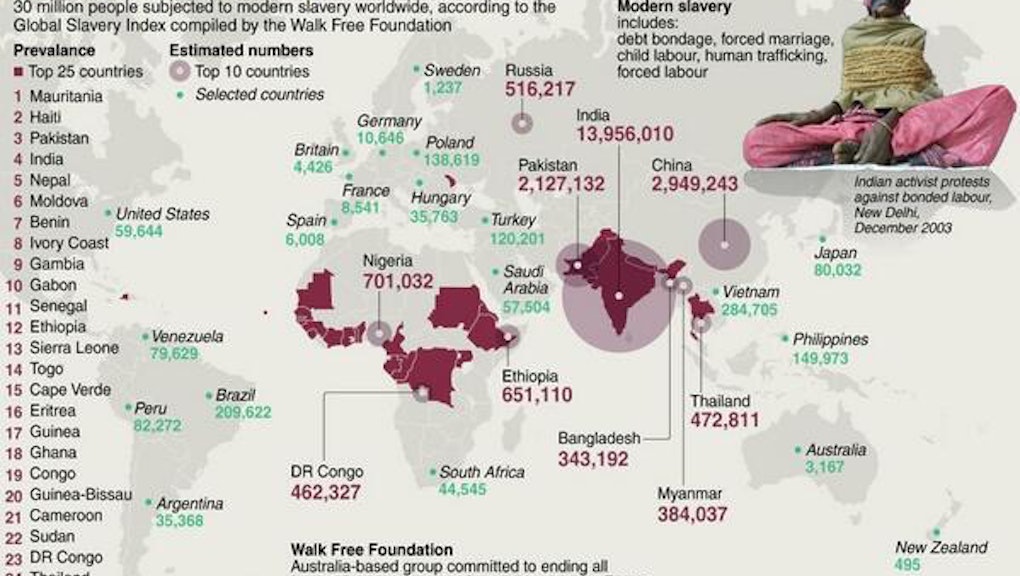 This Sobering Map Shows How Many Slaves Are in Each Country

The news: When 12 Years a Slave director Steve McQueen won the BAFTA award for Best Director, he made an important pronouncement: “There are 21 million people in slavery as we sit here … I just hope that 150 years from now, our ambivalence will not allow another filmmaker to make this film.”

McQueen was right to raise this issue, considering he’s responsible for one of cinema’s most damning indictments of enslavement. But he may have undersold the numbers: according to the Walk Free Foundation’s Global Slavery Index 2013, it’s closer to 30 million, almost 60,000 of whom live in the U.S.

As part of this study, “the first of its kind,” Walk Free provided a country-by-country estimate of the world’s enslaved population. Here’s a map based on its findings:

A worldwide phenomenon: Aside from these staggering numbers, it’s sobering to visualize just how global a problem slavery is. Almost no country is untouched – even nations with relatively low slave populations, like the United Kingdom, house thousands of enslaved men, women, and children.

Walk Free defines slavery as one of the following: human trafficking, forced labor, debt bondage, forced or servile marriage, and the sale or exploitation of children including in armed conflict. Since modern slavery is “poorly understood,” even these definitions and the numbers they produce aren’t entirely reliable.

1. A composite estimate of the number of people in slavery in each country

2. An estimate of the level of human trafficking from and into each country

3. An estimate of the level of child and early marriage in each country

Here are the 10 countries with the highest prevalence of slavery:

In terms of raw numbers, India has the most slaves in the world, with an approximated 14 million. The report also lists the most egregious slave nations by continent.

What now? Determining these numbers is one of many steps needed to eliminate this global epidemic. While slavery and its victims remain hard to accurately quantify, the Global Slavery Index is an important tool for beginning to do so. Ignorance is no longer an excuse for legislators after seeing these numbers. And as Steve McQueen said, let’s hope it doesn’t become a question of ambivalence either.