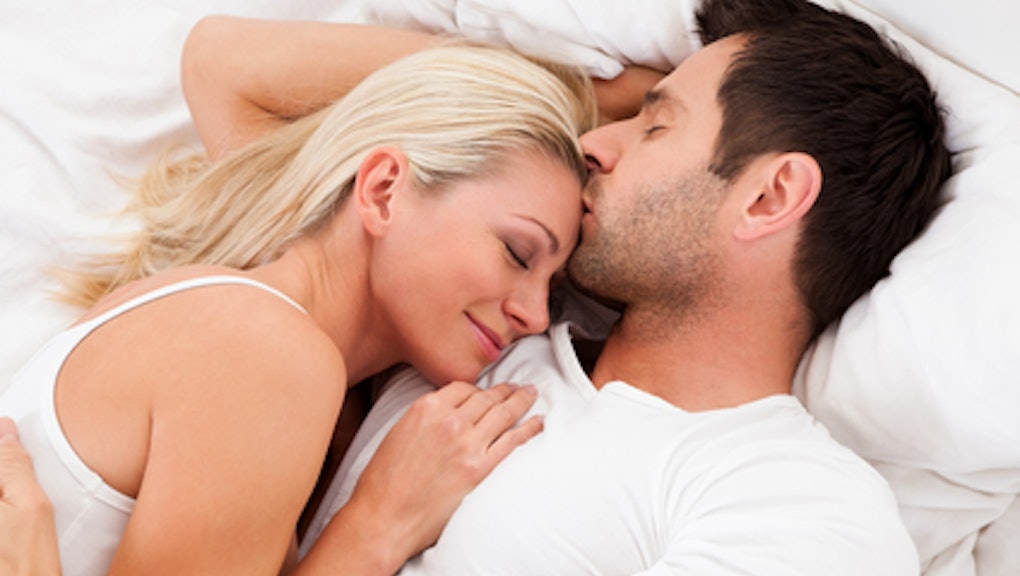 How to Have Great Sex in a Gender-Equal Marriage

It's no surprise the article received so much attention as gender issues are gaining more and more coverage in major news outlets. But, let's not give into the spectacle just yet. Before all the heterosexual, gender-conscious married people start reevaluating their satisfaction in bed — and certainly before married men decide the best course of action is to stop washing dishes immediately — it's worth noting some major flaws in Gottlieb's research that led to these controversial findings.

1. Her research is super old.

Gottlieb heavily relies on a study published in 2012 called "Egalitarianism, Housework, and Sexual Frequency in Marriage." Its main data source is Wave II of the National Survey of Families and Households, which conducted interviews from 1992 until 1994. If you've done the math, you may have noticed that 1994 was 20 years ago.

Just to give some perspective, 1994 was 15 years before the Lilly Ledbetter Fair Pay Act was signed into law, and way before Hollywood welcomed women characters who actually resembled real women (Thank you, Tina Fey).

People have begun to think seriously and critically about traditional gender norms over the last two decades, including the weight behind words like husband, wife, masculine and feminine. Maybe some updated research — and a lot of it — would better suit our matured understanding of gender.

2. She ignores the possibility of survey participant bias.

Gottlieb and her sources agree that marriages with evenly split-household chores see less sex than marriages where women cook and clean and men chop wood and hunt mammoths. According to the 2012 study, women in less egalitarian marriages may be motivated to have more sex to fill the role of the "good wife," whose goal is to satisfy her husband.

Though astute, the study quickly dismisses this possibility on the grounds that these women reported high satisfaction in their marriages. According to the authors, they would have reported low levels of satisfaction if their impetus for having more sex was to solely meet their husbands' needs. The authors don't consider that women who consistently put their husbands' sexual needs before their own for the sake of being good wives are unlikely to participate in a personal study with strangers.

3. She skews interview analysis to fit an overall thesis.

To further support her argument that gender equality threatens sex lives, Gottlieb, a licensed psychotherapist, cites a therapy session with a struggling married couple. The husband noted that although he and his wife had become closer after dividing household responsibilities evenly, they were having sex less frequently. He worried his wife was less attracted to him, which she promised was untrue, and mentioned that she especially wants him when he comes home from the gym.

"Her husband countered by saying that this very situation had occurred that morning but that his wife became irritated when he tossed his clothes on the floor, which led to a conversation about his not vacuuming the day before, when she worked late," Gottlieb noted.

From this exchange, Gottlieb attributes the couple's infrequent sex to their gender-neutral household dynamic. She agrees with Julie Brines, a co-author of the 2012 study, who claims that "the less gender differentiation, the less sexual desire."

But Gottlieb's interpretation doesn't account for a secondary explanation that potentially had nothing to do with breaking gender norms: It was the husband's failure to uphold his end of the equality deal that killed the sexual vibe. Had he vacuumed when he said he would, and put his clothes away after the gym, his wife's attraction would have been sustained. Although the details of other couples' bedroom struggles are not specified in the article, it's easy to imagine that other of Gottlieb's patients may have struggled due to a partner's failure to uphold equality, not a fear of breaking gender rules.

4. She reads too much into the role of household chores in a marriage.

Gottlieb seems to believe that husbands' increased participation in traditionally feminine chores is sucking the sexual energy out of their relationships.

"It's true that being stuck with all the chores rarely tends to make wives desire their husbands," she writes. "Yet having their partner, say, load the dishwasher — a popular type of marital intervention suggested by self-help books, women's magazines and therapists alike - doesn't seem to have much of an affect on their libido, either."

Interesting finding, perhaps, but the point of cleaning is just that — to clean. If women aren't sexually satisfied with their husbands before and after the chores are split, it's time to examine other areas of the marriage. Blaming the dishes is just lazy research.

5. She discounts the progress we've already made.

Gottlieb will have you believe that the sexless status-quo will hold up forever, and that heterosexuals ought to get used to the idea that equality isn't entirely beneficial. She quotes Esther Perel, a couples therapist and author of "Mating in Captivity."

"It's the first time in history we are trying this experiment of a sexuality that's rooted in equality," Perel said. "There's a certain part of you that with this partner will not be fulfilled."

While Perel's point has merit — partners don't entirely complete each other — her outlook on equality's effects on sex is pretty grim.

The world is only beginning the understand terms like gender, feminism, stay-at-home dad, and women's needs. Until recently, women in this country were expected to do all of the housework and the bulk of the childrearing.

We know from the evolution of past social developments that it can take a while for everyone to adjust. The discomfort some people feel about issues like women earning more money than their husbands should wear off, and when it does, it'll be worth it.

6. Ultimately, it's all a matter of choice.

Despite the counter-intuitive logic, it is possible to be a staunch supporter of gender equality and prefer a traditional role during sex, i.e. a woman being dominated by her husband. There may be some conflicting or confusing feelings about this (and, what a great opportunity for an interesting discussion with your partner!) but, as long as it's between two (or five or 10) consenting adults, let your freak flag soar. Just remember to share the laundry load afterwards.