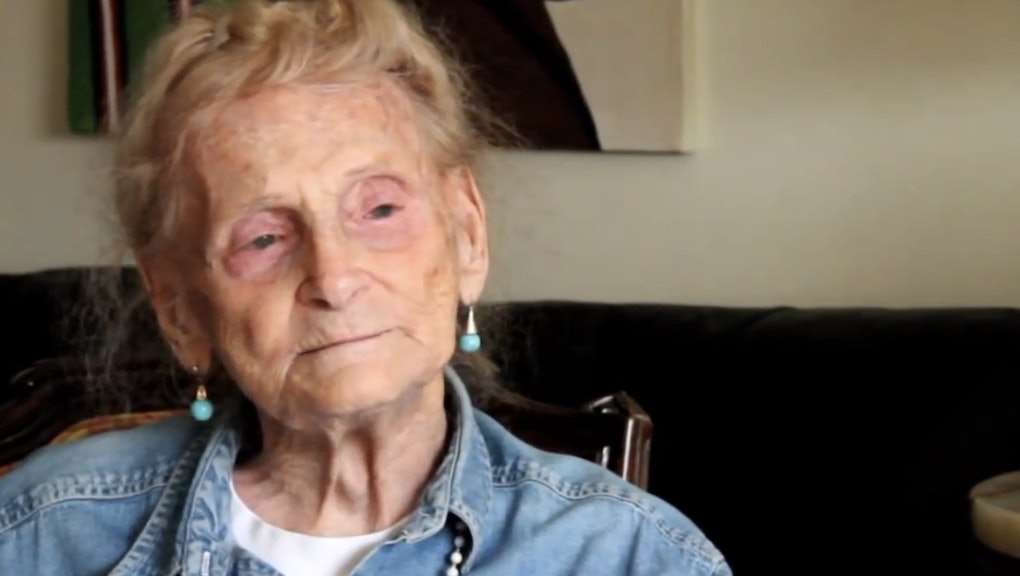 A 92-year-old veteran just bagged a major victory for transgender spouses in the U.S. While it represents only one victory in an ongoing struggle, the feisty nonagenarian proves it's never too late to stand up for your rights.

When her husband of eight years died in 2012, Robina Asti applied to the Social Security Administration (SSA) for survivor benefits, the insurance payments granted to widows and other close relatives of a deceased person. After a year of review, the SSA denied her application citing the case's "unusual" nature. At the time of Asti's marriage, the rejection claimed, she was not a woman and therefore did not qualify for widow's benefits.

The SSA delivered this verdict despite the fact that Asti's pilot's license, social security, driver's license and U.S. passport declare her a woman.

Lambda Legal, the LGBT advocacy group, backed Asti's campaign, arguing the widow was legally female at the time of her marriage. Their efforts apparently paid off on February 14, when Asti found an unannounced payment sitting in her bank account.

In a moving video created by Lambda for the campaign, Asti recounts her experiences as a pilot, as a trans woman and as a wife. Before her transition in 1976, she flew airplanes for the Navy during World War II, and in the decades after the war she worked her way up to be vice president of "a pretty big" mutual fund.

"The prejudice against me changing was extraordinary," Asti says in the video. "Once I made the change, I became a woman in body, and soul and mind." She soon followed suit, legally becoming a woman.

She describes meeting her husband, Norwood Patton, in a bar shortly after her transition. He didn't respond well at first when she told him about her change, but within a week came back to her with a change of heart. "He told me, 'Look, I don't care. You're a woman, I've only known you as a woman, you are a beautiful woman and I love you, I'm very devoted to you and I want always to be with you,'" Asti says as her voice cracks. "And that was the summation of it. ... It was without a doubt the finest time of my life. He was 97 when he died, so we were a couple of old fogies."

And yet the SSA didn't recognize Asti's gender nor her marriage to Patton. When she heard about the denial, she said, "I was shocked. I was shamed. That is so insulting. It was just devastating."

Asti's success is no mean feat; getting an official administration to recognize the plight of even one individual should be celebrated. But as she says in the video, there are countless other people in the trans community who have lost the support of their friends and family, and for whom suicide seems the only option "because they didn't have anyone to look at them and say, 'I understand.'"

For Asti, this case was never about the money. Rather, she was fighting for "the act of humanity necessary here" and the wider issue that needs to be addressed.

Indeed, by forcing the SSA to re-evaluate her case, Asti has given hope to other transgender spouses in similar states of limbo. But it's important to remember that despite Asti's success, the SSA has not yet changed its policy, or even delivered anything in writing that could pave the way for future policy changes. That still leaves many people not guaranteed the same legal protection as their peers.

"Lambda Legal has received calls from other transgender spouses trapped in SSA limbo, as Robina was," Dru Levasseur, Transgender Rights Project director at Lambda Legal, said in a press release. "We await changes to the SSA policy that would clarify its position on transgender spouses to ensure this does not happen to others, which we are hopeful will soon be released."