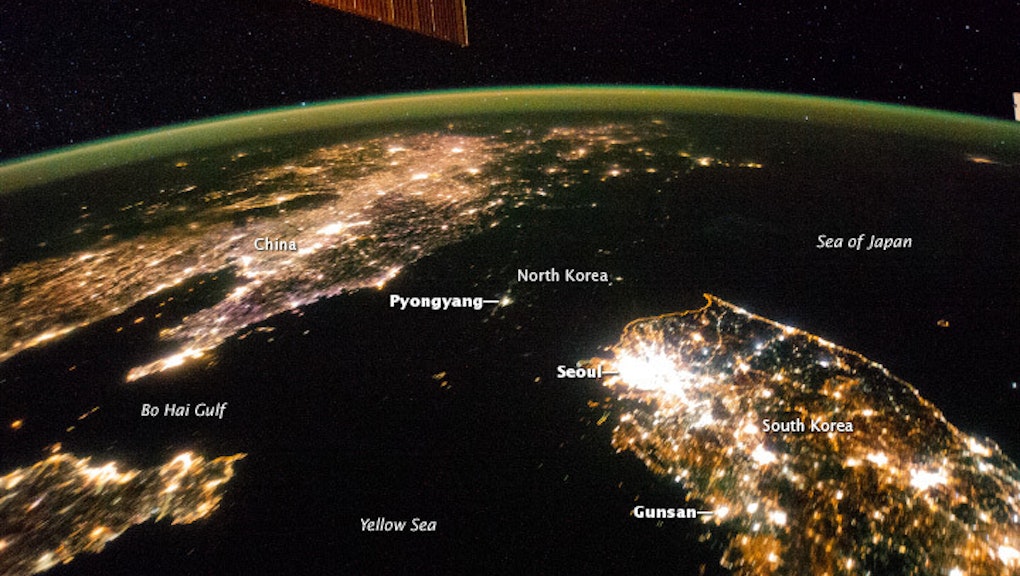 This Is What North Korea Looks Like From Space

Astronauts on the International Space Station took this image of East Asia and the Korean Peninsula obtained by NASA on Jan. 30, and you might notice something that looks a lot like an ocean right where a reclusive nation of 25 million should be.

It's not an ocean. It's the legacy of the Kim dynasty's brutal 66-year tenure over North Korea, a nation so deprived and underdeveloped that its electrical infrastructure isn't even visible from space despite a population density of approximately 205 people per sq. kilometer. South Korea's per capita power consumption is 10,162 kilowatt hours; North Korea's is 739, and that's with fairly extensive rolling blackouts and continuous power outages.

Looking down on North Korea, you might as well be looking down on the Bronze Age. A few faint points of light give light to the hermit kingdom's few major cities, most prominently Pyongyang — a light signature NASA describes as "equivalent to the smaller towns in South Korea." Otherwise, the nation is hardly even detectable.

As The Atlantic Cities writes, North Korea has flickered like a candle in the breeze since the collapse of the Soviet Union, when fuel supplies were cut off. Subsequent deals with America were cut off due to either the Kims' intransigence or extortionate U.S. demands, depending on who you ask (but then again, you can't ask a North Korean). And notes Barbara Demick, North Korea isn't so much an undeveloped country as one "that has fallen out of the developed world," with the ruined, rusted remnants of the once-nationwide power grid visible from most roads and where even cargo trucks are stifled by lack of fuel.

Looking down, it's not just a black spot on a map. It's a look down at a barren wasteland ruled by petty tyrants, a place which seems incongruous with the modern world ... an odd, depressing holdover of a bitter, war-torn century which the world has gladly left behind.