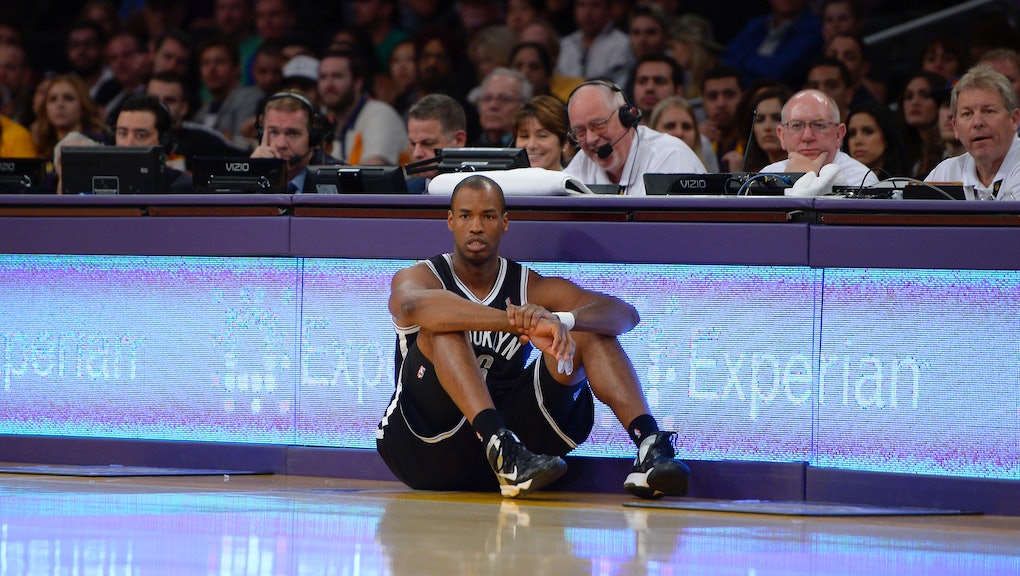 In case you missed it, Jason Collins made history this past weekend, becoming the first openly gay athlete to play in one of the four major professional sports. Less than a year after coming out, Collins signed a 10-day contract with his former team, the Brooklyn Nets, stepping onto the court with little fanfare to face the Los Angeles Lakers in the middle of Sunday's game.

Compared to the buzz that has surrounded NFL prospect Michael Sam's coming out in recent weeks, Collins' signing flew under the radar. Many have hailed the quiet nature of the move as a sign of progress — that we've reached a point in our society at which being gay in professional sports is no longer a big deal. ESPN's Michael Wilbon and Tony Kornheiser postured that Sam's spotlight has eclipsed Collins' (even though Sam has yet to actually make an active roster and his recent performance at the NFL Combine disappointed many scouts). "I think it's no big deal and that's exactly the way it should be," said Dallas Mavericks owner Mark Cuban, himself no stranger to lending his loud mouth to seemingly innocuous issues. And while these comments simply serve to downplay the role of one historic moment in a broad arch of progress, others have been more forthcoming about the prejudices that inform their wishes to keep Collins' sexual orientation out of headlines. As many Breitbart commenters predictably stated, "Keep it in the bedroom." (That this is akin to telling Collins to stay in the closet is completely lost on these people.)

The Wall Street Journal's Jason Gay terms these naysayers as the "Who Cares" crowd, rightfully noting the hypocrisy of the first group of people who somehow think their laissez-faire attitude toward a gay athlete demonstrates the level of their progressivism rather than their ability to strike a dismissive pose from such position of privilege. (Think Stephen Colbert's brilliant refrain of "I don't see race" — except these people aren't joking.) While a society in which the color of a person's skin or the gender of a person's partner don't matter at all is an admirable ideal to uphold, the reality is that we're quite far from that utopia of tolerance. Insisting otherwise ignores the daily struggles experienced by marginalized groups who have yet to achieve full equality and rights.