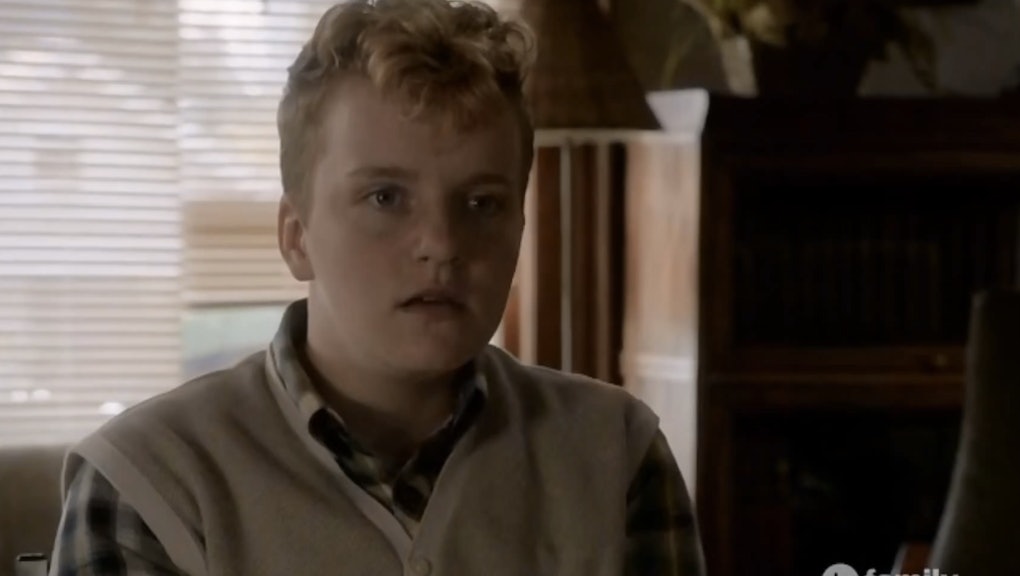 My heart leapt when I heard a transgender actor would be portraying a transgender character this month in ABC Family's The Fosters. I tuned in with even more glee than usual to a show that had already won me over with its portrayal of a mixed-race, same-gender couple filling a home with love and chosen family.

Of course, I wish I already lived in a world where a 17-year-old trans actor landing a role on a hit show was not cause for celebration and the entertainment industry already aimed to fill trans roles with trans actors.

But my dream isn't yet reality, so it felt like a victory to watch Tom Phelan bring Cole to life.

Though a young actor, they (Phelan prefers gender-neutral pronouns) don't disappoint as a fierce and guarded Cole. They skillfully brood, bristle, explode and eventually reveal a tender heart, embodying a character who stands up for himself; a young man entitled to inhabit his rightful gender, body and space. Cole affirmed me as a transmasculine viewer, even as his narrative diverged from my own — which felt right since trans lives are each unique and complex.

Fan response from the The Fosters' teen viewers has been overwhelmingly positive. Cole is a well-loved supporting character, and Phelan's own desirability and artistic interpretation of the role has a clear appeal to a teen audience. For many, this may be the first adolescent trans person they have encountered and can relate to, either as supporters or trans youth themselves. Trans visibility in youth pop culture will play an important role in developing a society that better embraces gender variance.

After all, teens today will come of age and inherit roles in educational, medical and legal institutions. When this happens, understanding between cis and trans peers will help make the difference between perpetuating or dismantling exclusionary systems.

Phelan now joins a handful of other trans actors, including Candis Cayne (Dirty Sexy Money), Laverne Cox (Orange Is The New Black) and Harmony Santana (Gun Hill Road) who have played trans characters in mainstream media. Phelan adds to a critical mass of trans talent that our community may not be surprised to learn exists, but may be news to much of the cisgender world.

I'm undoubtedly not the first to say so, but it bears repeating: There is no bottom to the well of trans creativity. Transgender actors— as well as writers, musicians, painters and other artists — exist and aren't largely unknown because they lack talent, but because they lack opportunity.

Phelan's easy experience trying out for the cast of The Fosters speaks volumes about the role producers and talent scouts play in either gatekeeping or opening the acting world, and helps address an unspoken doubt about whether it's possible to find enough trans actors to fill such roles.

Of course, Phelan definitely had some advantages not every actor has: living in Los Angeles, a supportive parent and access to information. They also point out on their blog how their white skin, able body, fairly traditional masculinity and embodiment of (trans) manhood in a patriarchal society contribute to their visual "palatability" for audiences. But note the key factor that didn't work against, but rather for them.

Trans casting is essential because it breaks the cycle of community invisibility. Without it, cis people are more likely to believe they've never met one of us. This in turn keeps cis folks deciding where, when, and how trans lives become relevant to popular culture and conversation. Though it might not look like it, these are forms of oppression, no matter how glamorous the packaging.

Trans people have seen enough cisgender actors vacation in our lived experiences and win awards for their "courage" and"'skill" (see: Jared Leto in Dallas Buyers Club), while trans people (especially trans women) live those lives and remain either largely invisible or dangerously hypervisible for it.

If television and film continue to benefit from mining the pathos and triumph of transgressing gender in a binary world, they owe it to trans communities to give our artists key roles — in front of and behind the camera. This isn't an unrealistic fantasy, it's a reality. Tom Phelan's work in The Fosters is only the latest reminder.