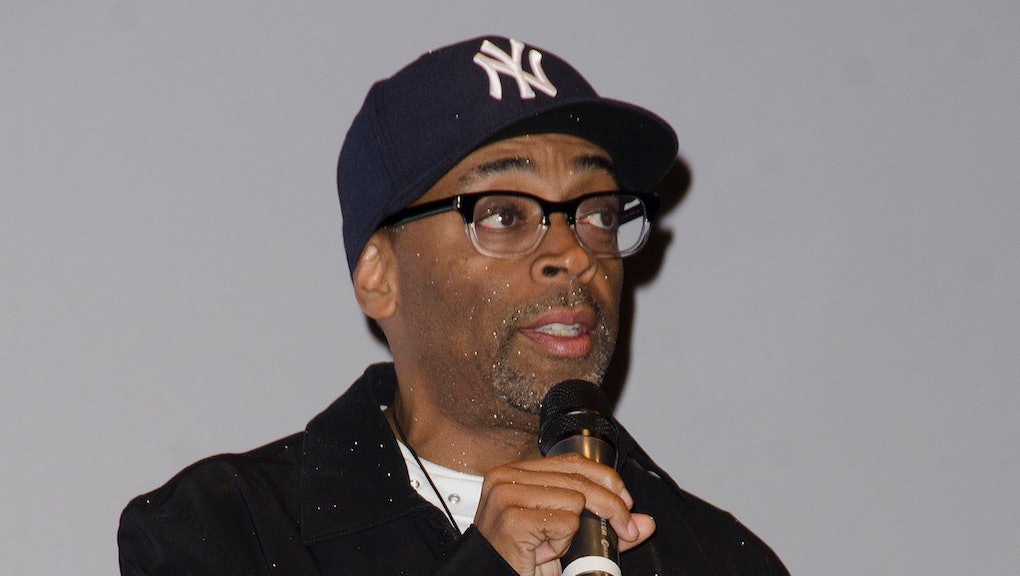 Speaking at the Pratt Institute in honor of African American History Month, celebrated filmmaker and consummate Knicks fan Spike Lee, wearing a Knicks beanie, orange socks, blue Nikes and a "Defend Brooklyn" hoodie, launched into a spontaneous diatribe about the pitfalls of gentrification happening across Brooklyn and upper Manhattan.

Listen to it here:

The speech was prompted by a question from an audience member regarding a possible "good side" to gentrification. Not waiting for the questioner to finish, however, Lee broke in with an impassioned takedown of that argument, as well as a recent "bullshit article in the New York Times" with a similar angle.

For close to seven, profanity-laden minutes, Lee criticized gentrification in general, and especially the trend of what he views as white people entering neighborhoods with little reverence for the people who live there and their culture:

I mean, they just move in the neighborhood. You just can't come in the neighborhood. I'm for democracy and letting everybody live but you gotta have some respect. You can't just come in when people have a culture that's been laid down for generations and you come in and now shit gotta change because you're here? Get the fuck outta here. Can't do that!

Lee pointedly asks why it appears to have taken an influx of white people into the "south Bronx, in Harlem, in Bed Stuy and in Crown Heights" to improve facilities in those areas.

"So, why did it take this great influx of white people to get the schools better?" Lee said. "Why's there more police protection in Bed Stuy and Harlem now? Why's the garbage getting picked up more regularly?"

And then there's something Lee calls the "Christopher Columbus Syndrome:"

You can't discover this! We been here. You just can't come and bogart. There were brothers playing motherfuckin' African drums in Mount Morris Park for 40 years and now they can't do it anymore because the new inhabitants said the drums are loud. My father's a great jazz musician. He bought a house in nineteen-motherfuckin'-sixty-eight, and the motherfuckin' people moved in last year and called the cops on my father. He's not — he doesn't even play electric bass! It's acoustic! We bought the motherfuckin’ house in nineteen-sixty-motherfuckin'-eight and now you call the cops? In 2013? Get the fuck outta here!

The key, according to Lee, is respect. Rather than swooping into a new neighborhood, and metaphorically "[killing] off the Native Americans," newcomers need to honor the history of the areas they have come to inhabit. There is, according to Lee, "a code."

As far as statistics, Lee has it right: according to the Center for Urban Research, Hispanics constituted  52.9% of southeastern Harlem's population in 2000; a decade later, that figure had fallen to 47.5. Whites took their place (11.5% before, 17.5% after). Another example: Home prices per square foot are up a whoopping 174% in Williamsburg, Brooklyn from 2004 to 2012. And according to research published on the Fordham Institute's blog, Brooklyn has four zip codes in the top-25 fastest gentrifying neighborhoods in the US. For a broader view of Brooklyn’s gentrification, check out this map:

New York magazine takes a more diplomatic road than Lee in an article entitled "Is Gentrification All Bad?" The magazine argues that sometimes it takes time to analyze the full effects of the phenomenon.

"[G]entrification can be either a toxin or a balm," the writer notes. "There's the fast-moving, invasive variety nourished by ever-rising prices per square foot; then there's a more natural, humane kind that takes decades to mature and lives on a diet of optimism and local pride."

But we wouldn't suggest trying to convince Lee of that anytime soon.

Do you agree with Lee? Let me know on Twitter.