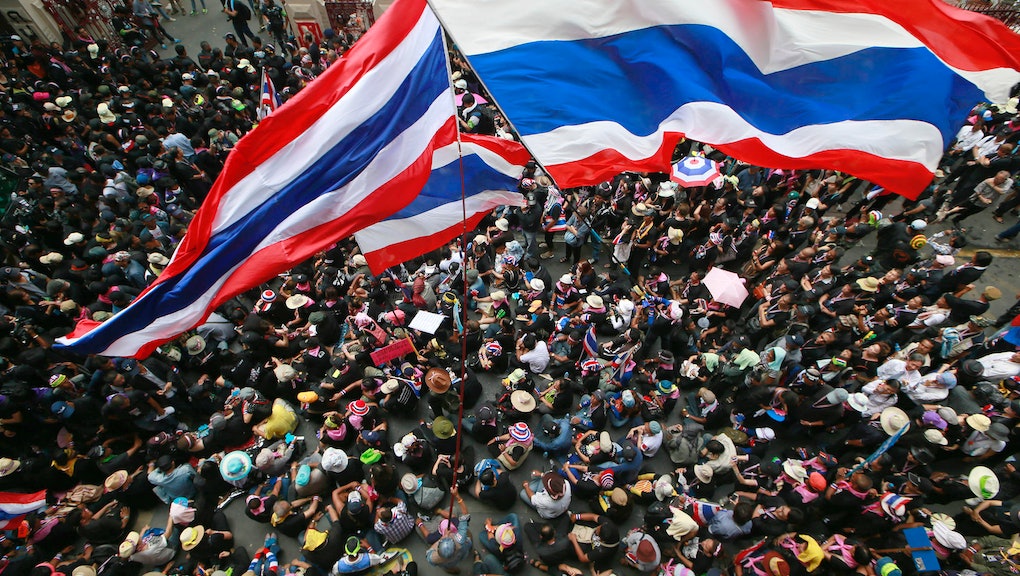 While there seems to be an end in sight for the protests in Ukraine, violence in other countries — Venezuela and Thailand — seems to be growing. Though the Thai protests have been going on since November, the country experienced a particularly bloody turn in the past few days, leading to deaths on both sides of the conflict: the protesters and the police.

If you have not been following the protests unfolding in Thailand, here is a primer to get you up to speed:

What is happening? Over the weekend, four protesters died during the demonstrations in Thailand. Three of them were children under the age of 13. A police officer has also reportedly died during the clashes. More than 70 people were wounded as both sides exchanged live fire and threw grenades.

On Tuesday, more than 6,000 people took to the streets to renew their demonstrations.

Why are the people protesting? They are protesting against Prime Minister Yingluck Shinawatra and the alleged corruption in her government. Yingluck's brother Thaksin happens to be the former prime minister, who was found guilty of corruption and removed from power through a military coup. Since 2006, the billionaire has been in exile in London and Dubai, but is accused of influencing Thai politics through Yingluck — who is seen as little more than a puppet for her brother.

The outrage reached a boiling point in November when Yingluck proposed an amnesty bill for her brother, which would have paved the road for his return to Thailand and to politics. Though the bill was roundly defeated, shots were already fired, and the protests kicked into action.

What do the protesters want? They will not settle for anything less than Yingluck and Thaksin being removed from power permanently. They also accuse the ruling party, which has won the last five elections, of dirty election tactics — and would like to see it gone as well.

The protesters, who are mostly urban and middle-class, would like to elect a new "people's council" to replace the corrupt political system. They are led by Suthep Thaugsuban, a former deputy prime minister who has vowed to institute political reform.

Yingluck called for an election earlier this month, but protesters caused disruptions at polls and organized a massive boycott, arguing that it would not have been a fair, transparent vote. The results were inconclusive, and there is currently a caretaker government in place.

How violent have the protests been? Around ten people have died since the protests began in November, although hundreds more have been injured. Last weekend's deadly clashes were caused by a shocking spike in violence.

For the most part, protesters have been blocking streets and barricading government buildings, leading the government to impose a state of emergency last month. The police have arrested about 145 protesters so far.

How is the situation looking? Yingluck (above) has been keeping up a brave appearance in the face of backlash. "I would like to ask all sides of the political divide that we may see things differently and there are many ways to express those differences," she said after the deadly attacks. "But the use of violence that lead to deaths are not the civilized way of the living."

The military, one of the most powerful institutions in Thailand, has refused to take sides in the conflict. The revered leader King Bhumibol Adulyadej has called for "stability and security," though he has refused to comment directly on the evolving conflict.

For now, the conflict remains between Yingluck's supporters and the protesters.