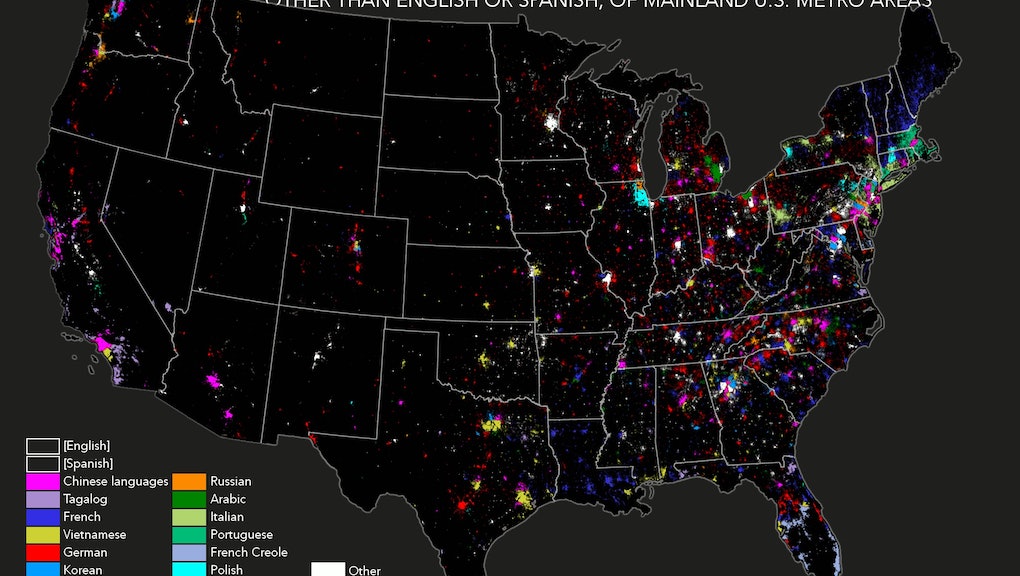 The Foreign Languages Spoken in Every Single U.S. City

Courtesy of Alexandr Trubetskoy, this map shows the most prominent languages spoken across the continental United States besides English or Spanish.

Seventy-eight percent of the population speaks English at home, leaving 22% with another language as the primary method of communication. Spanish comes in at a healthy second, with 14% of Americans speaking it at home. The remaining 8% comprises 23 million people, split into many different linguistic groups and often in enclaves throughout the nation. The map shows where these enclaves tend to be located.

Unsurprisingly, Chinese-speaking homes are largely clustered on the West Coast, but maintain a healthy presence throughout the mid-Atlantic and Northeast as well. There's also a large Vietnamese-American population in Texas, particularly in Houston, thanks to the resettlement of refugees in the area after the Vietnam War and subsequent increased immigration. Other language hotspots include large numbers of French-speaking Louisianans and French Creole speakers across Florida. German-speaking households are scattered across the country, likely reflecting Hutterite, Amish and Older Mennonite communities.

Below, courtesy of Census.gov, you can see how the distribution of languages in the U.S. has changed since 1980. Spanish has grown impressively, as have Chinese, Tagalog, Korean, Vietnamese and Russian. Western European languages such as Italian, German, Polish and Greek have fallen into disuse, presumably as the days of mass European immigration to the United States fall further into the past. Also notable is the collapse of Yiddish, which has not decreased greatly in absolute terms, but suffered a collapse in rankings as other languages far outpaced it.