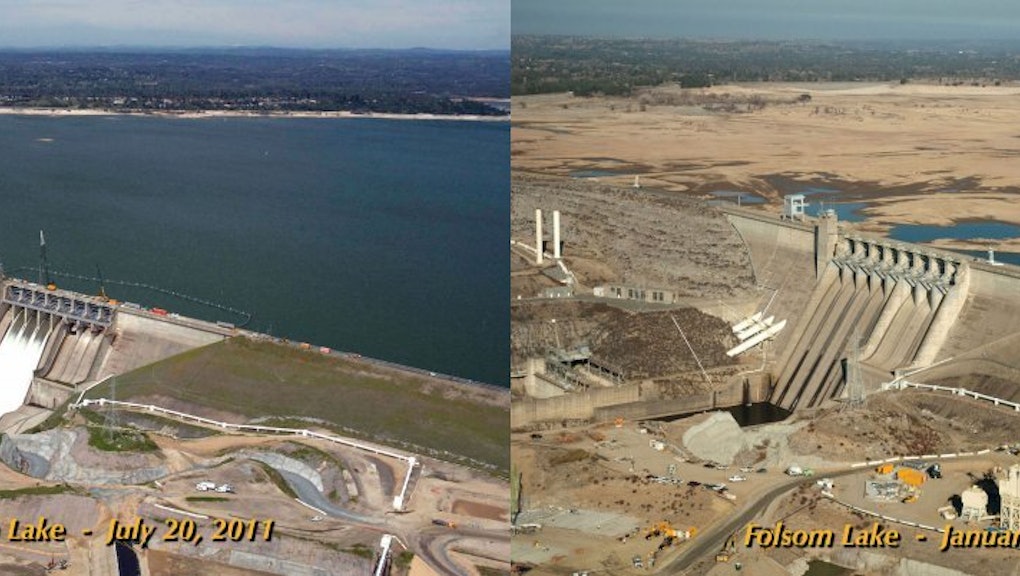 See Just How Bad the California Drought Is, in One Alarming Image

The news: California is dealing with its worst drought in at least 165 years, and the situation shows no signs of improving. According to experts, an extremely long drought coupled with the effects of global warming is drying up the Golden State and leaving many residents with water shortages. To make matters worse, the drought is jeopardizing the country's majority production of at least eight crops.

There have been numbers, statistics and warnings about this, but sometimes it's hard to fully grasp a problem until you see it with your own eyes. Well, now you can. NASA recently released these side-by-side images of Folsom Lake, a reservoir in Northern California located 25 miles northeast of Sacramento.

The first image shows the lake, which is formed by the Folsom Dam, on July 20, 2011 at 97% total capacity and 130% of its historical average for that date. In the Jan. 16, 2014 shot, the lake was at 17% capacity and 35% of its historical average. When the Jan. 16 image was captured, water levels were so low that the remains of a Gold-Rush era mining town — which had been flooded when the dam was completed in 1956 — were uncovered. It doesn't take a scientist or meteorologist to tell you there's something wrong with this.

The background: California is in trouble. The rain simply hasn't been coming, and while there have been minor signs of promise, "We still have a long ways to go before we're anywhere close to normal," according to Doug Carlson, a spokesman for the California Department of Water Resources. NASA is currently working with the CDWR to provide satellite images of the drought, and hopefully paint a clearer picture of the situation to provide an easier plan of attack.

According to the Climate Prediction Center's most recent seasonal drought outlook chart, the drought will continue or worsen in California and possibly spread to parts of the Southwest and the southern Rockies.

While these changes are somewhat cyclical, Circle of Blue produced this revealing overlay of weekly images from the U.S. Drought Monitor for California. It clearly demonstrates that this most recent drought is worse than any in the past decade.

The takeaway: While California has historically had its fair share of droughts, this time around is one of the worst state officials have seen in a long time. It doesn't take a genius to look at those photos of Folsom Lake and see that something's up. However, there's obviously no easy fix. The best Californians can do is assess the problem as accurately as possible, ration their supplies and hope for the best.