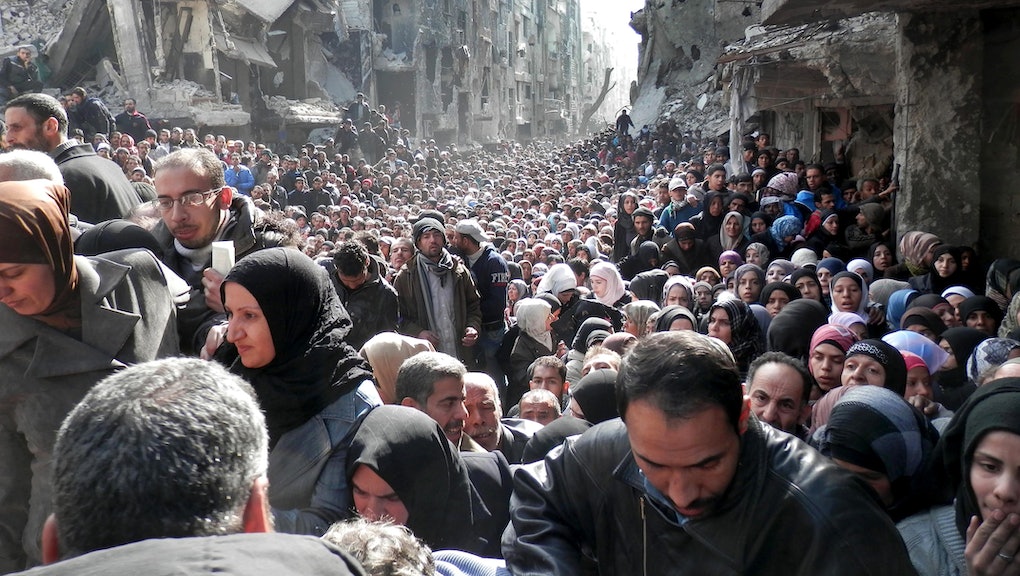 This Is What the Refugee Food Lines in Syria Look Like

The crisis in Syria is usually told through the number of people who have been killed or the severity of an attack that has been deployed. But it takes a picture like this to get a glimpse of the human toll it has taken.

The picture above, taken by the Associated Press at the Yarmouk refugee camp in Syria, shows thousands queueing for food and aid at a UN distribution point. The United Nations Relief and Works Agency (UNRWA) has reportedly distributed 7,000 food parcels since January.

UNRWA's own official has described the scene as "apocalyptic," and has called for international action to end the disaster in Yarmouk.

Located just south of Damascus, the refugee camp has been the site of a devastating eight-month siege, caught between the pro-Assad forces and the rebel fighters. Though UNRWA has been able to negotiate a deal with both sides to deliver food and aid packages, they have to fight everyday to get the supplies through, and they have not been able to deliver nearly enough to feed the 20,000 Palestinians who are trapped within.

"The Palestine refugees with whom I spoke were traumatised by what they have lived through, and many were in evident need of immediate support, particularly food and medical treatment," said Filippo Grandi, the UNRWA Commissioner.

The siege has forced most refugees to live off a diet of water, animal food, spices, and weeds. The lack of proper food has caused a malnutrition crisis within the camp, especially among children. More than 80 people are estimated to have died due to starvation and malnutrition.

"Just today, three people tried to go to an empty field to eat grass from the ground, and they were shot by snipers," a resident told CNN. "If you can imagine — people are dying just to eat grass."

But Yarmouk is far from the only refugee camp that has been caught in the crossfire. The UN estimates that "9.3 million Syrians in the country and 2 million outside are in urgent need of aid."The map below details the areas in Syria that are currently under siege:

On Saturday, the UN Security Council has passed a resolution demanding an end to restricting humanitarian operations in Syria. But it remains to be seen whether the warring sides will abide by it.