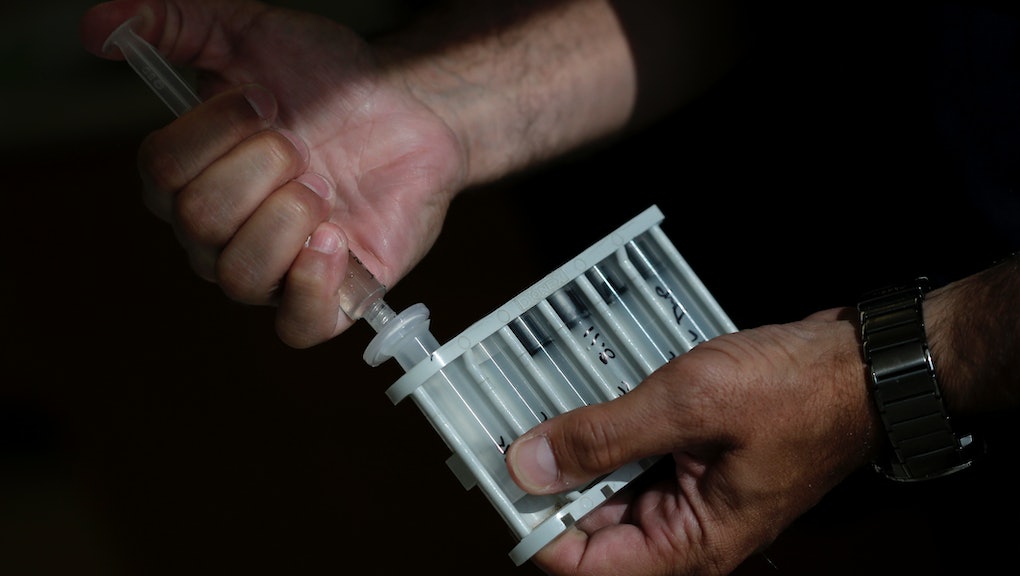 The news: The Internet is filled with plenty of tests that predict how much longer you have to live — all of which are definitely accurate — but now a group of Finnish researchers have developed a slightly more accurate test they claim can predict the chance of a healthy person dying from any medical condition in the next five years ... a "death test."

"It was a pretty amazing result," said research professor Markus Perola of the Institute for Health and Welfare, Finland. "First of all we didn't really believe it. It was astonishing that these biomarkers appeared to actually predict mortality independent of disease."

The researchers found that levels of four "biomarkers" in the body, when examined together, indicated a general level of frailty, and those people with the wrong levels of these biomarkers were five times more likely to die within five years of the initial blood test.

"What is especially interesting is that these biomarkers reflect the risk for dying from very different types of diseases such as heart disease or cancer. They seem to be signs of a general frailty in the body," said Dr. Johannes Kettunen of the Institute for Molecular Medicine in Finland.

A group of Estonian researched initial found the results after testing nearly 10,000 people, but were so astonished by the results they asked the Finnish scientists to try to replicate their findings — they had the same results and were just as stunned.

"If the findings are replicated then this test is surely something we will see becoming widespread," said Perola.

"We believe that in the future these measures can be used to identify people who appear healthy but in fact have serious underlying illnesses and guide them to proper treatment," added Kettunen.

The findings were published in PLOS Medicine.

The background: In general, a biomarker is a biological molecule found in the body (blood, fluid or tissues) that can indicate abnormal functions. There are hundreds of biomarkers in the body, all of which can indicate a patient's risk of a specific condition — cholesterol, for example, is a biomarker for heart disease.

For their test, researchers monitored over 100 biomarkers from the blood samples of over 17,000 generally healthy people over five years. In that time, 684 people died from a range of illnesses and the researchers noticed they all had similar levels of four distinct biomarkers: albumin, alpha-1-acid glycoprotein, citrate and the size of very-low-density lipoprotein particles. This unique blend of biomarkers was what blew the researches away and potentially opened the floodgates into a new space in preventative medicine.

The takeaway: If these results can continue to be replicated and the findings confirmed, it's possibly doctors could have a much easier time diagnosing seemingly healthy people and potentially saving their lives. "These were all apparently healthy people but to our surprise it appears these biomarkers show an undetected frailty which people did not know they had," said Perola.

However, like so many other medicinal discoveries, the "death test" automatically raises a series of questions in biomedical ethics. Most specifically: if a disease cannot be cured, only detected, would a patient want to know? Would you want to know you'd be dying in the next five years? It's a tricky question, but arguably these gray areas shouldn't prevent the advancement of a very interesting and potentially life-saving science. Thanks anyways deathclock.com.