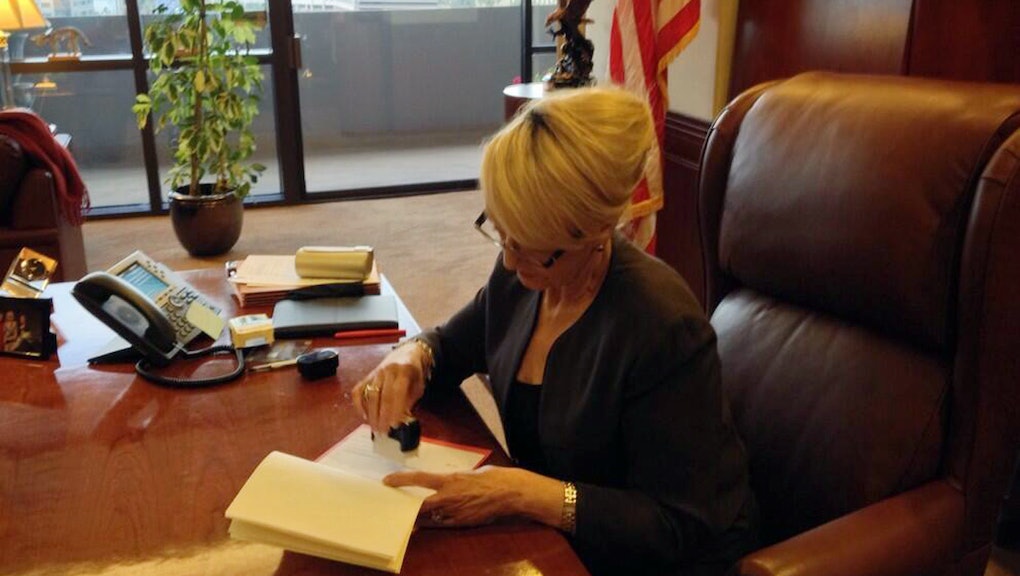 Pop that bubbly, America. Even Arizona's conservative governor knows when to fold 'em.

Following a flurry of national criticism, including pressure from major U.S. companies and political big shots, Gov. Jan Brewer vetoed a bill that would have allowed business owners to justify their actions on grounds of religious belief, essentially making it legally defensible for businesses to refuse service to gay people.

"The bill is broadly worded and could result in unintended and negative consequences," Brewer said in a statement. "The legislation seeks to protect businesses, yet the business community overwhelmingly opposes the proposed law. Moreover, some legislators that voted for the bill have reconsidered their votes and now do not want this legislation to become law."

To be fair, this isn't the first time that Brewer vetoed this legislation. In May 2013, she blocked a similar bill. However, at the time, the decision was viewed as a tactical move in the midst of budget negotiations. Sure enough, the legislation reared its ugly head again less than a year later.

Brewer is not generally known as a friend to the LGBT community. In 2009, she signed a bill that removed the right of domestic partners to receive state employee benefits. But she denied that her decision this time was due to mounting pressure, saying, "I call them like I see them despite the cheers or boos from the crowd."

Whether she was listening to them or not, those "boos from the crowd" had been growing louder for days. Ever since the Arizona House voted 33-27 in favor of the religion rule last Thursday, following a 17-13 majority in the Arizona Senate on Wednesday, politicians and corporations have come out en masse in opposition to the bill.

Republican senators Adam Driggs, Steve Pierce and Bob Worsley expresed their own change of heart after originally voting for the bill — meaning the bill would not have passed the Senate if they had made their minds up a few days earlier. In a letter urging Brewer to veto the bill, the senators said the bill has been "mischaracterized by its opponents as a sword for religious intolerance," adding that the "allegations are causing our state immeasurable harm."

Businesses worried about economic side effects ultimately played a big part in the opposition effort, banding together against the bill. Apple, which is about to open a factory in Mesa, and American Airlines, which recently merged with Phoenix-based U.S. Airways, both called on Brewer to veto the legislation. Other companies backing the cause included AT&T, Yelp and Intel.

As the backlash grew, Republican top dogs also began to speak out against the bill, including Mitt Romney, Newt Gingrich and John McCain — as well as his daughter, writer Meghan McCain, who said Brewer was running the risk of being "the governor remembered for legalizing discrimination."

Even the Super Bowl committee said they were keeping an eye on the situation, following suggestions that the NFL relocate the Super Bowl if Arizona passed the bill. It would have been an embarrassing echo of 1993, when the NFL moved the Super Bowl from Arizona after the state refused to celebrate Martin Luther King Day.