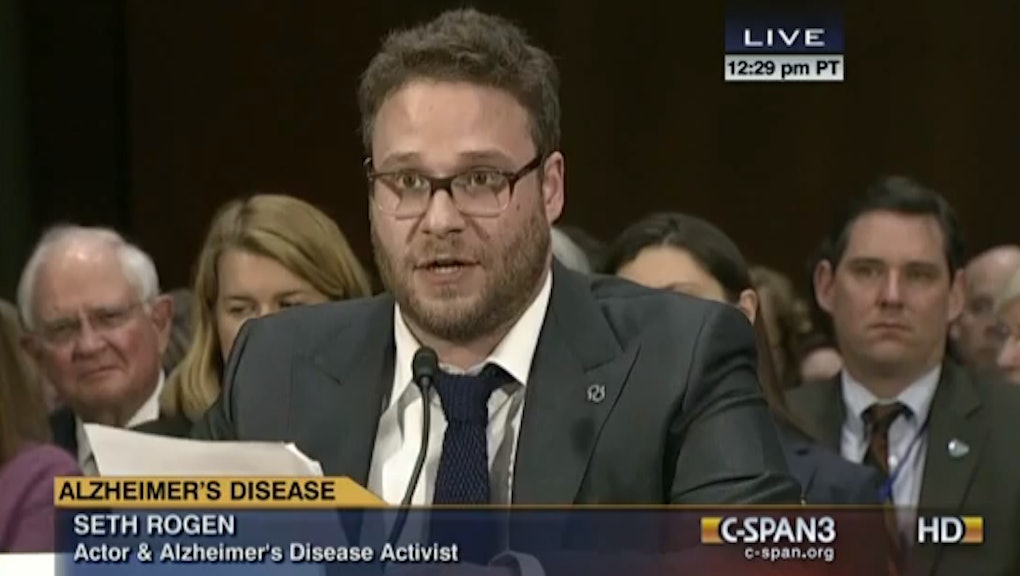 The news: Comedic actor and self-described “lazy, self-involved man-child” Seth Rogen testified before a U.S. Senate subcommittee on Wednesday, urging politicians to play a more active role in combating Alzheimer’s disease. His heartfelt and humorous speech detailed his family’s struggle with the affliction since his mother-in-law’s diagnosis at age 55:

According to the National Institute on Aging, Alzheimer’s is an irreversible and progressive brain disease that results in memory loss and the erosion of basic thinking skills. Experts estimate that as many as 5.1 million Americans may have it. Symptoms usually appear after age 60, but can begin earlier in some cases.

Rogen started his speech by admitting his initial lack of awareness regarding the disease: “My impression of Alzheimer’s was probably what I assume most people’s impression is,” he said. “I thought it was something only like really, really old people got, and I thought the way the disease primarily showed itself was in the form of forgotten keys, wearing mismatched shoes and being asked the same question over and over.”

But as time progressed, his mother-in-law’s symptoms worsened: “After forgetting who she and her loved ones were, my mother-in-law, a teacher for 35 years, then forgot how to speak, feed herself, dress herself and go to the bathroom herself. All by the age of 60.”

He also described the disease’s daunting financial burden. “People need more help,” he said. “I’ve personally seen the massive amount of financial strain this disease causes, and if the American people ever decide to reject genitalia-driven comedy, I will no longer be able to afford it.” In 2012, Rogen and wife Lauren Miller founded the Hilarity for Charity organization to help relieve this strain. Hilarity sponsors a comedy event that raises money to help families struggling with Alzheimer’s care, to increase nationwide support groups and to fund research.

Rogen ultimately expressed hope that his testimony would spur greater funding, raise awareness and alleviate some of the stigma attached to the disease: “Americans whisper the word ‘Alzheimer’s’ because their government whispers the word ‘Alzheimer’s,’” he said. “It needs to be yelled and screamed to the point that it finally gets the attention and the funding that it deserves and needs.”

But the conversation didn’t end there. Shortly after the hearing, Rogen took to Twitter to express his disappointment with the lukewarm reception his testimony received from numerous Senators:

According to the Alzheimer’s Association, a national advocacy leader fighting the disease, research and treatment in the U.S. are critically underfunded. Alzheimer’s is the sixth leading cause of death in America, and cost the nation an estimated $203 billion in 2013. At the current rate, that number is expected to rise to $1.2 trillion by 2050.

Time will tell if Rogen’s testimony pushes the government to make funding a greater priority in the coming years.