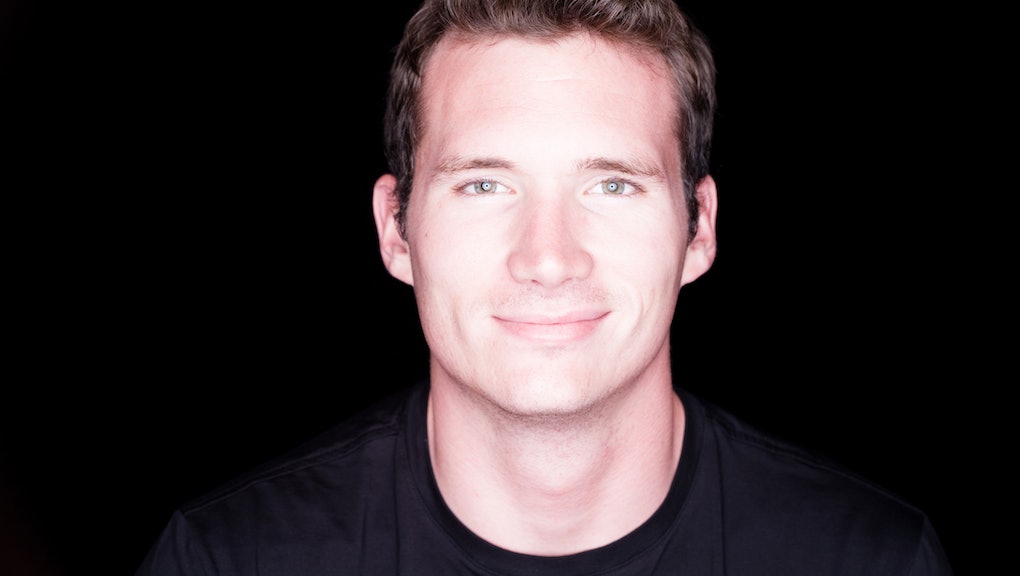 I Was Shot 4 Times in the Deadliest Massacre in U.S. History

Since Colin Goddard's parents both worked in the field of international development, he grew up all over the world. He was born in Kenya, and lived in Somalia, Bangladesh and Indonesia. Goddard, 28, was a high school student in Cairo during the Sept. 11 attacks. His family members back in the U.S. always worried about his safety, so they were thrilled and relieved when he returned to the U.S. in 2003 to attend Virginia Tech. But it was there, in Blacksburg, Va. — not in Nairobi, Mogadishu or Cairo — that he faced the most dangerous, horrific situation of his life.

It was a typical Monday morning during the spring of his fourth year, April 2007. Goddard was going about his Monday morning routine, making his way to his 9 a.m. French class in Norris Hall. He picked up his friend Kristina in his black Acura Integra, the two arrived a few minutes late and found seats a few rows back.

About halfway through class, Goddard's friend, Rachael, came in and quickly sat down in an available seat in front. It was out of character for her to be so late; she was one of the best students. She whispered to a few people behind her that her dorm had been on lockdown after a supposed shooting that morning. (Records indicate that the shooting had occurred around 7:15 a.m., and two students were killed.)

It wasn't the first time the school experienced a security incident. In fact, on the first day of class that year, the entire campus was on lockdown because William Morva, an escaped convict, was thought to be roaming in the school's vicinity. He was caught and no students were harmed.

About five minutes after Rachael came into class, Goddard described hearing a "bang, bang, bang," but was sure it was coming from outside. The teacher paused and looked concerned, but the students told her that it was probably just the nearby building that was under construction.

About a minute later, the blasts were much closer. The teacher cracked the wooden door open to peek out. "This time," Goddard said, "her expression dropped." She told everyone to get down and told someone to call for help. Goddard dialed 911 for the first time in his life. When someone picked up, he hurriedly stated, "Norris Hall," assuming he'd been connected to a local emergency line. But the person had no idea what Norris Hall was. "Norris Hall, Virginia Tech University, Blacksburg, Virginia. America!" He tried to stay calm, but he was in complete disbelief of the words about to come out of his own mouth: Someone was shooting a gun in their building.

Seconds later, bullets were coming through the door. In the instant before he dove down, he caught a glimpse of a figure — a flash of brown combat boots, khakis and a holster over each shoulder.

Goddard dropped down on his right side between two rows of desk chairs. He kept 911 on the line. At this point in his recollection, his words slowed and his voice became somber. "Then he turned down our row."

He was shot just above his left knee. There was a fleeting "sharp sting," he said. "I felt it in my whole body." He smelled the gunpowder, which he thought smelled like fireworks. "I knew at that moment I'd been shot." But almost immediately, an intense numbness overcame his entire body. "There was no pain. … It was surreal." (In the 911 recording, Goddard is heard saying, "I'm hit," and cursing into the phone. His parents relayed this to him. He has never listened to the recording.)

The shooter left the classroom, but was not finished. He would return two more times. The second time, he was "more methodical," going up and down each row of desks. He approached Goddard again, and fired another shot. This time, into his left hip. The cell phone, still on the line with 911, flew out of his hand. Emily, a classmate lying nearby, picked up the phone and covered it with her hair to quiet the voices on the other end.

Goddard's sense of time was warped, but otherwise, he was "very much aware" of what was happening. "I was in total shock and disbelief. … There were times I closed my eyes, just trying to be somewhere else." His body remained numb and he kept his eyes closed, but his other senses became heightened. His hearing was acute. "I heard this … I'll never forget … this deep gurgling sound." He is almost certain it was the sound of somebody dying. He never found out who it was. He didn't want to.

He vaguely remembers shifting from his side to his back. The shooter entered the classroom for the third and final time. Goddard could decipher his location and movement based on the pitch and direction of the shot, or the sound of him changing a clip. "It was constant gunfire, so it was a sense of, 'Which one of these will I feel next?'"

The shooter approached Goddard again, and Goddard knew it. "I could feel him standing at my feet."

A third bullet grazed his chest and passed through his right armpit, forcing him onto his stomach and exposing his right side. A fourth shot landed in his right hip. He did not scream. He did not move.

There were more rounds of shots. Then, they stopped completely. The police were outside the classroom and trying to get in, yelling for help, but the teacher's body and a student's body were blocking the door. A student named Clay ran up and moved the bodies to let the officers in. Goddard heard the police enter and say, "Shooter down, shooter down!" That's when he realized: That final gunshot was one the shooter gave to himself. He'd committed suicide in the front of the classroom.

He reached up and hung his hand over a desk to make sure they saw him. The police grabbed his arms to drag him out. He caught one last glimpse of the room. He wishes he didn't. There were "people everywhere, blood everywhere." He did not see the body of the shooter.

He learned later that the whole ordeal had lasted about nine and a half minutes. He was couldn't believe it: He thought hours could've passed.

There were 17 people in Goddard's classroom that morning. He is one of only seven that survived. Emily, the girl who hid the cell phone in her hair, and Kristina, his friend who he drove to class that morning, both survived. Rachael, the girl who came in late and sat in front, did not.

Seung-Hui Cho, 23, shot and killed 33 people that day. The massacre remains the deadliest shooting by a single gunman in U.S. history.

It's been almost seven years since that day. Goddard's memories are gradually fading, but, he said, "There are certain things I will never forget." He's transformed the traumatic experience into a drive to action. He is now a senior policy advocate for Mayors Against Illegal Guns (MAIG), a national, bipartisan coalition of mayors, founded in 2006. The organization's central mission is to keep illegal guns out of dangerous hands.

Part of Goddard's work is legislative, and focuses specifically on background checks. It's not a coincidence. If proper record submission had been required in Virginia in 2007 for background checks, Cho would have never obtained the weapons he used in the horrendous rampage. He had a mental health adjudication from December 2005, when a Virginia special justice declared him mentally ill and said that he was "an imminent danger" to himself.

The work is demanding, exhausting and "unsexy," he says. But there are successes to celebrate: For example, just recently, on March 5, it was announced that Facebook would block users under 18 from seeing posts for gun sales, and also refuse to list postings for sales that do not require background checks or sales that would cross state lines. Last year, Colorado, Connecticut, Delaware and New York all passed laws tightening background check requirements.

It would be easy to assume that Goddard is an extreme anti-gun activist or a Second Amendment abolitionist. But make no mistake: He actually enjoys shooting, and has made many trips to the range. But he is clear about one thing.

"What happened on my campus was not somebody exercising his Second Amendment rights."