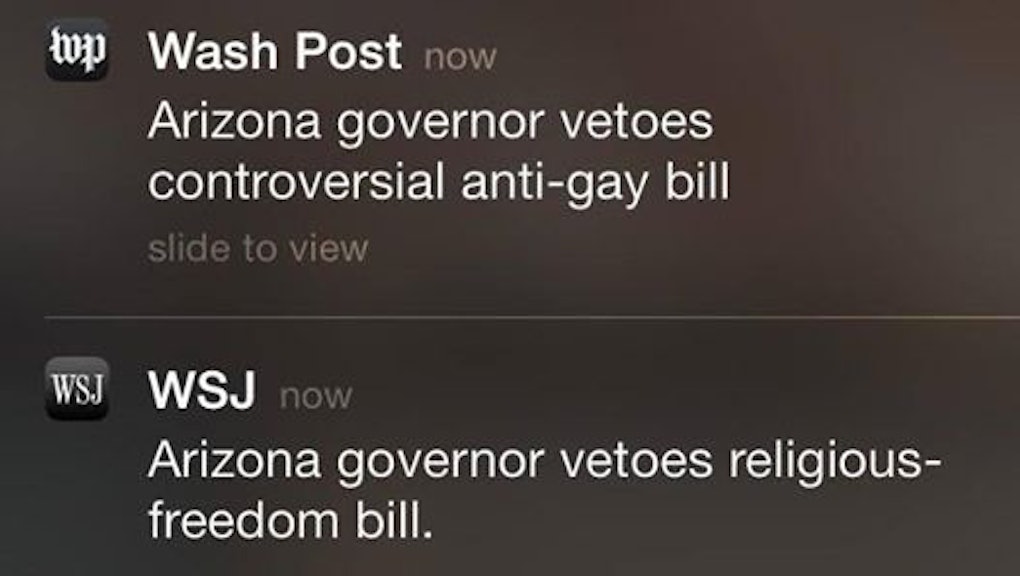 Arizona's SB 1062 — the bill that would have legalized discrimination by private businesses, corporations and their employees against LGBT people — has thankfully finally been vetoed by Gov. Jan Brewer. The governor waited until opposition to the dubiously named "religious freedom" bill reached a national crescendo before blocking it.

SB 1062 was approved by the Arizona legislature, and would have let businesses reject service to any customer based on the owners' religious beliefs. It would have also used these beliefs as protection in any ensuing discrimination lawsuit. While most detractors focused on the potential for discrimination against LGBT people, the law technically would have allowed any kind of bias: A Christian business owner could have denied service to a Muslim customer, and vice versa. The Ames Tribune's Hector Avalos called it a "recipe for a perpetually sectarian society, which is precisely what our Constitution tries to avoid."

This screencap of how the Washington Post and the Wall Street Journal covered SB 1062's defeat aptly sums up their respective takes on the issue:

Pretty striking difference, and one that had a lot of people on Twitter shaking their heads:

Was the outrage over SB 1062 misdirected? Probably not. LGBT people are not a federally protected class, so the bill would have allowed discrimination while denying victims recourse to any higher authority. The law was so broadly written that an employer could even find themselves at the mercy of a bigoted employee: Due to the bill's loose definition of "religious freedom," a business owner could witness an employee denying someone service based on religion and be unable to fire that person.

The Arizona Small Business Association also feared the bill's passage would negatively impact Arizona's image and tourist economy, potentially costing it the 2015 Super Bowl. Both of the state's Republican senators and many large companies demanded the governor veto the bill.

Finally, the SB 1062 would have done little to protect anyone's freedom. Instead, it would have made bigoted behavior the risk of patronizing an Arizona business. Even Gov. Brewer, who was torn between pleasing her right-wing base and making the state look barbaric, admitted there was no reason to support the bill from a religious freedom viewpoint: