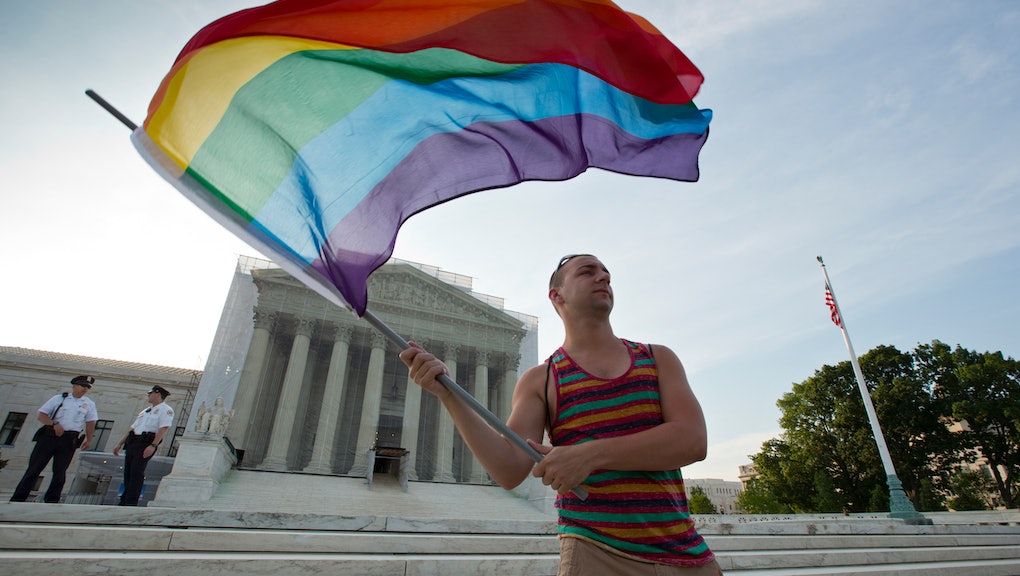 This has been an historic week for same-sex rights in America. Judges in both Texas and Kentucky — two states generally thought to be very conservative — ruled on cases and passed decisions striking down discriminatory laws against same-sex couples and breaking down a number of barriers faced by the LGBT communities in these states. Texas' ruling on Wednesday is the sixth in a row to rule marriage discrimination unconstitutional in America since the Supreme Court said the federal government must recognize same-sex marriage last June in United States v. Windsor

Here's what the judges in the six most recent rulings said in their decisions.

"After careful consideration, and applying the law as it must, this Court holds that Texas' prohibition on same-sex marriage conflicts with the United States Constitution's guarantees of equal protection and due process. Texas' current marriage laws deny homosexual couples the right to marry, and in doing so, demean their dignity for no legitimate reason. Accordingly, the Court finds these laws are unconstitutional and hereby grants a preliminary injunction enjoining Defendants from enforcing Texas' ban on same-sex marriage," United States District Judge Orlando L. Garcia said in a Feb. 26 ruling.

"In the end, the Court concludes that Kentucky's denial of recognition for valid same-sex marriages violates the United States Constitution's guarantee of equal protection under the law, even under the most deferential standard of review. Accordingly, Kentucky's statutes and constitutional amendment that mandate this denial are unconstitutional," U.S. District Judge John G. Heyburn II said in a Feb. 12 ruling. On Thursday Feb. 27, Heyburn issued a final order throwing out the state's ban on gay marriage. In his ruling, Judge Heyburn only found that the state must recognize out-of-state same-sex marriages. A related separate lawsuit seeking to force the state to issue marriage licences to same-sex couples is still pending.

"The court is compelled to conclude that Virginia's Marriage Laws unconstitutionally deny Virginia's gay and lesbian citizens the fundamental freedom to choose to marry. Government interests in perpetuating traditions, shielding state matters from federal interference and favoring one model of parenting over others must yield to this country's cherished protections that ensure the exercise of the private choices of the individual citizen regarding love and family," U.S. District Judge Arenda Wright Allen said in a Feb. 13 ruling.

"Equal protection is at the very heart of our legal system and central to our consent to be governed. It is not a scarce commodity to be meted out begrudgingly or in short portions. Therefore, the majority view in Oklahoma must give way to individual constitutional rights," U.S. District Judge Terence Kern wrote in his decision filed on Jan. 14. This decision is especially interesting in its appeal to rights and justice over majority rule. Even if 51% of people want something, if that something is wrong, unjust or unconstitutional, there are mechanisms in our legal system to prevent those evils.

"The court hereby declares that Amendment 3 is unconstitutional because it denies the Plaintiffs their rights to due process and equal protection under the Fourteenth Amendment of the United States Constitution," Judge Robert J. Shelby, of the United States District Court for the District of Utah, wrote in his opinion filed on Dec. 20. Federally, the 14th amendment does not cover sexual orientation, but rulings like this expand each state's individual legal discrimination coverage.