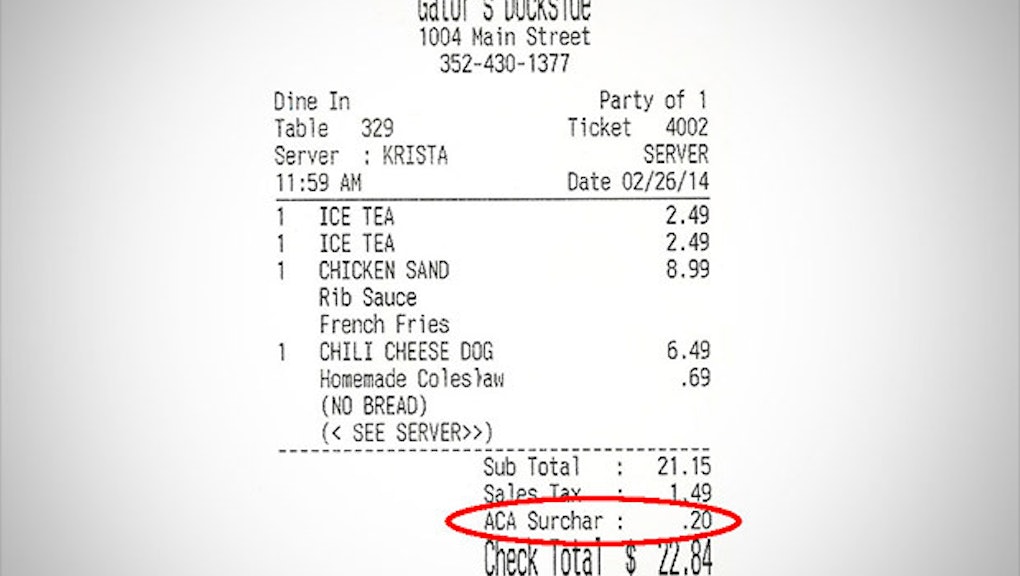 Everything Wrong With America, in One Picture

Eight Gator's Dockside restaurants in Florida have started charging their customers for what they claim are Obamacare compliance costs, despite their employees not actually receiving any insurance until the end of the year. And they're advertising it on the bill and on signs on their windows and doors.

"The costs associated with ACA compliance could ultimately close our doors. Instead of raising prices on our products to generate the additional revenue needed to cover the costs of ACA compliance, certain Gator's Dockside locations have implemented a 1% surcharge on all food and beverage purchases only," the signs read.

According to Sandra Clark, the group's director of operations, Gator's Dockside employs about 500 people, of which around half are full-time employees. Management already gets insurance, but the full-timers on staff don't. Clark wasn't able to come up with a specific figure but claims it will cost $500,000 a year to provide health insurance for all of its full-time employees, with the surcharge paying for about $160,000.

Despite Gator's Dockside's fevered claims of imminent closure due to increased labor costs, it seems unlikely that a 1% surcharge is going to tank a $16 million business. It seems like Gator's Dockside doesn't like paying its staff a legally-mandated minimum standard of living. Cute attempt at getting some anti-Obama publicity, though — time to add some Medicare surcharges, health inspection surcharges, green surcharges, and everything else Florida's Republicans don't like.

But let's take them at face value and look into the claim that Obamacare is going to cripple small businesses like their own.

Will the ACA raise costs for small businesses (assuming a chain with eight locations even counts as a small business)? Well, some. About 3% of them. Of the nation's 5.7 million small businesses in 2010, 97% of them have fewer than 50 employees and thus aren't affected by the employer mandate to provide health insurance coverage.

And sure, for those 3% of small businesses, the ACA costs could be substantial. Spoilers, though. Of those businesses that would be affected, just 4% don't already provide health insurance.

OK, so some of the coverage provided doesn't qualify under Obamacare's new rules. But not many. According to NORC at the University of Chicago, about 99% of those in work-sponsored plans meet most ACA coverage standards.

Putting that all together, you get this:

Many plans will need adjustments, of course, the costs of which will ultimately be passed on to the employer, but much of that cost will be offset by tax credits and dramatically slowed growth in health care and premium costs.

It's possible that Gator's Dockside will see some increased costs, and if so, it's rather unfortunate for them. But it doesn't seem like the cost of providing their employees a fair deal on health care is either a crippling expense or reflective of the greater environment facing businesses dealing with the ACA.

Putting a 1% surcharge on all purchases seems like a petty way of forcing the business owners' political views on the customer. Would you like some rehashed Fox News talking points with your burger? Thanks to Gator's Dockside, it comes nearly free at every meal.

On the other hand, Los Angeles' Republique restaurant delivers bills with an optional 3% surcharge for their employees' insurance, which they didn't need the Affordable Care Act to force them into providing. So far, they say, customers have been more than happy to eat a minuscule price increase in exchange for helping out their servers.

Gator's: Stop pushing your politics onto my plate. It's not appetizing.