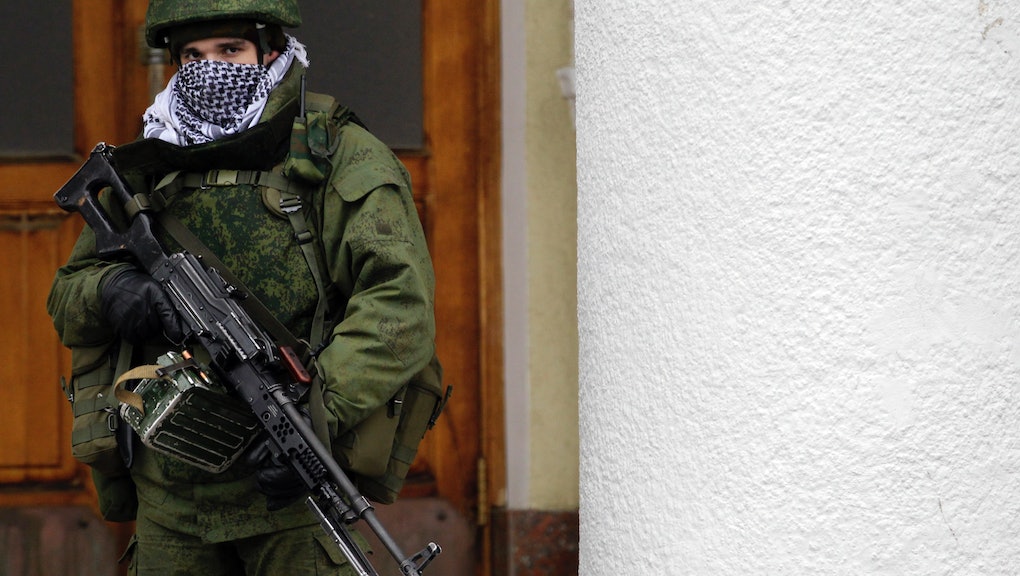 Did Russia Invade Ukraine? Here's What Happened While You Were Sleeping

Unrest in the Crimea grew on Thursday night as 50 gunmen took over the local airport, after occupying government buildings in the capital, Simferopol. The pro-Russian forces, who displayed a sign that read, "Crimea is Russia," have been protesting against the new government in Kiev. The conflict has reached such a boiling point that secession has become a real possibility overnight.

Another airport in Sevastopol has been occupied by an unidentified group, whom the Ukrainian government has accused to be Russian naval forces. Russia's Black Sea Fleet has denied involvement in blocking the airport.

According to the BBC, "eight trucks with the black plates of the Russian army" have been seen heading towards Simferopol, while eight Russian military helicopters have been sighted in Sevastopol.

"I consider what has happened to be an armed invasion and occupation in violation of all international agreements and norms," wrote Ukrainian interior minister Arsen Avakov on his Facebook page.

An increasing number of gunmen have been gathering in the Crimea, though they do not wear any identifiable insignia. "I'm with the People's Militia of Crimea. We're simple people, volunteers," one man told the BBC.

Tension has been increasing in the region since the pro-Russian regime was ousted after months of protest, and replaced this week by an interim government with opposition leaders.

The change has not been welcomed in the Crimea, only became a part of Ukraine in 1954, when Soviet leader Nikita Khrushchev transferred it under his power. It is the only region of Ukraine where ethnic Russians outnumber other ethnic groups, though there is are significant Russian populations in other regions. The group wants either a pro-Russian Ukraine or a full secession.

But the region is also home to the Tatars, who support the new government. The ethnic group, which is largely Muslim, was deported from the Crimea during World War II by Josef Stalin. Most Tatars were only able to return to their homeland following the collapse of the Soviet Union in 1991, and would not like to see the Crimea return to Russian influence.

The crisis has also put Ukraine's fragile new government to the test merely days after its takeover, with military troops and the police on high alert to handle the evolving crisis in the Crimea. The government has closed off the region "to prevent bloodshed."

"Measures have been taken to counter extremist actions and not allow the situation to escalate into an armed confrontation in the centre of the city,'' said Avakov.

The fledgling government has also warned Russia against any kind of "military aggression" in the area. Russian troops have been on alert in the western border, although they maintain it's for a regular exercise.

While Russian President Vladimir Putin promised to hold off on a military intervention for now, he has granted asylum to Ukraine's ousted president Viktor Yanukovych. The Ukrainian government put out a warrant for Yanukovych's arrest, though the former leader has called the new interim government "illegitimate."