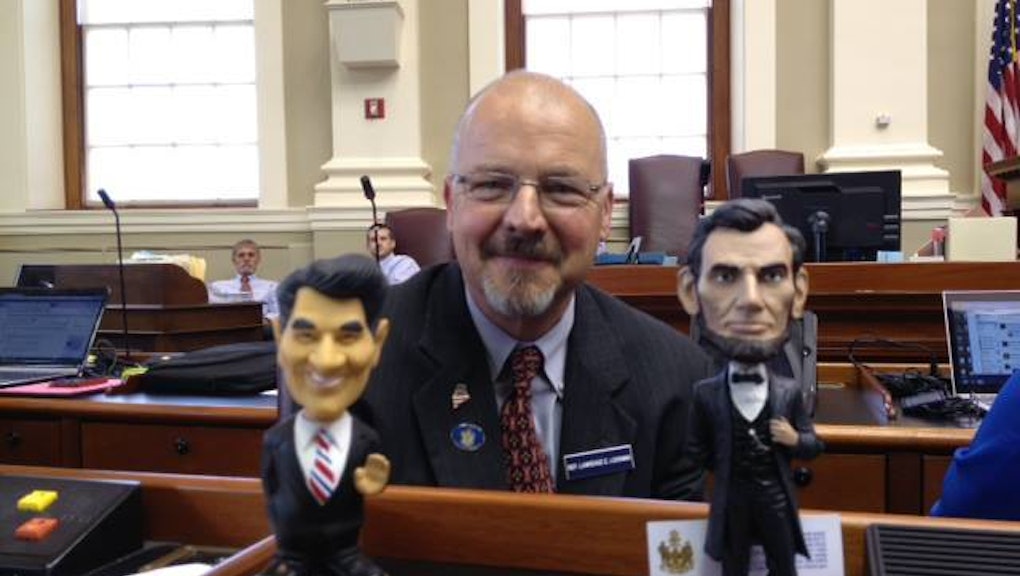 Ladies and Gentlemen, the Most Homophobic Politician in America

A few delightful Republicans have earned their party a bad reputation for spouting derogatory opinions about women, homosexuality, abortion, rape or race. But this Republican state representative just blew them all out of the water.

Lawrence Lockman was elected to the Maine House of Representatives in 2012, but he and his intolerant views have been polluting that fresh New England air for decades. Political blogger Mike Tipping ploughed through years of Lockman's comments and campaigns and uncovered some real gems.

The astonishing buffoonery appears to have started in the early 1980s, when the outspoken Lockman began sounding off against state and federal taxes, calling them voluntary, unconstitutional and "repugnant to American values" as a founder of a group called the Maine Patriots. He stopped paying his dues in 1975, and by the mid-'90s had racked up more than $50,000 in unpaid taxes.

Turns out the Maine Patriot was just getting started, however.

During the '80s, Lockman took it upon himself to save the world from AIDS and "the pervasive influence of militant, politically-organized homosexuals" by campaigning against funding for AIDS education. In a 1987 letter to the editor of a local paper, Lockman said the virus could be spread by bed sheets and mosquitoes, but in most cases, "People are dying because of their addiction to sodomy":

They are dying because progressive, enlightened, tolerant people in politics and in medicine have assured the public that the practice of sodomy is a legitimate alternative lifestyle, rather than a perverted, depraved crime against humanity.

In later years Lockman would argue, "The practice of sodomy is learned behaviour, and those addicted to this form of biologically-insane sex are at high risk for all manner of serious medical problems."

And we're still not done.

A couple of years later, Lockman struck again. "If a woman has (the right to an abortion), why shouldn't a man be free to use his superior strength to force himself on a woman?" he was quoted as saying in the Lewsiton Sun Journal. "At least the rapist's pursuit of sexual freedom doesn't (in most cases) result in anyone's death."

This, ladies and gentlemen, is the guy Maine decided to put on its committees for ethics and labor.

But don't worry. Lockman released a statement saying he "regrets" making these comments. So we're all cool, right? Probably not, judging from the flood of condemnation heading his way via social media.

We'll keep paying attention, though — there may be a few minority groups Lockman hasn't offended yet.